The 38 year decline in global interest rates is over.

Energy stocks are at the end of a major bear market.

Commodities are commencing a bull market.

The New Cold War is with China, Russia, Iran, North Korea and Venezuela.

The market needs to be irrationally exuberant to hit S&P 5905.

The 2020s will produce important new trends in the global markets which this letter will explore. The new investment themes for the 2020s are:

Since 1982, interest rates have been declining. In August 2019, when total international negative interest rate debt peaked at $17 trillion, the global trend in declining rates ended. 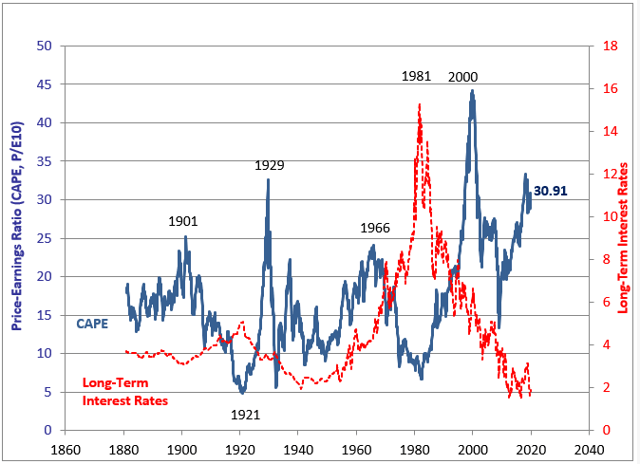 2. Energy will be a top performing sector

Fossil fuels will rebound and benefit from new technologies which reduce their toxic emissions and carbon footprints while continuing to play a major role in the global economy. The oil shaming, the "Greta Effect", Environmental Social and Governance "ESG" mandates--which are forcing "ESG divestitures"--have led to an extreme in sentiment and price performance that marks a sector bottom and trend reversal in the multi-trillion dollar a year global energy economy. In the decades ahead, a robust combination of green technologies, new technologies and fossil fuels will drive the energy sector.

Why, with their toxic emissions, will fossil fuels not fade away?

"In the United States, more than half of this pollution comes from transportation uses like cars, trucking, shipping, and planes. Despite some notable gains in battery-powered electric vehicles, much of this sector can still only be powered with fossil fuels. When it comes to mobile, dense energy storage, liquid fuels are simply very hard to beat, particularly since so much of the world's energy infrastructure is built around them" according to Hanna Breetz, an expert in alternative fuels and vehicle in an MIT Technology Review last year.

Last month, we recommended Kayne Anderson MLP/Midstream Investment Company (KYN), a diversified energy MLP closed end fund. KYN rallied with the abatement of tax loss selling; however, KYN should continue to rise as its yield is an exceptionally attractive 10.4% and in this historically low interest rate environment. KYN's high yield is indicative of high cash flows consistently found throughout the energy sector. KYN could rise another 20% in the coming months. 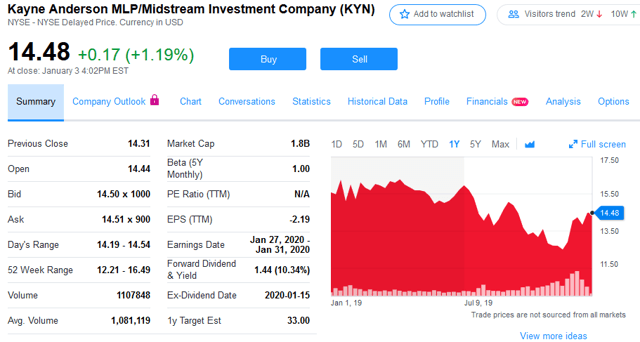 Since 2005, US oil production has grown from approximately 5mm barrels a day to 12mm barrels a day, driven primarily by horizontal drilling and hydrofracturing "fracking". This has allowed the US to become the largest oil producer in the world. Consequently, in recent years, the United States has become the largest source of incremental oil supply worldwide. However, due to the rapid deterioration of production associated with fracking, capital investment has begun to wane and this may be driving a resurgence in offshore drilling globally. The offshore drilling sector has been in a significant decline for over a decade. We have made some speculative investments in Seadrill Limited (SDRL) and Seadrill Partnership Limited (SDLPF) and see Diamond Offshore Drilling (DO) as a less risky offshore play.

Over the last 100 years, commodities have gone through cycles of outperformance relative to equities. The chart below shows the commodity sector to S&P 500 ratio bottoming and turning up. Now the index ratio is 0.137 which increasingly suggests that commodities are poised for outperformance. 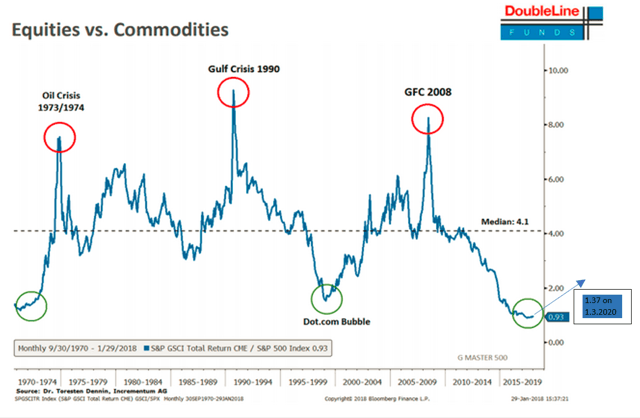 While the S&P 500 has been strong in 2019, gold and oil have also been strong. If interest rates are no longer declining, financial assets will be less valuable and commodity assets will be a better store of value and investment. Recent violence in the oil rich Middle East is boosting oil prices. Oil is the largest component of the GSCI index.

The chart below highlights periods of inflation and deflation over the last 100 years. It shows the outperformance of the S&P 500 (when the Producer Price Index is declining) during deflationary periods. The enormous cost savings created through technology, the internet and global transportation have helped to keep prices low over the last few decades. This technology cost benefit could be losing its marginal cost savings as we enter the 2020s. If the incremental rise in commodity prices outpaces the marginal cost benefits from technological innovation, a bullish commodity cycle will undoubtedly develop.

The key market factor for the last two years has been the sentiment surrounding the tariffs initiated by the Trump Administration to negotiate trade deals. The fear has been that the Trump Administration's use of tariffs with China and other countries would lead to reciprocal tariffs and cause a global recession or depression. That fear had a precedent in the Smoot Hawley Tariff Act of 1930 which accelerated the economic collapse during the Great Depression. With the United States Mexico Canada Agreement "USMCA" trade deal soon to be ratified and the signing of Phase One of the US China trade agreement imminent, the market's greatest fears have largely been eliminated.

The global economic uncertainty from the trade wars has had a disproportionately large impact on emerging market economies and their equity markets. In the years ahead emerging markets should be a good source of growth and outperformance.

While there are numerous diversified emerging market stock and bond investments, we have been buyers of the Templeton Emerging Markets Income Fund (TEI). TEI has an 8.5% yield and buys primarily sovereign debt in the emerging markets. This portfolio of government backed securities, managed by the renowned emerging market pioneer, yields nearly three times US 10-Year Treasury Notes. Due to the pressure of the trade wars on emerging markets abating, TEI should enjoy an attractive lift beyond its compelling yield proposition.

The trade war with China has changed the public view of China from what was generally believed before the Trump Administration took office. Today, China is seen as a global superpower both economically and militarily, which, left unchecked, will dominate the globe both economically and militarily. Further, Russia continues to test the global community by extending its reach into the Ukraine, Georgia, Crimea, Syria, Cuba and Venezuela. Both Iran and North Korea continue their belligerent behavior toward the United States and others around the globe. Further, both Iran and North Korea have to work diligently to develop nuclear weapons which could hit the United States and our allies. Another problem state is Venezuela, which, while not a military threat to the US, certainly is a potential proxy of China, Russia, Iran and other bad actors.

Since World War II through the collapse of the Berlin Wall, there has been an idyllic belief in the "American Way" where our institutions of democracy and capitalism will ultimately prevail leading to world peace. Recent decades have shown these potent rivals are not transitioning to democracy and capitalism. Rather, these forces are pushing back. This set of factors suggests an environment where a New Cold War is developing with respect to China, Russia and others.

In recent months, we turned bullish, as the impending risks associated with a global economic recession, US-China trade war, Presidential Impeachment and Brexit failed to materialize. To analyze the market, we use the Federal Reserve Risk Premium Model to assess how high the S&P 500 could rise. In early December we estimated the S&P 500 could get to 5905, an 88% rise. The valuation target assumed the same level of irrational exuberance--Risk Premium 1.2--as was exhibited during the market peak in 2007. This psychological Risk Premium level was subjective, though our market optimism remains firm. 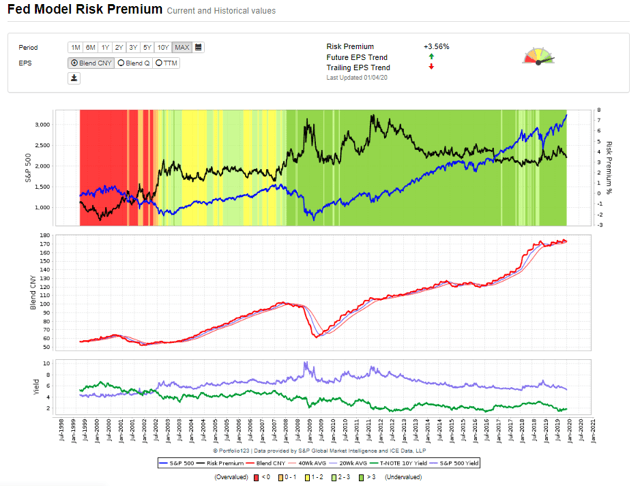 The data set below shows the Risk Premium components at varied key times over the last 21 years:

The recent decades' stock market strength and high valuations have been driven by the unprecedented Central Bank accommodations since the financial collapse in 2008. Though, extreme accommodation's first roots sprouted during Greenspan's days as Federal Reserve Chairman--leading to the term "the Greenspan put." [Meaning--Don't worry the Fed will always lower interest rates to bail out the stock market so you can throw prudent investment caution to the wind.] In order to continue to see strong global equity markets, revenue and earnings growth should rotate to those sectors which have not been direct beneficiaries of the extreme accommodation. We believe the rotation from growth to value began in September and could last several years.

Our thesis for commodity and emerging growth would certainly benefit from positive news in the New Cold War as would the S&P 500. If international relations and economic engagement improve with China, Russia, North Korea, Iran and Venezuela, the next decade could easily extend this ten-year old bull market much further and farther. In the absence of continued financial accommodation, the defensive themes we have identified should de-risk and improve your portfolio asset allocation decisions and help your investment selection in the coming years.

Follow Tyson Halsey, CFA and get email alerts
+
Add a comment
Disagree with this article? Submit your own.
To report a factual error in this article, click here.
Your feedback matters to us!