Apellis Pharmaceuticals (NASDAQ:APLS) reported positive phase 3 results of pegcetacoplan (APL-2) in PNH patients. Pegcetacoplan, the company's C3 inhibitor, managed to beat Alexion Pharmaceuticals' (ALXN) eculizumab (Soliris) on the primary endpoint and to show positive trends on multiple secondary endpoints. Safety and tolerability were not perfect, but I think Apellis has a competitive drug and that it can at least capture the underserved PNH patient population - those with an inadequate response to Soliris. However, the PNH treatment landscape is evolving, and Alexion and other potential competitors are not too far behind with their own options to address the limitations of C5 inhibitors such as Soliris and Ultomiris.

But I don't think PNH is an indication that can justify Apellis' current valuation. Luckily, it may not have to since Apellis has other and potentially far more valuable shots on goal than PNH. The potential of pegcetacoplan in geographic atrophy ('GA') dwarfs the PNH market opportunity, and Apellis has other shots on goal as well. The importance of the PNH trial was not only to show superiority to Soliris on the primary endpoint, which it did, but to also strengthen the perception of pegcetacoplan's safety profile, and the PEGASUS trial did that as well.

I have a generally bullish long-term view on Apellis but would note the catalyst calendar is light in the next few quarters. 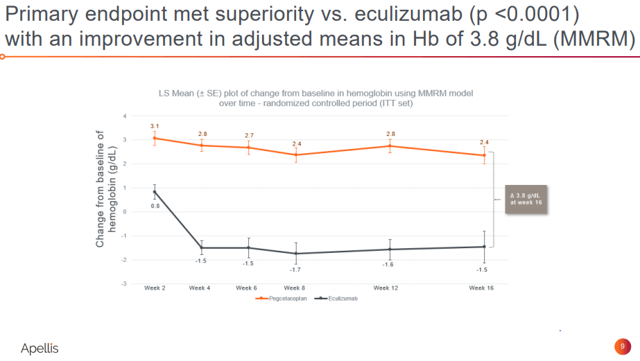 Three of the four key secondary endpoints were also met (non-inferiority to eculizumab) though the fourth was not measured statistically due to the failure of the third hierarchical endpoint to reach statistical significance. Transfusion avoidance, reticulocyte count, and FACIT fatigue scores clearly favored pegcetacoplan. 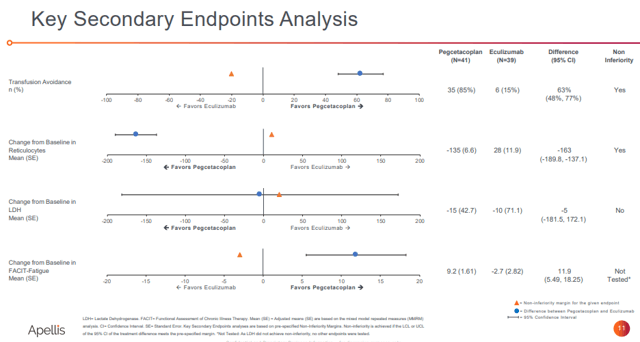 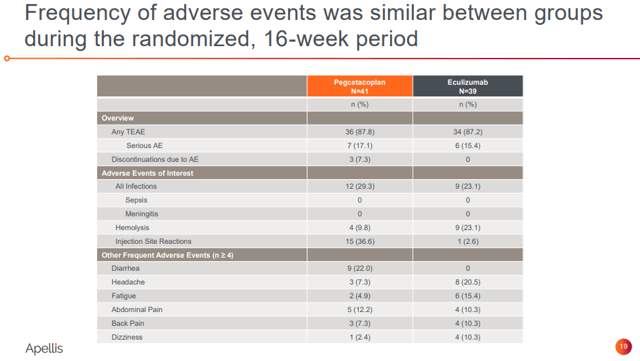 Overall, I believe the benefit-risk clearly favors pegcetacoplan - higher hemoglobin levels, improved fatigue scores, transfusion avoidance, lower rates of hemolysis, and headache on the benefit side and mild injection site reactions and diarrhea on the side of eculizumab. The company also noted that all 77 patients who completed the study choose to enter the open-label extension phase of the study on pegcetacoplan, which I think speaks to the safety and tolerability profile of the drug but also to its efficacy and improved quality of life for these patients.

I believe pegcetacoplan will be well-positioned against Soliris and Ultomiris and that it will at least capture the patient population that is not getting enough from Soliris and Ultomiris. I would estimate the annual sales opportunity in the $400-500 million range and would value the PNH indication in the $15-20 range.

Apellis is also running a phase 3 study of pegcetacoplan in treatment naïve PNH patients which should expand the label to include the whole population rather than just the inadequate responders to C5 eculizumab. I believe this study will show positive results.

However, if I were an Alexion investor, I would not be too concerned about pegcetacoplan as I think it will have a modest impact on C5 franchise sales in the following years, and Alexion has a broad portfolio of indications other than PNH and an expanding pipeline. I also wouldn't consider Apellis as an investment if PNH was the company's only shot on goal.

Apellis noted it will meet with regulatory agencies in the first half of 2020 to discuss the requirements for regulatory submissions. The FDA said that, for approval in PNH, "hemoglobin stabilization in conjunction with change in transfusion dependence constitute accepted clinical benefit, but that a rise in hemoglobin levels may not translate to clinical benefit in patients who entered the trial with high hemoglobin levels, such as permitted by the inclusion criteria of the PEGASUS trial, and who do not require transfusions."

An additional potential problem is pegcetacoplan not meeting non-inferiority on LDH which was the primary endpoint in PNH studies conducted by Alexion with Soliris and Ultomiris.

The company thinks the results support the finding of a clinical benefit and that's a benefit over the existing standard of care. So, the regulatory path is not completely clear, and we would need some clarity on this issue, but I think this is a solvable issue considering the results. And Apellis should soon have supporting results from the second phase 3 study in treatment-naive PNH patients.

The second issue for pegcetacoplan in PNH is the competition. Alexion has clearly anticipated a threat in the PNH market and has made a defensive move of acquiring Achillion (OTC:ACHN) for its factor D inhibitors. I think that Achillion's danicopan in combination with Soliris or Ultomiris is likely going to work similarly to pegcetacoplan in PNH patients. The clinical data reported to date are positive and patients taking the combo experience improvements in hemoglobin levels and see a significant decrease in transfusions compared to eculizumab alone. 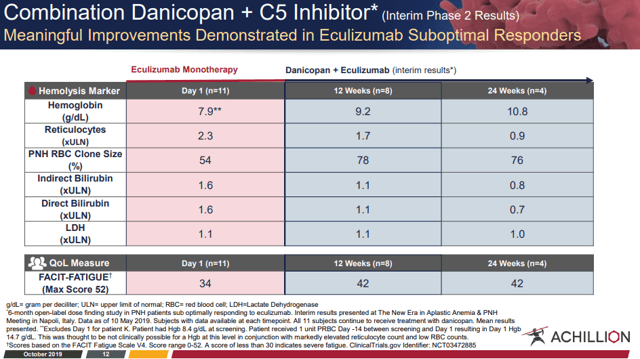 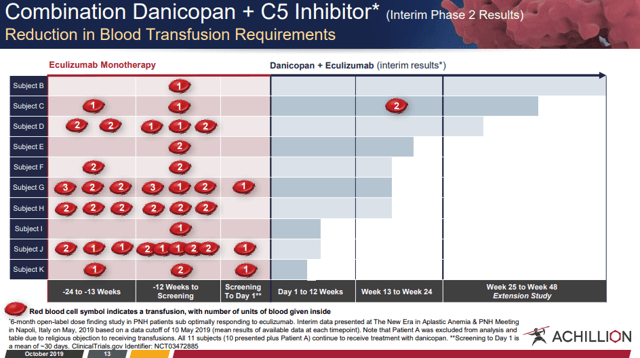 And Achillion's second-gen factor D inhibitor ACH-5228 may work well as monotherapy in PNH patients. That was Achillion's goal with danicopan, but danicopan alone cannot achieve sufficient alternative pathway inhibition (ACH-5228 is more potent and does achieve that, at least in healthy volunteers).

Similarly, BioCryst (BCRX) has what appears to be a potent alternative pathway inhibitor based on phase 1 data and the company is targeting PNH as the first indication as well. Combinations of BioCryst's BCX9930 and eculizumab and/or biosimilar eculizumab down the road may also be competitive to Alexion's C5 inhibitors and Apellis' pegcetacoplan.

There are also many other C5 inhibitors in development, which may not deliver better efficacy than pegcetacoplan, but may lead to net price erosion in the C5 inhibition market (along with biosimilar eculizumab), affecting pegcetacoplan's pricing power.

Value creation potential is much greater in other indications

Luckily, PNH is only the first shot on goal for pegcetacoplan. I believe the true value creation potential for Apellis is in other indications.

The company is conducting a phase 3 trial of pegcetacoplan in geographic atrophy ('GA') and expects to report results in mid-2021. This is by far the largest market opportunity for pegcetacoplan as it could generate $2 billion or more in annual sales. For example, Roche's factor B inhibitor lampalizumab was expected to reach $2 billion in annual sales in GA (and up to $4.5 billion) but won't as it failed in a phase 3 study.

Pegcetacoplan reported positive phase 2 results in GA, and if the results are repeated in the phase 3 study, Apellis is likely to be worth 2-3 times the current share price and potentially more in the long run. However, I would note that lampalizumab also demonstrated positive effects in a phase 2 study in GA but failed in the phase 3 study, so, success is not guaranteed here.

Two additional shots on goal for pegcetacoplan are cold agglutinin disease ('CAD') and C3 glomerulopathy ('C3G'). The company will provide an update on these two programs in the following months. Initial results in CAD were promising, and so were the results in C3G.

Apellis should be well-capitalized after completing the secondary offering

Apellis ended Q3 2019 with $434 million in cash and equivalents, and the company announced a 7 million share offering this week and upsized it to 9.5 million shares which should bring in around $340 million in net proceeds and up to $400 million if underwriters take the additional 1.4 million shares. In the prospectus, the company said it had $352 million in cash at the end of 2019 which suggests an end of 2019 pro-forma cash balance in the $690-750 million range or approximately 8-9 quarters of cash based on the Q4 2019 cash burn. Apellis is now well-capitalized into 2021, but I think the company will need to raise cash again in late 2020 or 1H 2021.

2020 is off to a great start for Apellis. The outcome of the PEGASUS trial was clearly positive, and the results have met the company's and investors' expectations. However, I don't think PNH alone is enough to justify the current valuation and the competitive landscape is evolving rapidly. That may not be a problem for Apellis in the long run as it has one or two interesting and larger pipeline opportunities, such as geographic atrophy and cold agglutinin disease, while the third opportunity in C3G is relatively small due to it being an ultra-orphan disease. C3 inhibition also has many other potential applications, and I would expect Apellis' pipeline to expand in the following years.

I publish my best ideas and top coverage on the Growth Stock Forum. If you're interested in finding great growth stocks, with a focus on biotech, consider signing up. We focus on attractive risk/reward situations and track each of our portfolio and watchlist stocks closely. To receive e-mail notifications for my public articles and blogs, please click the follow button. And to go deeper, sign up for a free trial to Growth Stock Forum.