We're interested in the employment numbers because we want to try and predict both what's happening to the economy and also what the Federal Reserve might do about it. The correct answer from these most recent numbers is that the Fed's going to do nothing. For while we've got a seemingly exciting set of numbers, I think this is just a bit of statistical variance rather than anything changing in the underlying economy.

Yes, obviously, it would be a bit more exciting if something else were happening, but I don't think there is.

Which is a pretty good number. Especially as, last month, they had only 67,000. Does this mean that the economy's beginning to roar again? My contention is no, it doesn't.

For when we looked at last month's numbers, we saw that it was the ADP number which seemed out of whack with our others - it was too low.

So, what is actually happening?

This chart from Moody's Analytics aids in understanding: 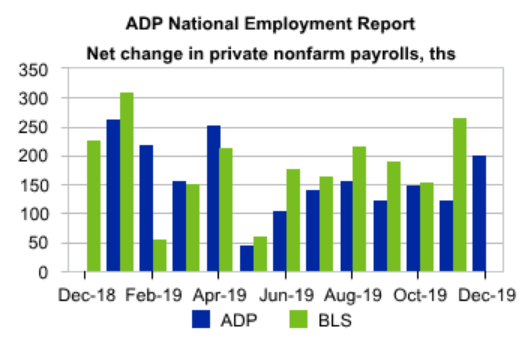 As we can see, the numbers do tend to move in the same sort of direction but not in lockstep. By mathematical necessity, therefore, one of them can be a little out of step with the other, but then, they meet again at some future date.

We need to understand sampling

It's important to understand that neither of these numbers is an actual count of everyone employed across the country. No one really does keep accurate records of that, and they're certainly not processed centrally on a monthly basis. Everything, but everything, is based upon samples of the population.

The ADP numbers, well, the company's a payroll processor. So, count up the number of new payrolls they're processing, subtract those they've stopped doing, and we get a number. We then try to match that up to some estimate of what portion of the economy ADP is going the processing for. Well, OK, but we can see that errors can creep in. One that is being hinted at here is that companies sometimes don't strike people from the payroll in December, leaving them until year end. Thus, ADP overstates this month. I'm not sure about that, just offer it as something being said.

The BLS numbers, they're of the whole economy, but they again are a survey. There will be errors, and that's why there's an error bar for them.

Given that we're talking about samples and surveys, the numbers simply will wander around a little. And given that we've two different methods being used here, they'll wander differently and independently. Which is I think what's happening here.

The ADP number was low for November, the BLS high. I think the ADP number is high this month and that the BLS will be lower.

What we would like to know is what's the BLS number going to be and informed comment has it at around 160,000. That is, everyone is expecting some smoothing out of the previous differences in this reading of the runes.

My political views are that the government can never get enough information to effectively manage the economy in detail. Yes, I know, we're about investment here not politics. But that same insistence means that I'm not in the least surprised about some economic statistics going walkabout occasionally - it's rather my point.

The current high in the ADP employment numbers is at least partly a reaction to the surprise low a month ago. Internal to the numbers variation working itself out. I expect the BLS numbers to come down a bit from last month to meet it too.

The employment number is important because a surprise either way will move the market. The current thinking is that the BLS numbers will be around the 160,000 mark, and if so, that'll just be a confirmation of what's already there in prices.

As far as the larger information about the macroeconomy is concerned, it's that the slowdown of last summer does seem to have passed. It could be the Fed rate lowering that did it, could be that they were correct that it was all transient issues anyway. The US economy is now growing at around trend - 2% GDP growth or so - and I see no reason why that won't continue.

A reasonable expectation is that there's not much more hidden unemployment out there and that, over the next year or so, the rise in employment will slow down, and real wages will rise instead. That would mark the final maturing of this expansion.