The company also acquired Care.com, marking its entrance into the private care business.

We believe New IAC is undervalued, but we think investors should wait for the spinoff to be completed before buying, in order to avoid being exposed to Match price fluctuations.

Well, it finally happened. On December 19, IAC (IAC) finally filed to spin off most of its Match Group (MTCH) stake in Q2 2020. The move was welcome by the market, pushing the stock to the high $250s, but we believe it still undervalues the company substantially, especially the New IAC portion. We believe there could be substantial value unlocked in New IAC, but we believe IAC shares are better purchased after the spinoff is complete to minimize exposure to Match, which we believe is richly valued at current prices.

In the transaction, IAC would spin off 2.35 shares of Match per share, as well as all $1.7 billion in debt. It would receive $0.7 billion, or around $3 per share, of cash from Match. The spinoff is expected to be completed in Q2 2020. 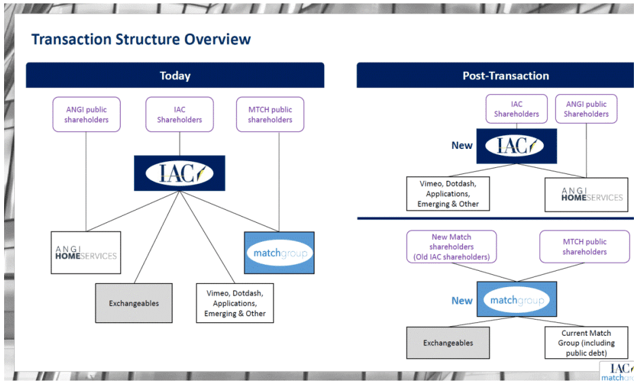 After the transaction, IAC should be left with its 84% stake in ANGI Homeservices (ANGI), as well as a collection of other platform companies. These are divided into multiple segments: Dotdash, Vimeo, emerging and other, and applications. It also has an investment arm with investments in more platforms, including a $250 million minority investment in Turo, a car-sharing company, and more recently, a $500 million acquisition of Care.com (CRCM), a healthcare platform that matches families with caregivers.

We believe New IAC would be the better investment after the spinoff. It should show faster growth than Match, as it would have a collection of immature but fast-growing platforms that are leaders in their categories. New IAC would also be very cash-rich, with $2.9 billion in cash and no debt.

Our confidence in New IAC increased after a recent report showed that IAC's mobile division, which owns apps that provide solutions to problems like robocalling, could make up to $200 million in revenue this year from 4 million paying users, around 2/3rds of the number of Tinder paying users. The fact that IAC can create multiple successful apps shows that the company will likely be able to create more shareholder value in the future.

For those interested in buying IAC, we believe it should be bought after the spinoff. Buying IAC now will expose investors to Match, which we believe is richly valued at the moment, with a forward P/E of around 43x despite being a fairly mature platform company.

We also believe that there will likely be strong selling pressure on Match after the spinoff due to its recent run-up and the fact that Match is very different from many of IAC’s current platform subsidiaries. Match has already become a fairly mature platform, while IAC still has a collection of early-stage platforms, so we believe most IAC shareholders would not want to be Match shareholders. In fact, IAC itself believes it may sell up to $1.5 billion in equity instead of distributing it to shareholders, and we believe this could be because the company believes its own business is a more attractive investment than Match at the moment.

Recently, IAC also announced the acquisition of Care.com for $500 million. Care.com, a player in the $335 billion care market, offers a platform that makes it easier for families to find and manage quality caregivers and for caregivers to find satisfying jobs and manage their careers. 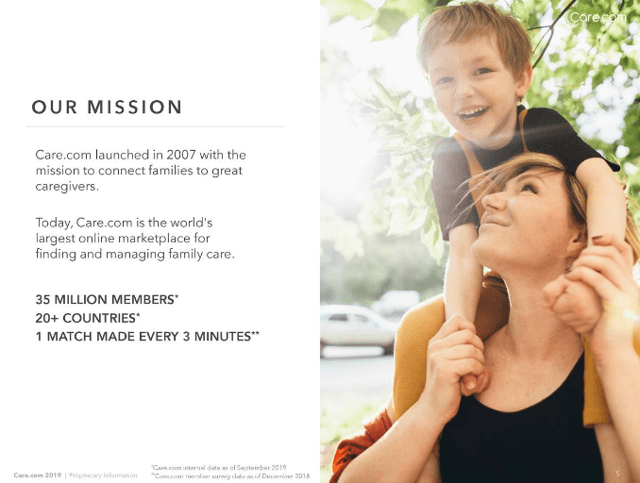 The acquisition, while small for a company like IAC, does make sense in many ways. IAC can probably reduce filing and other expenses significantly, and possibly help boost growth by investing more money in the company. The company did have a lot of cash before the acquisition, but it was being quite prudent with its cash. The Care.com acquisition should allow it to supercharge its growth and increase both the supply and demand side of its platform substantially. 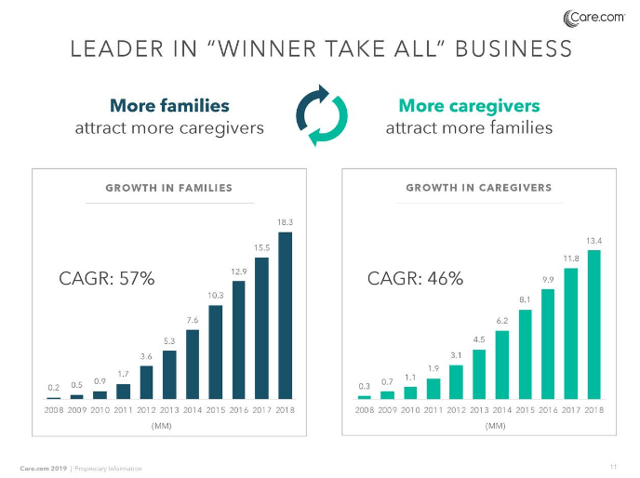 With the new debt from IAC and the cash payment, Match's value should decline by around $2.4 billion from its current valuation to around $21.5 billion. As we mentioned earlier, we believe Match is richly valued due to its high forward P/E ratio and its slowing growth - YOY growth YTD is only around 20%.

We have valued IAC before, calculating that the Dotdash, Vimeo, Applications, and Emerging and Other segments were worth $4 billion in total, and we continue to believe that the valuations still stand. Adding the ANGI stake, the $2.9 billion in cash, and the investments in Turo and Care.com, New IAC would be worth around $11.5 billion. However, the implied value of New IAC is currently $5 billion, so there is definitely substantial value that can be unlocked after the spinoff.

While we personally would wait for the spinoff to end before buying New IAC shares, another alternative is to hedge against a Match decline by selling short Match in a 2.35:1 ratio against IAC shares.

Overall, we are optimistic about IAC, especially regarding the portion that will remain after the Match spinoff. This portion has a variety of high-quality platforms in their early stages, which we believe could each potentially be worth billions over the long run. After all, Match itself came from IAC's own experimental division.

Follow WY Capital and get email alerts
+
Add a comment
Disagree with this article? Submit your own.
To report a factual error in this article, click here.
Your feedback matters to us!