The argument for energy-related companies as an important part of any portfolio is based in part on valuation and in part on economic significance.

The history of Personal Consumption Expenditure vs. Energy PCE is a history of technological improvement in energy consumption.

Every investor should be over-weight energy and related industrials in my opinion. I believe we are due for a positive turn.

The argument for energy-related companies as an important part of any portfolio is based in part on valuation and in part on economic significance.

Higher energy prices certainly drive cash flows, drilling activity and investment, but nothing is simple when the mix of energy price factors includes currency shifts, geopolitics, dynamic technological advances and swings in investor psychology dependent on perceived economic issues which may never materialize. The current political climate to eliminate all energy generation from fossil fuels is an argument with little scientific comprehension of the historic importance and realities of human society. I think we will see higher prices overall simply because investors are overwhelmingly negative on energy-related issues, which include many well-managed infrastructure companies. E&P companies represent only 4% of the market cap of the S&P 500, a 30-yr low (see Rejected chart), but remain as vital as ever to current economic growth; I expect to see improvement.

The history of Personal Consumption Expenditure (PCE) vs. Energy PCE is a history of technological improvement in energy consumption. 1959 Energy PCE represented ~7.25% of PCE. This has gradually declined to ~4% today as technology improvements improved efficiencies. For example, automobile fuel efficiencies once in single digits in the 1950s now average in the low-30s MPG. This has been accompanied by many more standard 'bells and whistles' such as air conditioning, lighting, entertainment systems, navigation and crash avoidance and etc., each of which has added value while consuming less energy.

Today's 4% of the S&P 500 and 4% of PCE, is comparable to the 1990 period of lower $WTI when the energy sector represented 12% of the S&P 500 and 5.7% of Energy PCE. Supply/demand plays little role when market psychology has such a wide swing in pricing. Many continue to believe that supply/demand controls price when the data makes it clear that production follows consumption and that consumption has been trending at 1.74% for ~10yrs with a very minor variation of 0.013%. 0.013% is not very much variability and certainly not enough to justify the $WTI swing over $100/BBL with the "Peak Oil" mentality of the 2010-2014 period only to plummet to less than $30/BBL in 2016 with the "Oil Glut" mentality.

That energy-related issues sit at 30-yr lows reflects a level of pessimism of the importance of oil/gas to the global economy which has never been seen in my 40 yrs as an investor. Experience teaches that this condition cannot be sustained for much longer with economic reports continuing to be better than expected. Energy contrary to consensus remains vital to economic growth.

Every investor should be over-weight energy and related industrials in my opinion. I believe we are due for a positive turn. 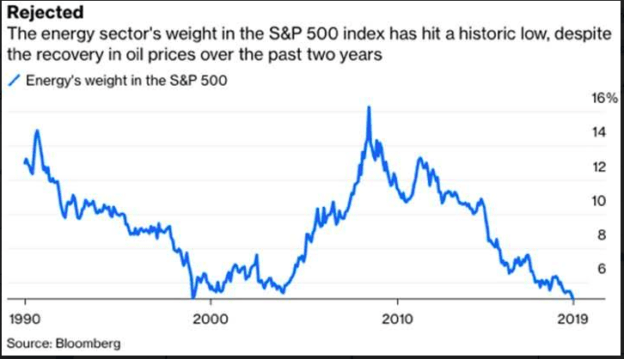 Follow Todd Sullivan and get email alerts
+
Add a comment
Disagree with this article? Submit your own.
To report a factual error in this article, click here.
Your feedback matters to us!