Morien Resources Corp. (OTC:APMCF) is a $24m CAD market cap company which has two substantial royalty claims, one on the developing Donkin coal mine in Nova Scotia and a second on the Black Point aggregate project. I have profiled the company numerous times, most recently here while Sultan Ameerali updated it a year ago. The key thesis continues to be the ramp up of operations at the Donkin mine by the mine’s owner/operator, Kameron Collieries.

The Donkin mine is currently permitted to reach production levels of 3.6m tonnes of coal per year, yielding about 3.0m tonnes of saleable coal but there have been several challenges in getting the mine up and running. After taking the time to de-water and prepare the site, operations have continued to improve iteratively including:

The Donkin resource lies below the Atlantic ocean, like many in the Cape Breton area of Nova Scotia. The coal seams are flat and have a very simple geology which makes the actual mining of the resource quite easy. Kameron has spent more time developing the resource as there was not a lot of drilling done which involved building out the underground infrastructure to prepare for increased production levels. The mine has improved from handling 40 feet of coal per shift to 100 feet per shift during the course of the development phase; with the current operation the goal is to reach 200 feet of coal per shift which annualized would lead to a production rate of 1.6m tonnes per annum.

The PEV is also taking steps to increase the capacity of the port with steps already taken towards realizing this goal: 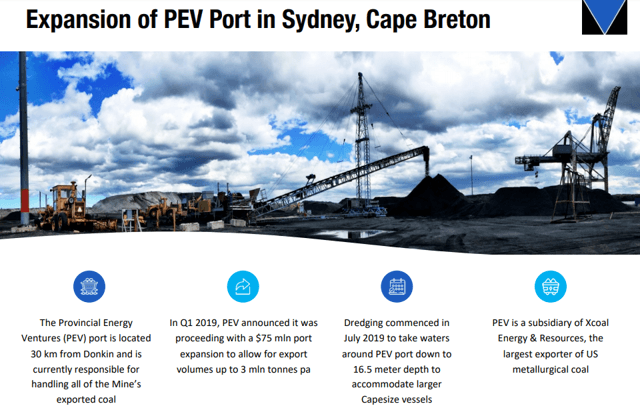 Donkin's 500 tonne/hour wash plant produces a single end product that can be marketed to both the thermal & metallurgical coal markets. Thermal coal is currently trading at roughly $70 USD per tonne per the chart below, though Donkin's met coal is trading at closer to $135 USD/tonne 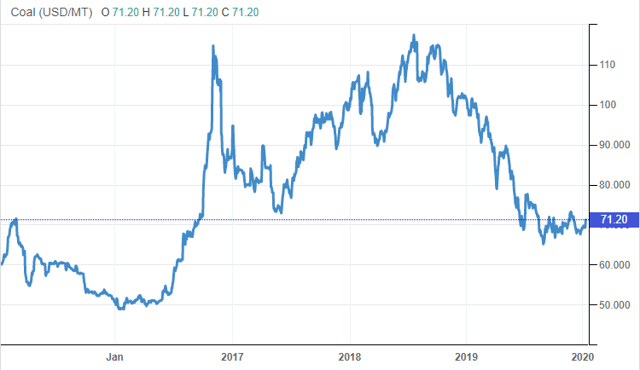 The company is also receiving small royalty payments totalling $100,000 annually (increasing to $111,000 in 2020) from Vulcan for keeping the option on the Black Point quarry project.

The company has worked to bring down its G&A costs over the last several years as well: 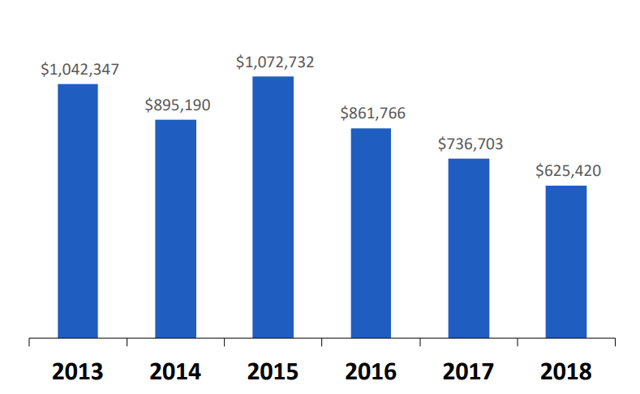 This is a good sign that management is working to conserve its resources. The company was also able to sell a non-core landholding in Georgia, USA, netting $935k for the company. Morien has traditionally returned capital to shareholders via a quarterly $.0025 dividend or through share buybacks. Morien has reduced its share count by 19% since 2015. The company has included a dividend calculator on its site and management has continued to accumulate shares in the company, now holding 16% of the company, aligning themselves well with current shareholders. Morien currently has $3.3m CAD of cash on its books as of September 30, 2019, leaving it with an Enterprise value of just $20.7m CAD.

If we utilize the company’s dividend calculator and implement the assumptions from above and assume an 80% payout ratio along with the incremental gains during the development phase, we can see it is possible the company can almost double its dividend as soon as 2020: 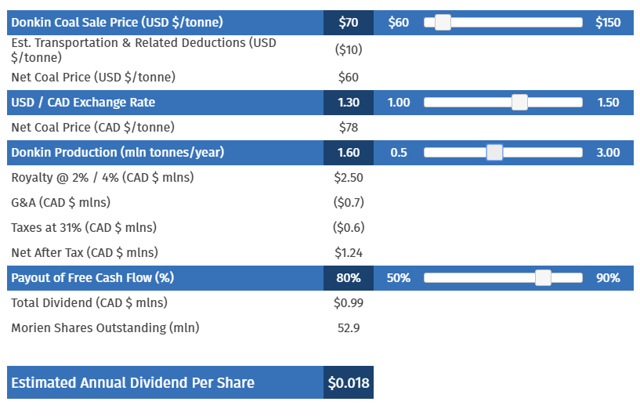 The company has a key near-term catalyst. During the development phase, mining is done at a slower pace as the infrastructure is developed. During the retreat mining phase, productivity increases. Longwall mining greatly increases the yield from a coal mine at a substantially lower operating cost. This video gives a good view of how the process works while this one gives a good example of the type of equipment available and why it is both safer and more effective for increasing yield than continuous/retreat style mining.

The Cline Group is intending to decide on whether to go forward with an investment in longwall mining for Kameron in the early part of 2020, according to Morien management. The death of Chris Cline led to the Cline Group being operated as a more traditional business rather than Mr. Cline as a sole decision maker which has understandably led to a longer time for decisions to be made. Morien management indicated they expect to see a decision made on an investment in the machinery needed for longwall mining early in 2020. This would take at least 10 months to build and install, likely occurring while Kameron continues to develop the underground infrastructure to support it. Morien would not see the benefits of this production decision until 2021. The machinery is not cheap for Cline to purchase (in the range of $100m) but is consistent with how Cline has operated; if they decide against it they will use the continuous miners already in place.

These benefits are quite substantial. A longwall operation would be big enough to get to the current maximum permitted production rate of 3.0m saleable tonnes annually. Management indicated the longwall operation could boost production above 5m tonnes annually, similar to other longwall operations. At $70/t coal, this would take the free cash flow after expenses into the $7.5-$8.0m CAD per year based on management’s projections; at $125 CAD/t coal, this jumps to $12-14m CAD per year. Morien's current EV of $20.3m CAD gives investors a very cheap option on this upside.

Morien has required a lot of patience as investors have waited for Donkin to spool up to the 3m+ saleable tonne level that would give them the cash flow payoff.

I had assumed that at some point Cline, who already own 11% of the company, would acquire the company to avoid the royalty payments. This still may be in play if the company makes the longwall decision, but they may be more focused on ramping production at that point. Morien has been gathering financial leverage for a takeover by buying its shares back at the same time management has increased its stake in the company. Even without a positive longwall decision, Morien’s return at the reduced production level will give some buffer for the current share price. A positive decision on the longwall production by Cline would be a strong catalyst for Morien in near term.

Dan Stringer
3.13K Followers
I am interested in small capitalized companies with a high optionality to the upside compared to the relative downside risk. I am grounded in a value based approach but will also explore special and short situations. I am a trained CPA and continue to practice in industry.Warning: my twitter account is very random but will have a lot of economic and business items sprinkled with Green Bay Packer comments.
Follow

Disclosure: I am/we are long APMCF. I wrote this article myself, and it expresses my own opinions. I am not receiving compensation for it (other than from Seeking Alpha). I have no business relationship with any company whose stock is mentioned in this article.

Additional disclosure: I am long through the MOX.V ticker on the TSX Venture exchange.