Nearby gold futures on the COMEX division of the CME closed at $1523.10 per ounce on December 31. The yellow metal was 3.92% higher in the fourth quarter and moved 18.87% to the upside in 2019. In June, when the US Fed told markets that short-term interest rates would decline by the end of the year and the balance sheet normalization program would end, gold broke out on the upside. The price rose above the post-Brexit 2016 high at $1377.50 per ounce. By early September, the yellow metal reached a high of $1559.80, the highest price since 2013. Gold spent the rest of the year correcting and consolidating, but the price never traded below $1446.20 per ounce.

In my last piece on Seeking Alpha on January 5, I suggested that a new high was on the horizon and that the Velocity Shares 3X Long Gold ETN product (UGLD) would magnify the price action in the gold futures arena. With the recent move, shifting profits on UGLD to the VanEck Vectors Junior Gold Miners ETF product (NYSEARCA:GDXJ) will maintain a leveraged position on the yellow metal as junior gold mining stocks tend to outperform gold on the upside. However, shifting from UGLD to GDXJ will remove the risk of time decay inherent in a triple-geared instrument.

At the very beginning of 2020, the tensions in the Middle East between the United States and Iran went from bad to worse. A US drone attack near the Baghdad airport killed the leader of Iran's revolutionary guard. General Soleimani was number two in Iran, second only to the Ayatollah. Iran promised to avenge the killing, putting the Middle East on the edge of war.

Gold rallied to a new high above the first level of technical resistance at the September peak of $1559.80 in the aftermath of the attack. Gold settled on December 31, 2019, at $1523.10 per ounce. After recovering from a low of $1446.20 in November. In 2020, the yellow metal responded to the increased tensions in the world's most turbulent political region by making a new and higher high. After the new peak, the price retreated in the aftermath of a retaliatory strike by Iran that did not kill any Americans.

The weekly chart highlights the move to a new peak of $1613.30 on January 8. On January 3, the total number of open long and short positions in the COMEX gold futures market reached another new record high of 797,110 contracts. On January 9, the metric remained above the 785,000 level. Before October 2019, the open interest metric never was above 656,000 contracts. Rising open interest and increasing price is typically a technical validation of a bullish trend in a futures market.

Meanwhile, both price momentum and relative strength indicators turned higher in below neutral territory in December and rose with the price of gold. Weekly historical volatility at just below 13% is at the highest level since 2017. The weekly chart remained bullish at the end of last week, despite the correction that followed the de-escalation of the tensions in the Middle East. February gold futures were around the $1560 level at the end of last week. The longer-term charts suggest that gold could be heading for record levels in US dollar terms.

The rise above technical resistance in COMEX gold futures was a significant event in 2019. However, it was gold's ascent in other currencies that was spectacular. Gold rose in US dollar and Swiss franc terms last year. In euros, pounds, yen, Australian and Canadian dollars, yuan, rubles, and a host of other currencies around the globe, the price of the yellow metal rose to a new all-time peak.

The rally in gold across all foreign exchange instruments is perhaps the most bullish technical indicator for the gold market. The bull market that began in the early 2000s is now experiencing another leg to the upside that looks like it will carry gold in US dollars and Swiss francs to new record highs. Accommodative monetary policy from central banks around the world continues to devalue foreign exchange instruments versus gold, the oldest currency in the world.

Price momentum and relative strength indicators are rising towards overbought conditions, but they remained in overbought territory from 2004 through 2011. Open interest at a record high as the price rises is another validation of the long-term bullish trend. Meanwhile, quarterly historical volatility at 9.48% is at its lowest level since 2011, when the price reached its all-time peak at $1920.70 per ounce.

Gold put in another technical target on the upside at the beginning of January at $1613.30 per ounce on the continuous futures contract on COMEX.

On the downside, the November 2019 low of $1446.20 is the first level of technical support below $1500. However, since gold broke out in June from $1377.50 per ounce, that resistance level became critical technical support for the gold futures market.

Last week, I suggested that a new high was on the horizon in gold and that the Velocity Shares 3X Long Gold ETN product would magnify the price action in the gold futures arena. This week, it made sense to take profits on UGLD. The triple leveraged ETN moved from $140.76 on December 31 to $157.95 on January 8, or over 12.2% higher. On rallies, rolling profits into another product that provides leverage without time decay in the gold market is a way to reduce risk and retain long exposure to the yellow metal.

Gold mining stocks tend to outperform the price of the yellow metal on the upside and underperform on the downside. Junior gold mining shares tend to offer even more price volatility. The junior miners explore for gold and produce at higher output costs, which increases the gearing on the shares. Rather than selecting one or more specific junior miners, the VanEck Vectors Junior Gold Miners ETF product holds a portfolio of the top junior mines, which diversifies idiosyncratic risks. The most recent top holdings of GDXJ include: 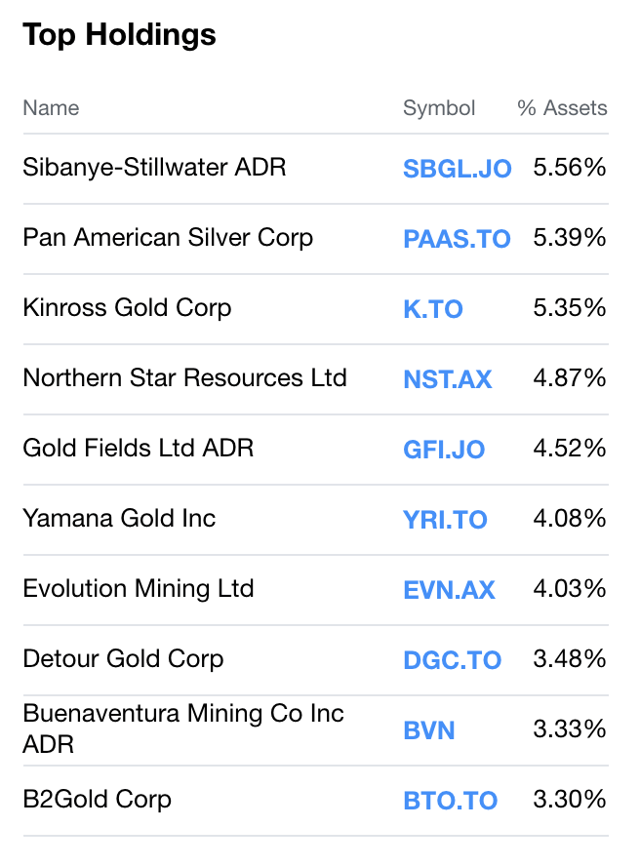 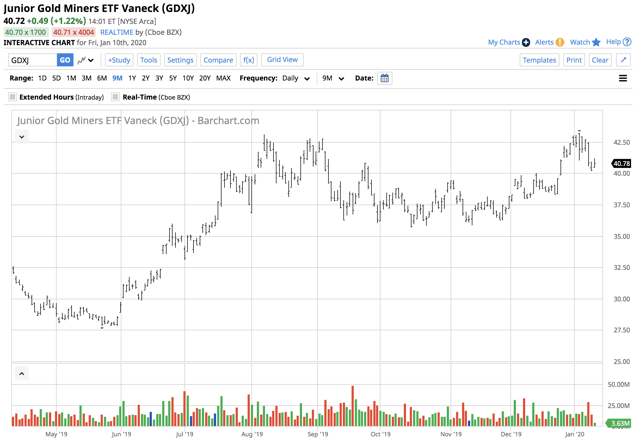 Over the same period, GDXJ appreciated from $35.83 to $43.23 per share or 20.7%, just under double the percentage gain in the gold futures market. GDXJ could underperform gold on a percentage basis during corrective periods, but it will not suffer from the time decay that plagues triple leveraged products like UGLD.

Gold did not take long to reach a new high in 2020, and the prospects for boiling tensions in the Middle East remain at the highest level in decades. I continue to believe that the next leg in gold's bull market that began in the early years of this century will take the yellow metal to new record levels in dollar terms and over $2000 per ounce.

Andrew Hecht
27.83K Followers
Author of Hecht Commodity Report
Weekly commodities commentary and calls, from a Wall Street veteran
Andy Hecht is a sought-after commodity and futures trader, an options expert and analyst. He is the #2 ranked author on Seeking Alpha in both the commodities and precious metals categories. He is also the author of the weekly Hecht Commodity Report on Marketplace - the most comprehensive, deep-dive commodities report available on Seeking Alpha.


The author is long gold