Explains how the charting system works.

Shows examples of how one would have done using the system.

This article will concentrate on our method of charting stocks that's not technical analysis, but instead is called "Fundamental Charting." The reason we call it Fundamental Charting is because it's run by an algorithm that we created for analyzing stocks. What this algorithm does is perform an analysis of each company’s balance sheet, income statement and cash flow statement, using some unique ratios that we created and generates what we call our final “Main Street” price per share. In utilizing our charts we analyze each company's Main Street performance and then compare it to Wall Street’s opinion of what each company is valued at, as measured by the stock price per share that you see listed every trading day in the markets. We do so by using GAAP (Generally Accepted Accounting Principals) vs. pro-forma that's commonly used by most analysts on Wall Street. In doing so we are thus able to see how each company actually is performing on Main Street.

Through the use of automation, we also are able to analyze entire indices, ETFs and mutual funds, which also gives us the big picture on how overbought or oversold such investments might be at any given time. All we are doing in the end is telling you what Main Street is valuing each company at, similar to how a businessperson would do when valuing a company on Main Street. The Wall Street Price is simply the group opinion of what market participants are valuing each company (or the markets as a whole at).

My idol is Warren Buffett and I have intensely studied his work for more than 30 years, and what I have learned, from all my studies, is that in the end Main Street is what really matters and if you get the numbers right on Main Street, then eventually Wall Street will come around and soon follow as:

"In the short run, the market is a voting machine but in the long run, it is a weighing machine." ~ Benjamin Graham

Thus every day we wake up and create new charts based on our system's Main Street analysis, which comes from our interpretation of what we have learned from studying Warren Buffett and Benjamin Graham. No one can control what happens in the world, in a company's boardroom or know what the stock markets will do, but what you can know is how each company is doing on Main Street by analyzing its financial statements. In bear markets those who do eventually end up shooting fish in a barrel, but toward the end of bull markets, one tends to find few investments and as a result builds up a war chest of cash. This system is not for everyone, but is designed for those who want to know the fundamental value of what one is looking to invest in vs. just following the crowd. After having said all that, here are some Apple (NASDAQ:AAPL) charts for you to view.

The fundamental charts are broken up into three categories:

The first example we will use to explain how our charting system is by using Apple.

The Main Street price did not change all that much in both the Apple charts above but amazingly Apple’s Wall Street price had gone from $227 to $142.19. When it did we wrote an article on Apple at the time and declared it as a “Fire Sale” at $142.19 (see our Apple article here). Anyone following our charting system’s advice then would have more than doubled their money in a year’s time. The reason was that the bargain price at the time (green line) was $169.77 and when the Wall Street price (white line) drops below that line, it usually signals a bargain situation.

The fundamental data used to make the Apple charts above are taken from our datafiles, like the one below for Apple’s stock. For those who are interested in gaining a further understanding of the ratio’s used to create the Main Street Price used in our charts, you can do so by going here. 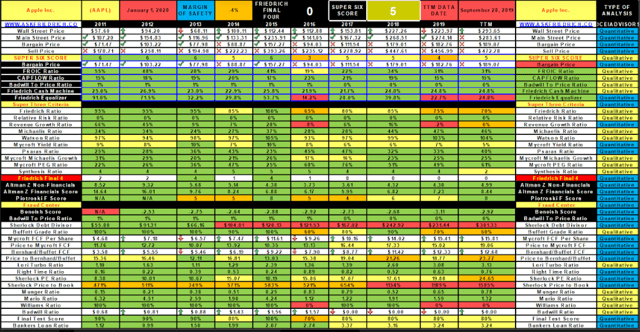 With the Apple example we explained the benefit of buying when a bargain signal is reached. Some companies have consistently traded below their bargain line as they have in our opinion completely been misunderstood by Wall Street analysis. That has allowed us to achieve some wonderful long term gains for our subscribers. One such company is Netflix (NFLX).

Our algorithm currently believes that Netflix is worth $972.40 a share on Main Street and thus its Wall Street price is extremely oversold and has been so for as far back as the eye can see. Using our charting system in 2010 would have allowed an investor the chance to buy the stock for $25.49 then, while its Main Street was three times higher, just like it's today. For those of you who want to view a more detailed analysis that we did on Netflix last year on Seeking Alpha, you can do so by going here.

With fundamental charting you also can short stocks as is demonstrated below with Teva Pharmaceuticals (TEVA).

In 2015 Teva’s Wall Street price hit $65.30, which gave it a sell signal according to our system. But more importantly that was an early warning sign of more problems to come as the following year the company reported negative results for many of our ratios and thus we gave it a $0 Main Street price, which made it a potential short sell at $37.48. Had you followed that signal today your short’s market price would now be $9.09. Whenever a company has negative free cash flow (for example) in its reporting we automatically assign it a $0 Main Street price as a rule.

For those of you who want more details on why Teva became such a train wreck, you can see that in our Datafile below: 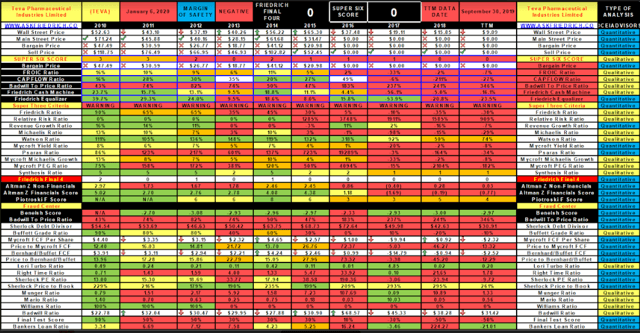 In conclusion, the fundamental charting system can be of great use to any type of investor as each chart gives you a visual snapshot on what's happening on Main Street. This can be of great help to a long-term investor, technical analyst, a short seller or momentum investor. The charting system should be used as a starting point in identifying potential special situations in one’s analysis that should then be followed by one’s own due diligence before buying or selling a stock. We use the charts to quickly analyze any company as the charts give us a quick snapshot of 10 years of Main Street analysis in one chart, for US stocks or five years for global stocks. Time as you know is a terrible thing to waste and that's why we created fundamental charting in order to allow any investor (regardless of their experience in the markets) to view a rather complete fundamental analysis by just quickly viewing a chart.

At Friedrich Global Research, we stick to the numbers. We do analysis like what you saw in this article, but for 20,000 stocks from 36 counties around the world. We also provide model portfolios ranging from ultra conservative to aggressive growth, so you can apply our research to your investing easily.

Disclosure: I am/we are long AAPL, NFLX. I wrote this article myself, and it expresses my own opinions. I am not receiving compensation for it (other than from Seeking Alpha). I have no business relationship with any company whose stock is mentioned in this article.

Additional disclosure: DISCLAIMER: This analysis is not advice to buy or sell this or any stock; it is just pointing out an objective observation of unique patterns that developed from our research. Factual material is obtained from sources believed to be reliable, but the poster is not responsible for any errors or omissions, or for the results of actions taken based on information contained herein. Nothing herein should be construed as an offer to buy or sell securities or to give individual investment advice

Follow Mycroft Friedrich and get email alerts
+
Add a comment
Disagree with this article? Submit your own.
To report a factual error in this article, click here.
Your feedback matters to us!