Natural gas sits around $2.20 per MMBtu.

The longer it sits, the lower it could fall.

The price of nearby February natural gas futures fell from a high of $2.926 on November 5, as the peak season of demand approached. The most recent low came on January 3 at $2.083 per MMBtu, a decline of 28.8% in just under two months. So far, in 2020, the price of the nearby futures contract has not traded above $2.234, the high from last Friday, January 10.

A combination of warm temperatures and high stockpile levels have weighed on the price of the volatile energy commodity. Technical support from a medium-term perspective stands at the August 2019 low of $2.029 per MMBtu. A test of the $2 level is likely on the horizon, given the bearish price action during the peak season.

Meanwhile, the natural gas equities have done a lot better than the price of the energy commodity over the past weeks. The Direxion Daily Natural Gas Related Bull 3X Shares (GASL) rallied sharply from its early December low. Last week, the price reached a level that was double the December low. At the same time, shares of Apache Corporation (APA) exploded higher despite the bearish price action in the commodity it extracts from the crust of the earth.

Natural gas sits around $2.20 per MMBtu

Natural gas remained below the $2.20 level at the end of last week.

The daily chart of February NYMEX natural gas futures highlights that the price had been below $2.20 since December 31 until last Friday. In 2020, the high has been at $2.234 per MMBtu. Price momentum and relative strength remain below neutral readings but turned higher at the end of last week. Daily historical volatility declined from almost 50% in December to below 23.5% on January 10. Meanwhile, the total number of open long and short positions in the natural gas futures market rose from 1,175,753 contracts on November 5 when the price of February futures hit a high of $2.926 to 1,386,202 on January 9. The rise of 210,449 contracts when the price dropped from over $2.90 to just over $2.20 tends to be a validation of a bearish price trend in a futures market.

On Thursday, January 9, the Energy Information Administration reported that withdrawals from natural gas storage around the US were 44 billion cubic feet for the week ending on January 3. 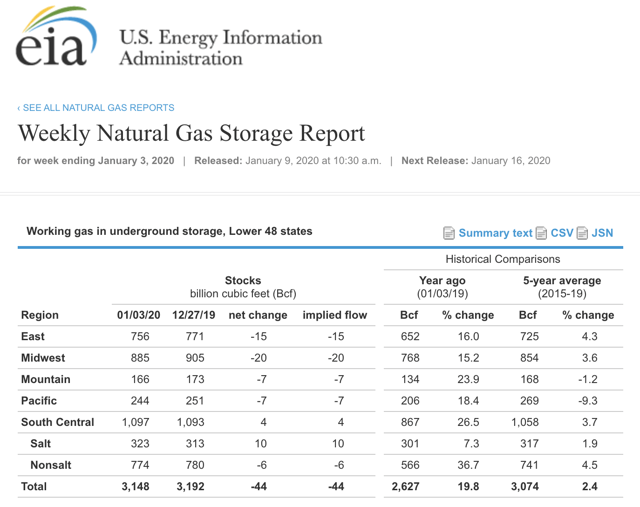 As the chart shows, total inventories stood at 3.148 trillion cubic feet as of January 3. Stockpiles were 19.8% above last year's level and 2.4% above the five-year average for this time of the year. The inventory data was bearish for the price of the energy commodity, but given the price level, it did not move lower in the aftermath of the weekly report from the EIA.

The longer it sits, the lower it could fall

Last year, the end of the withdrawal season was on March 22, when stocks fell to 1.107 tcf. With around eleven weeks to go before natural gas begins to flow back into storage and stocks rise, the average weekly withdrawal would need to be 185.6 bcf to reach last year's low. Since the most substantial withdrawal so far this winter was 161 bcf, and the temperatures have been warmer than average across the US, stocks will go into the injection season at a far higher level this March compared to in 2019.

With stocks weighing on the price of natural gas and the bearish price trend since early November, the prospects for a move below $2 per MMBtu are rising. At the $2.20 level with spring right around the corner, natural gas looks like a bearish sitting duck.

The quarterly chart illustrates that the first level of technical support sits at the lows from August 2019 of $2.029, which is a gateway to the $2 level. Below there, the March 2016 bottom at $1.611 per MMBtu could act as a magnet for the price of the energy commodity. The growing open interest could include trend-following bears looking for a test of the 2016 low. If the price breaks $2, we could see open interest rise as bears look to push the price lower.

While natural gas continues to sit near the lows, the news was different for one oil and gas producing company over the past week. Shares of Apache Corporation exploded higher on the news of a significant oil discovery together with Total SA in Surinam. 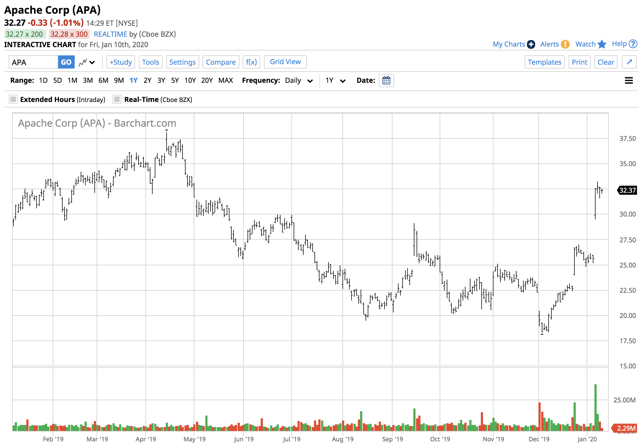 The Direxion Daily Natural Gas Related Bull 3X Shares rose to a new high last week, despite the bearish action in the natural gas futures market. The top holdings of the leveraged product include: 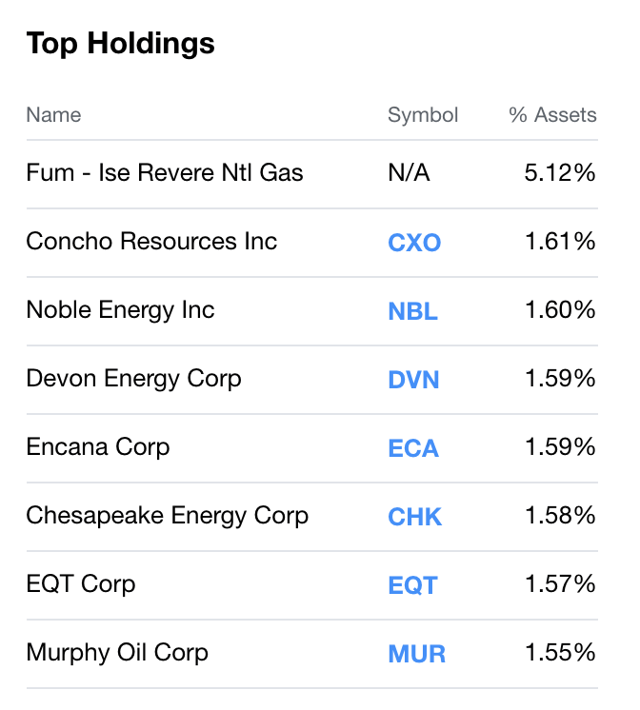 While natural gas moved lower, the leveraged product that holds shares of natural gas producing companies rallied. On December 3, February natural gas futures traded in a range from $2.318 to $2.468 per MMBtu. On January 10, the price of the energy commodity was lower at the $2.212 per MMBtu level. 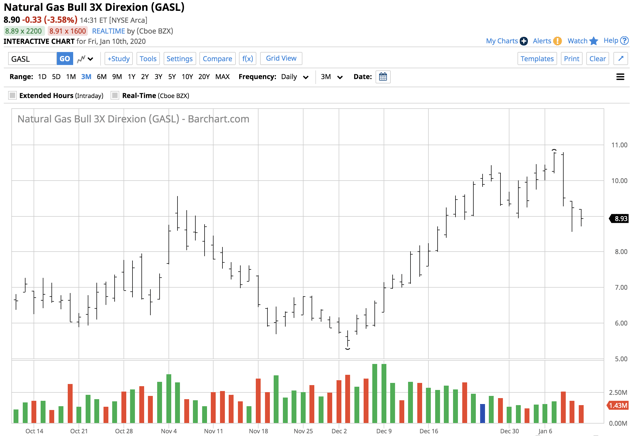 Given the oversold condition in the natural gas futures market, we could see a price recovery. However, stocks and weather conditions across the US remain bearish. Sellers are likely to come out of the woodwork on any price appreciation as winter will end, and the injection season is now only eleven weeks away in the natural gas market.

Follow Andrew Hecht and get email alerts
+
Add a comment
Disagree with this article? Submit your own.
To report a factual error in this article, click here.
Your feedback matters to us!