Regency Centers is one of the best strip-center REITs. They carry a risk rating of 1 to reflect an exceptional balance sheet. We’re bullish and buying shares today.

REG has solid growth in key metrics such as same-store NOI (net operating income) and normalized FFO (funds From operations) per share.

Some investors may shy away from lower yields. Future growth should be strong though. Normalized FFO per share grew by 50% from 2012 to 2018. Dividends only grew by 20%.

Strong growth in normalized FFO per share created a dramatically superior dividend coverage ratio. Despite weakness in the share price, the company continued to deliver earnings growth year after year.

Over the last few months, we witnessed weakness developing in REG’s share price. This weakness created a nice opportunity for buying shares.

Regency Centers (REG) is one of our favorite strip-center REITs and is within our buy range.

We're starting a position in REG by purchasing 39 shares with a weighted average price of $61.355 per share:

That will represent a weight of about .57%.

REG has several traits that we like. They have a solid history of growing FFO per share: 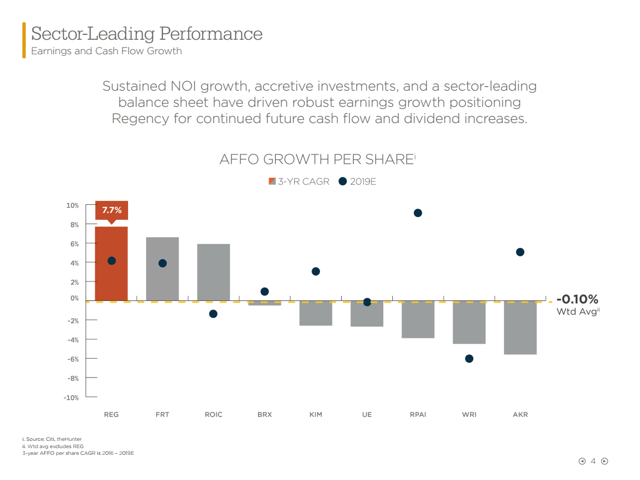 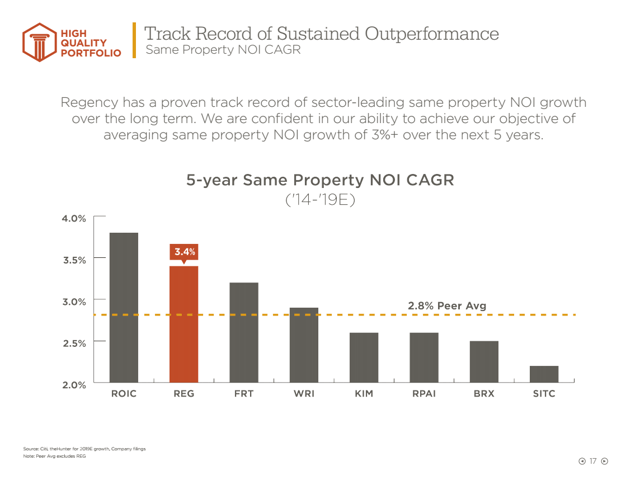 They are large enough to have great economies of scale on employing an excellent management team. They have an excellent balance sheet: 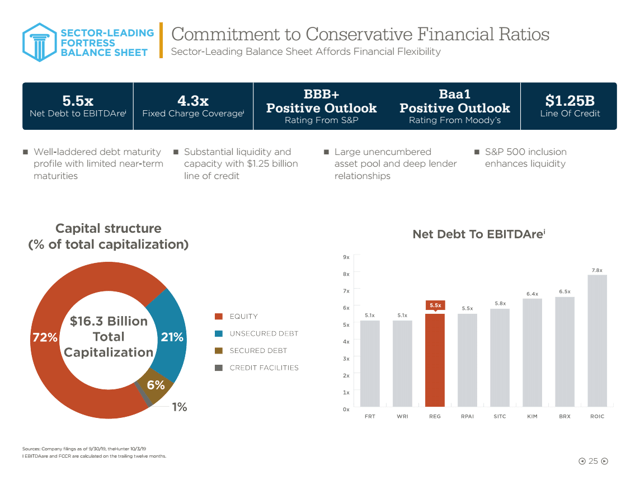 Regency Centers has a BBB+ rating from S&P. REG also has a "Net Debt To EBITDAre" of 5.5x. We like to see companies being frugal when it comes to debt. The strength of the balance sheet and the history of same-property NOI growth both speak to management's emphasis on quality.

This is a portfolio designed for the long term. Some investors will find REG boring because they have a conservative dividend yield of 3.74%. However, they also have a very reasonable payout ratio. A few of my favorite traits for any REIT are a strong balance sheet, a good management team, and a conservative payout ratio. Your dividend is facing far less risk if the company is prudently managing the balance sheet. Dividend cuts happen when REITs are aggressive with their payout ratio and struggle with large debt loads. REG is unlikely to face either challenge at any point in the foreseeable future.

Despite the strong balance sheet and high quality of their portfolio, they trade at a very reasonable FFO multiple.

The reasonable multiple on FFO is quite appealing. Remember that REG has a materially stronger balance sheet than almost any of these peers. The most comparable peers are Federal Realty Trust (FRT) and Weingarten (WRI).

Some investors will assume lower multiples for strip centers simply reflect problems for retail REITs. Don't throw that theory at REG. Their same-property NOI growth laughs in the face of the retail apocalypse. REG continues to sigh high-quality tenants to fill their strip centers. 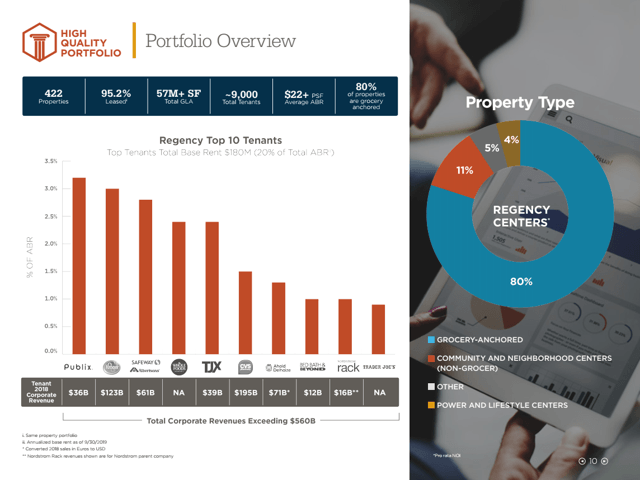 These strip centers were not packed with the over-leveraged, under-shopped garbage retailers that are going bankrupt. REG didn't want that trash in their portfolio. Their leasing team didn't want to infect the portfolio with an overabundance of terrible apparel retailers.

Because REG was proactive in controlling their tenant base, they put themselves in a better position for the future. Their biggest apparel tenant is The TJX Companies (TJX). TJX is one of the few successful companies in the category.

We don't want to abuse the words.

Several strip-center REITs are currently working on redevelopments. The most promising of those redevelopments including apartment buildings on top of retail.

There are few things more appealing in the downtown environment than a nice apartment above a Sprouts (SFM). When the bottom floor is a Sprouts, the tenants don't need to drive to do their grocery shopping. 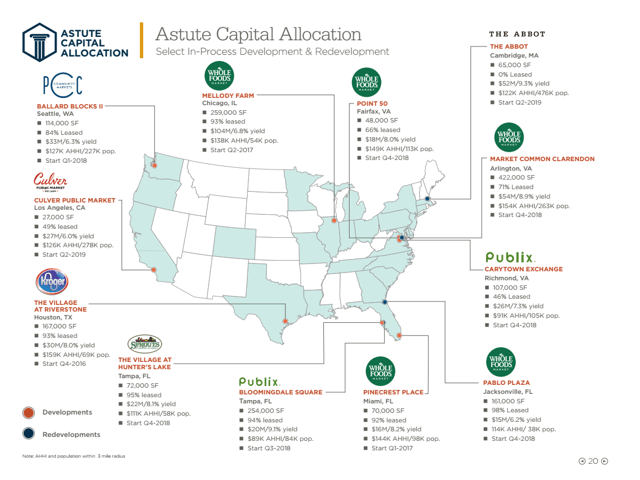 There are a few other grocery stores that also can serve as a great anchor, but Sprouts often comes in the ideal size and offers superior pricing relative to several of their competitors.

One metric we like to use in evaluating the quality of a strip center is the sales per square foot of the grocer anchors. 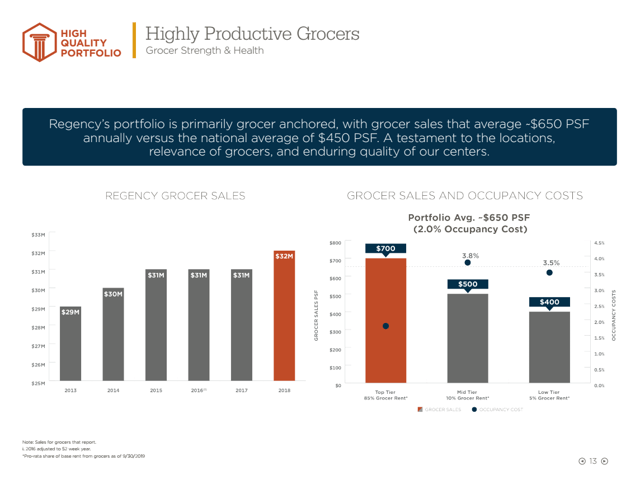 When the grocery anchor has a high volume of sales, they produce more traffic for all of the other retailers in the center. That higher volume of traffic enables smaller retailers to thrive and allows the landlord to charge higher rents for space. Think of it this way: Would you rather be a dry cleaner next to a grocery store with extremely high traffic or next to a J.C. Penney (NYSE:JCP). Clearly, most people would pick the grocer with high sales. If you picked J.C. Penney, you must place a very high value on empty parking spots. The same can be said for many other types of retailers. Even restaurants want to be near an active grocer. The restaurants want you to know where they are. When you see a J.C. Penney, you just stop looking at the parking lot. It's easy to miss the other stores when you are busy laughing and pointing.

REG's dividend yield of 3.8% may feel too low for some investors. However, we expect significant growth over time. The company's dividend payout ratio on normalized FFO per share is less than 60%. The company has been raising their dividend over the last several years, yet they raised the dividend by dramatically less than the growth in their earnings. Consequently, dividend coverage was improving substantially. Investors who only looked at the past growth in dividends would be dramatically underestimating REG's ability to grow.

These growth rates won't be dramatically different forever. The difference in the growth rate simply reflects caution from REG's board of directors. They made the choice to retain a higher portion of cash flow and have much stronger dividend coverage. We prefer picking REITs where the board of directors is very cautious. It works well over the long term because it puts the REIT in a better position for negotiations whenever the market weakens.

Where is the growth?

Looking at a price history chart for REG, investors could very reasonably ask why the REIT doesn't have stronger growth in the share price. The price is down slightly compared to five years ago today: 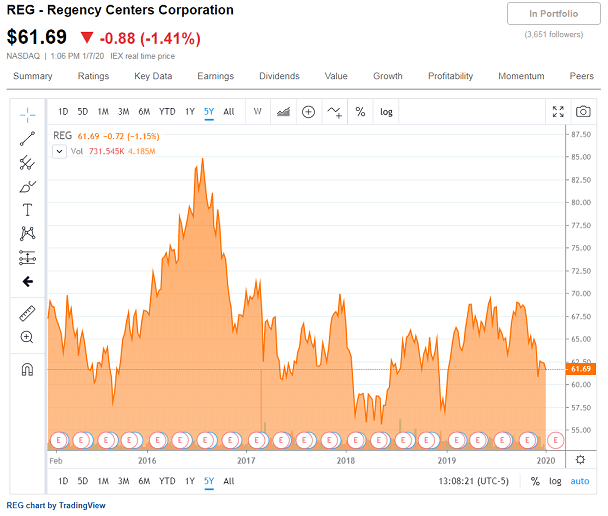 That sure doesn't look impressive. We want to be wary of investing in REITs with a poor history of growth, so we need to look into that.

The metric we are going to use is "Normalized FFO." One of our sources refers to this as "Recurring FFO." For investors who are new to REITs, this is a substitute for "earnings."

How did REG perform on that metric?

The major reason for the difference is adjustments for debt retirement costs incurred during the year. When we strip out those costs, it increases our expected value by about $.07 per share. A line-by-line breakdown in reaching Normalized (Recurring) FFO per share is shown below: 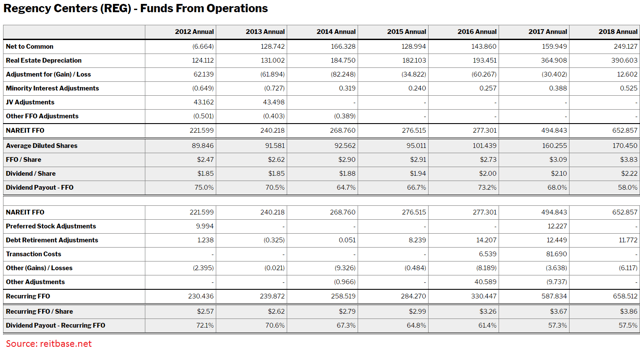 Using REG's last four quarters of dividends (ignoring a potential raise for 2020) would give an annual dividend of $2.34, in addition to the upside in the share price. We're not looking for a gain that large. We don't like to swing for the fences. However, we don't like to pass up strong REITs with solid growth in normalized FFO per share and dividends.

Another tool we like to use for evaluating REITs within a sector is the $100k chart. This tool shows us how much an investor needed to invest on any given day (with dividends reinvested) to reach $100k today. It's exceptionally useful for spotting when one or two REITs have seen a materially different price reaction than other REITs in the same sector. The $100k chart loves REG right now:

We can see that especially in 2019, REG's share price performance has been relatively weak. Since we entered the year with more fear in the market, it isn't surprising to see the strongest (and safest) strip center REITs underperforming. Those are REG and FRT. They generally have the weakest performance so far.

When the market becomes less scared of a recession, we often see a bigger recovery in the more dangerous companies. When the fear returns, those companies often fall harder. Consequently, seeing REG gain less than peers in 2019 is not surprising given that the fear declined. Had we actually entered a recession, we believe REG and FRT would have declined by significantly less than their peers.

However, we also want to emphasize that the weakness in REG is relatively recent. They were either the highest line or roughly tied for the highest line for most of 2019. In our experience, that's a positive sign. A recent dip is more likely to be corrected than an older dip.

The next decade - final thoughts

When we look out over the next decade, we foresee continued solid growth in same-property NOI for REG. The largest factor is the quality of their portfolio. They already have strong anchors at most of their properties and the few weaker properties which remain are targets for redevelopment. Because REG has a strong balance sheet and a low payout ratio, they should have ample cash flow to fund those redevelopment projects. When a REIT has a solid growth rate in same-property NOI, it's common for them to exhibit a reasonable growth rate in FFO per share. We believe that will continue to be the case here. As you've seen, over the last several years, REG has demonstrated strong growth in both categories.

The low level of leverage is providing us additional comfort that REG will be fine even if we enter a recession. We don't spend much time trying to predict when the next recession will occur. Historically, the vast majority of analysts are wrong on predicting recessions. We don't want to spend our time playing that game. Instead, we focus on identifying high-quality REITs with lower risk characteristics. These are the REITs that outperform during the downturns in the economy. Surviving the downturn without being forced to liquidate properties at fire-sale prices is the key to long-term success in real estate investing. We want REITs managed by executives who understand that fundamental truth. That's how we win over the long term. It's not a matter of who gains the most during the bull market. It's a contest to preserve the most during a bear market, so you are in a strong position for the next run.

We use several terms when talking about equity REITs. It helps us communicate if we have the same definitions. Consequently, we put together charts to help investors understand several equity REIT terms:

You'll see Analyst AFFO is near the very bottom of the chart. If we want to start from revenue, it takes quite a while to get there. You don't need to memorize this table, but it could help you as a REIT investor.

Each line provides the formula to reach the value listed on the right. You'll notice that "Normalized FFO" and "Standard AFFO" are the same. This is the value that most management teams report as "AFFO". However, we also have "Analyst AFFO" which adjusts for recurring capitalized expenses.

The next two tables dive deeper into the definitions: 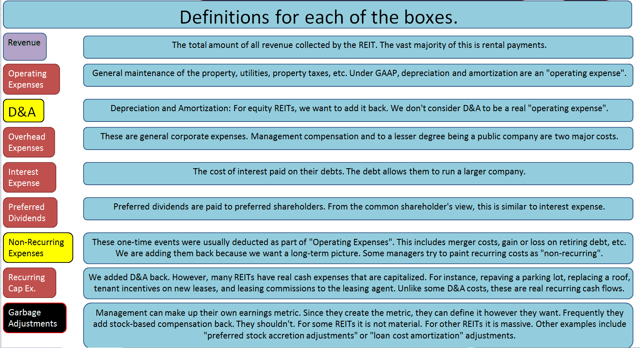 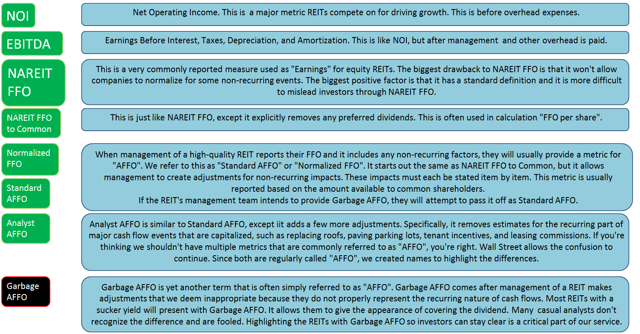 The REIT Forum is the #1 rated service on Seeking Alpha.

Try a Free 2-week trial today. You can use your Seeking Alpha account.

Disclosure: I am/we are long REG, FRT. I wrote this article myself, and it expresses my own opinions. I am not receiving compensation for it (other than from Seeking Alpha). I have no business relationship with any company whose stock is mentioned in this article.

Follow Colorado Wealth Management Fund and get email alerts
+
Add a comment
Disagree with this article? Submit your own.
To report a factual error in this article, click here.
Your feedback matters to us!