Gold has most of the factors needed for an extended bull market.

Its relative strength versus equities needs improving, however.

Look for some additional short-term "correcting" in the gold price.

Gold has quite a few things in its favor as we enter 2020. For one thing, the yellow metal has captured the attention of the investment world after starting the new year with a bang, gaining almost 10% since November and achieving its highest level since 2013. Gold also has in its favor renewed buying interest, thanks to the recent increase in turmoil surrounding the Mideast region. A stronger currency component also bodes well for the metal's intermediate-term (3-6 month) outlook.

Yet one thing is lacking in order for gold to enjoy a truly vibrant and long-lasting bull market. Specifically, there needs to be an increase in gold's relative price strength versus the equity market. Here, I'll make the case that, while gold's intermediate-term outlook remains favorable, until the metal's relative strength factor improves, its gains from here will likely be limited due to competition from risk assets.

With controversy and confusion still swirling around the recent military confrontation between the U.S. and Iran, gold has definitely benefited from the turmoil. Tensions are still running high between both nations, and investors have shown interest in owning gold as a safety hedge against a subsequently uncertain geopolitical outlook. This is clearly reflected in gold's rally to multi-year highs earlier this week, visible in the following graph. 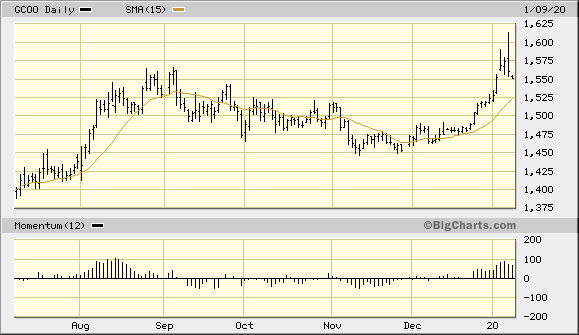 Gold's impressive run since last month was based mainly on three key factors. The first was a rather sizable buildup in short interest in December, which fueled the short-covering rally of the last couple of weeks. The short interest increase and subsequent short-covering can be seen in the following IG client sentiment graph from DailyFX. As the latest headlines involving Iran hit the news wires, gold bears were forced to quickly cover their short positions, which pushed prices higher at a greater rate than would have occurred under "normal" market conditions. 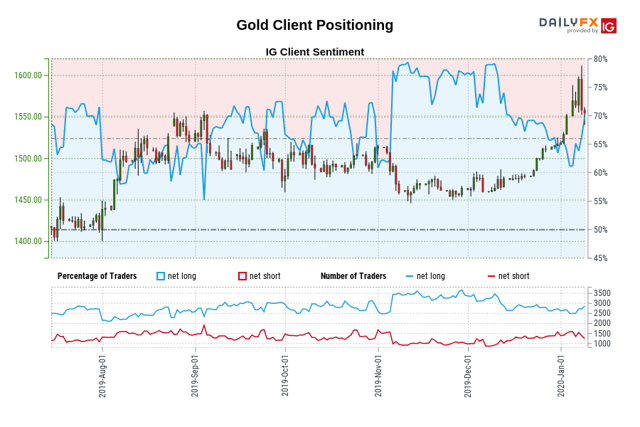 The second factor that allowed the bulls to gain control over gold's intermediate trend was the stunning weakness in the U.S. dollar index over the past three months. This weakness is perhaps best illustrated in the following graph of the Invesco DB U.S. Dollar Index Bullish Fund (UUP), which tracks the dollar and, sometimes, exaggerates the moves in the dollar index. Here, you can see the extent of UUP's decline after remaining persistently strong for most of 2019. Since gold is priced in dollars, the greenback's recent weakness means that the metal's currency component has strengthened and has helped boost the gold price to its recent highs. 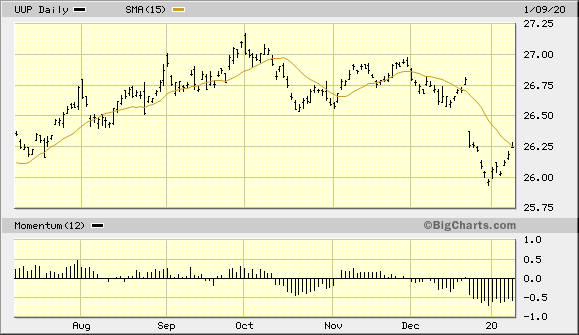 Yet another variable which has benefited gold of late is the revival of the metal's so-called "fear factor." The fear factor is based on the observation that gold historically performs best when investors are inordinately worried about the economic, geopolitical, or financial market outlook. For much of 2019, gold's fear factor was fueled by the U.S.-China trade war. In more recent times, however, the prospect of war with Iran has stimulated safe-haven purchases of the precious metal.

Despite its impressive showing of the past few weeks, however, gold is missing but one last important factor. This particular factor is a prerequisite for a sustained and healthy longer-term bullish trend, and virtually, every major bull market of the last few decades has seen it. I'm referring to the need for gold to conspicuously outperform both the U.S. equity and government bond markets.

When gold is in a relative strength position versus stocks and bonds, it commends itself not only to retail investors, but also to the far more powerful element of institutional investors and commodity fund managers. Without the active participation of this "smart money" crowd, gold's bull markets tend to be of limited duration. Relative price strength is a key consideration for institutional investors, for they tend to make serious commitments to gold only when it's outperforming stocks and bonds. The long-term risk of owning non-yielding commodities like gold typically isn't worthwhile from their perspective unless the commodity is outperforming risk assets.

Right now, gold is still conspicuously underperforming the U.S. equity market as reflected in the following graph. This graph provides a ratio comparison of the continuous contract gold price with the benchmark S&P 500 Index (SPX). Clearly, gold is underperforming the stock market on an intermediate-term basis. This lack of relative strength is one reason why investors should be careful not to over-commit to gold despite its intermediate-term upside potential.

However, when compared to the Treasury market, gold is more than holding its own. As illustrated in the chart below, gold is strongly outperforming the U.S. sovereign bond market as reflected by the iShares 10-20 Year Treasury Bond ETF (TLH). In view of this relative strength, it can be assumed that institutional investors still favor holding gold over Treasuries in their portfolios right now. This is an important consideration, given that gold was underperforming Treasuries during several months of 2019.

Turning our attention to gold's near-term technical outlook, while the yellow metal has remained in the hands of the buyers through the first nine days of January, it's also still somewhat "overbought" on an immediate basis. Consequently, it may need some additional "correcting" and consolidation before resuming a rally. This is the point I made previously, and it still stands in view of the fact that the iShares Gold Trust (IAU), my favorite gold trading vehicle, is over-extended from its 15-day moving average as of Jan. 9. Normally, when this happens, the IAU price line ends up testing the 15-day before the next rally can commence. Traders should therefore be prepared for a temporary pullback in gold and gold ETF prices in the coming days. 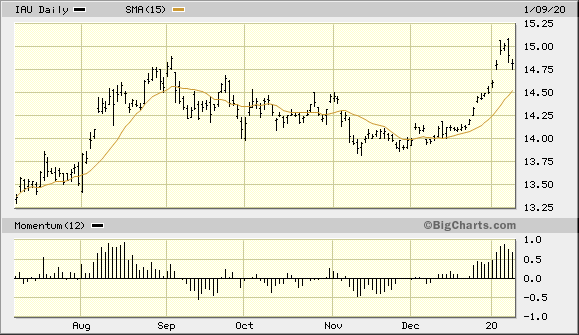 Regarding IAU, as long as the ETF's price line doesn't decisively violate the $14.50 level on a closing basis in the coming days (where the 15-day moving average can be seen in the above chart), its immediate-term upward trend will remain intact, and traders can remain long the gold ETF.

To summarize, while gold likely launched an intermediate-term bull market in December, the long-term upside potential of the metal is largely contingent upon its relative strength versus the U.S. equity and bond markets. Gold has clearly outperformed U.S. Treasuries, yet it's still underperforming stocks from a relative price strength perspective. Therefore, until gold's relative strength rating versus stocks improves, investors should avoid becoming over-owning gold and instead should maintain only a conservative long position in the physical metal as well as gold ETFs.

On a strategic note, I'm currently long the VanEck Vectors Gold Miners ETF (GDX) after its upside breakout in December. I recommend using a level slightly under $28.00 level on an intraday basis as the stop-loss for short-term trading positions in GDX.