Mastercard had an outstanding 2019, increasing almost 58%.

Valuation levels are above historic averages, but not excessive and may even be favorable on a relative basis.

Mastercard (MA) had a very strong 2019, returning almost 58% over the course of the year. The position is a core holding in the Sustainable Growth Portfolio. After such a strong performance, it's very reasonable for investors to question whether Mastercard is in for a period of far more subdued performance going forward. I would suggest that there are several important factors to suggest that is not the case.

Mastercard has put together a string of consistent, double-digit revenue growth quarters over the course of 2019, racking up "mid teens" levels of revenue growth. In the company's most recent quarter, it recorded 16% revenue growth. Even cross-border volumes, which has been an area of weakness in recent years for the business, is showing signs of strength, rising almost 17% year on year. This is significant, because this is a particularly lucrative segment for Mastercard, and a recovery in cross-border volume growth is suggestive of a likely future earnings upswing for the business.

There is especially reason to be optimistic for Mastercard as fears of an imminent recession have largely subsided, which augers well for continued strength in consumer spending globally. An economic downturn would obviously impact both consumer transaction volume as well as dollar value of purchases; however, there are no signs that such a scenario is anywhere on the horizon.

E-commerce shift has years to play out

Mastercard has an inherent secular advantage over cash and check in the e-commerce area, with its ability to settle such transactions through alternative means online. With the share of e-commerce growth in the retail landscape only increasing, and with a progressively greater share of total commerce being transacted online, this is something that will continue to power the business for years to come. There is some evidence to suggest that Mastercard has even been able to pull in a significant portion of the unbanked and underbanked populations, who were largely cash-only consumers, through its innovative prepaid products and the desire of these groups to participate in e-commerce offerings. E-commerce volumes are set to soar globally over the next decade, increasing at double-digit growth, which will continue to benefit Mastercard. 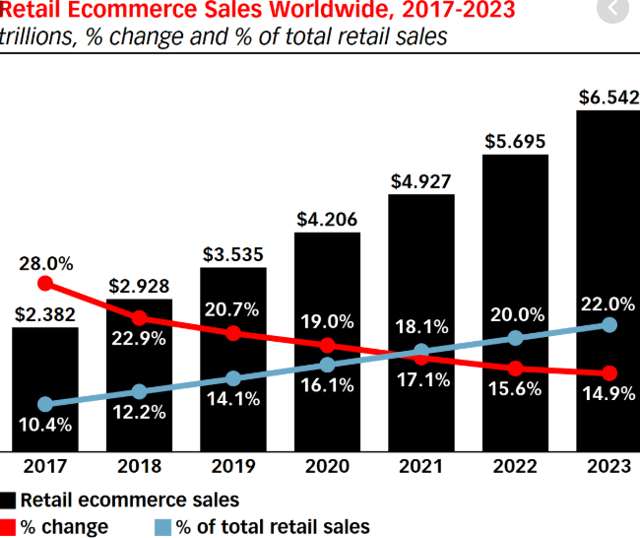 Mastercard had made a very strategic decision very early on to make investments globally for better long-term growth. This makes sense for several reasons, most notably that the steady growth in disposable income and GDP per capita in emerging economies will result in an increase in consumption and purchase volume, much of it likely to be put on cards.

Further, as these economies ride the wave of increasing internet penetration, that will lead to a secular trend away from physical commerce to digital commerce, or away from cash-based purchases to card-based settlement.

This is reflected in Mastercard's payments volume which is skewed 35% to the US and 65% international and has been this way for the better part of a decade. Approximately 30% of Mastercard's business is aligned with the faster-growing markets of Asia Pacific. As Europe and the US enter a slowing period of economic growth, Mastercard likely has the leg up on Visa (NYSE:V) for future growth.

The introduction of smartphone-based payments through the iPhone has been a watershed moment for mobile payment. Apple Pay (AAPL) brought considerable convenience and utility to the idea of paying by phone. The convenience and utility of being able to pay by phone was coupled with easy access to detailed spending habits and spending analytics without the fuss of having to access other accounts. Fortunately for Mastercard, much of the mobile payments innovation thus far has just been alternative payment interfaces leveraging the existing Mastercard rails. Continued innovation in mobile payments is a positive, because this makes it likely that consumers will be more likely to use the mobile payments experience rather than cash or check to pay.

Mastercard is also a key participant in the next round of mobile payments innovation as the payments network behind the Apple Card, which was introduced by Apple in mid 2019. The Apple Card promises innovation in mobile payments via integration of machine learning and Apple Maps to provide a far more comprehensive insight into weekly and monthly spending, detailed transaction history, and intuitive budgeting.

New markets with the potential to triple Mastercard's addressable market

Mastercard has been taking some significant steps to crack the market for fast, direct B2B payments. This represents a massive market opportunity which is almost 3x Mastercard's current personal consumer expenditure payments market, valued at close to $120T. ACH payments, which are the predominant method of B2B payments transfer today, are a slow and lengthy process for business disbursements. Payments can take as long as five days to get credited due to issues in the payments reconciliation process, which is plagued with delays due to inconsistent file formats and transfer authentication, both of which can cause the delays in receipt of funds. Mastercard has built on its acquisition of Vocalink with the $3B acquisition of Nets in August 2019. Nets is an electronic payments platform that allows for payment clearing and instant payment services and will facilitate Mastercard's ambition of being able to introduce additional efficiency and speed into the execution of B2B payments. 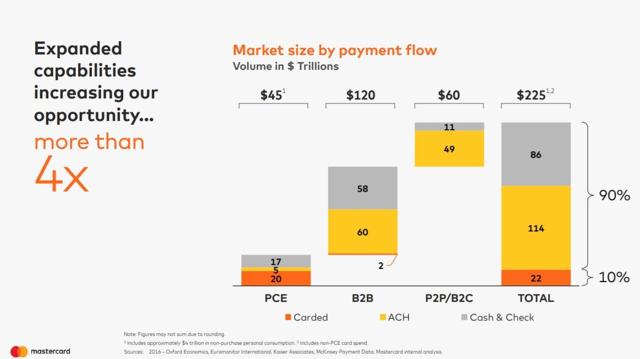 An investment in Mastercard isn't without considerable legal and regulatory risks. Mastercard has been in the cross-hairs of regulators globally for quite some time. The most prominent of these regulations was the passage of the Durbin Amendment in 2010, which capped the interchange allowable on debit cards. More recently, Mastercard and Visa had to settle a massive $6B antitrust suit brought by a merchant consortium, and the business has come under scrutiny by the FTC for discouraging merchants to route debit transactions via alternative networks. Alternative payment mechanisms such as bitcoin (OTC:GBTC) or emerging fintech alternatives are yet to see meaningful traction as a trusted, broadly accepted source of payment, and I don't believe any of the existing alternatives meaningfully threaten Mastercard's position.

Current valuation is reasonable, if not attractive

Mastercard has generally traded at a premium to the S&P 500 from a valuation perspective; however, the business currently trades at a premium to its own historical valuation at close to 33x forward earnings. This needs to be kept in context of a business that has been growing revenues consistently in the mid-teens and has significant entry barriers in place to keep out competitors and significant secular tailwinds and new markets to ensure continued, sustained growth. When relative valuation is considered against such businesses and P&G (PG) and Colgate (CL) which trade at 23-24x forward earnings, with flat to declining revenues, the case for paying up more for Mastercard may be more palatable.

To see other ideas of high quality, growing businesses that are positioned to be long-term wealth creators, please consider a Free Trial of Sustainable Growth.

Disclosure: I am/we are long V, MA. I wrote this article myself, and it expresses my own opinions. I am not receiving compensation for it (other than from Seeking Alpha). I have no business relationship with any company whose stock is mentioned in this article.

Follow Integrator and get email alerts
+
Add a comment
Disagree with this article? Submit your own.
To report a factual error in this article, click here.
Your feedback matters to us!