Regular readers of my work know that I'm forecasting a down year for the market. But merely a decline of 11.9%. That's not so bad, is it?

What happened last week, and what it may mean for the market in 2020.

Is there a pattern here? Probably not. 3 weeks of returns don't matter much, but it does make one wonder whether upward momentum might be decelerating.

Friday's employment report was uninspiring. Of all the charts presented by financial experts to show what's going on in the job market, this is among my favorites. It comes from Bob Dieli at nospinforecast and it shows the year-over-year change in total private nonfarm employment.

The current reading is 1.52%. When this indicator breaks below 1%, it's time to head for the bunker. For now it looks like the trend in monthly gains is lower. Keep an eye on this.

Percent change from year ago month 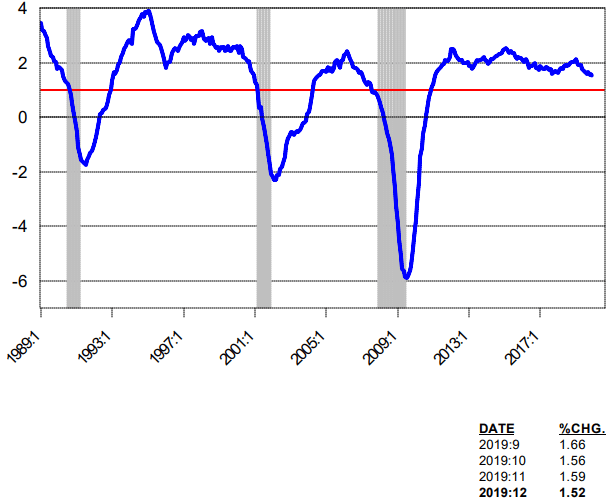 Now that 2019, and the decade of the 2010s are in the books, let's look back at all 12 decades since 1900 and compare their average annual compounded returns (CAGR).

2019 was a great year, but the 2010s were only 4th best out of 12. Still very good, but not record-setting. A couple of things stood out to me when I made this chart. First, after a great decade the market follows with a bad one (or two). The only exception is the back-to-back gains of the 1980s and 1990s. Those were truly the "go-go" years.

Second, I was surprised to see that the returns for the 2000s was only a negative 2.5%. After two severe bear markets, I expected to see a steeper decline in the average. 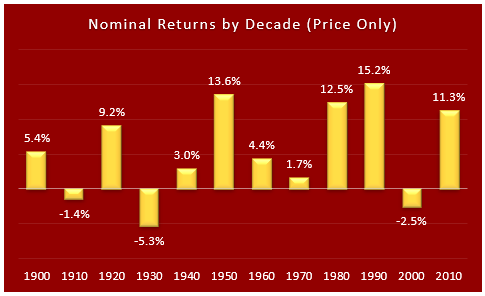 Where will 2020 take us? Regular readers of my work know that I'm forecasting a down year for the market. But merely a decline of 11.9%. That's not so bad, is it? Bulls can ride that out without much trouble, and maybe even do some dip buying along the way.

Follow Erik Conley and get email alerts
+
Add a comment
Disagree with this article? Submit your own.
To report a factual error in this article, click here.
Your feedback matters to us!