Every so often I receive angry messages from blog readers who insist I am wrong to be bearish of stocks and corporate bonds. My first point would be, no one has to read my thoughts. If one is confident in their own investment rules and assessments, they should be content to follow them and make their own management decisions. Sending angry messages to me is a complete waste of time.

Second, I am a fundamental financial analyst, and my partner a technical analyst, and the rule set we adopted when we founded our asset management firm is fundamentally and technically based and drawn from 200 years of historical analysis, and 30 years of live experience as money managers. We don't change our rules when our measurements signal negative investment prospects, and, no, prospects do not get better the more overvalued assets become - quite the opposite.

No approach gets to outperform through every phase of each investment cycle, so thinking people must accept that. We exercise allocation discipline and are not able to buy assets that measure as egregiously overvalued because doing so knowingly is negligent and highly likely to end in financial losses for ourselves and the clients who trust us with their life savings. Again, being angry with us for doing the job we are trained and hired to do, makes no sense.

Facts will be faced one way and another, and reality exists whether we acknowledge it or not. If we have no meaningful investment rules or restrictions, then we are straight-up gamblers, and the house will eventually take our money; believing or hoping otherwise is illogical.

We have all lived through a record asset price expansion cycle since 2009, and that makes return prospects over the next decade much worse not better-accept this truth, or not.

This table of historically relevant valuation metrics for S&P 500 stocks speaks for itself. The first seven ratios average in the rarified 85 to 99th percentile of historical incidents, and the last two register in the lower half and third of historical yields (because prices are so high). 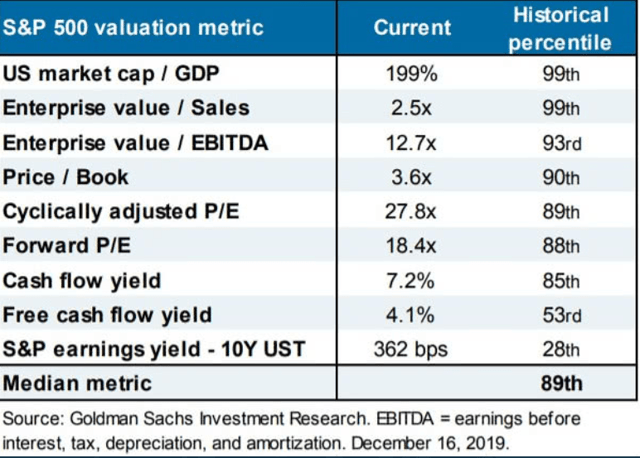 The next chart plots the price to cyclically adjusted backward-looking earnings expansion and contraction cycles in US stocks since 1881. Here, we can see that the current multiple expansion cycle matches 1921 to 1929 and is second only to the 1982 to 2000 expansion. In addition, we can see that every single expansion cycle has been followed by a contraction cycle of similar magnitude, which corrected valuations from above the long-term mean to well below it - hence restoring the long-term mean. It's just the way it works. 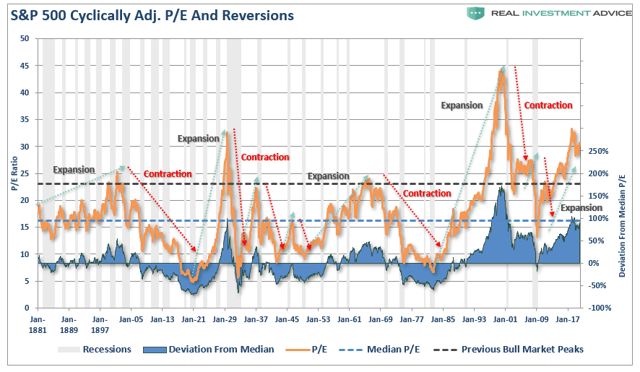 In terms of price to sales, shown here since 1990, we can see that the current expansion (in red) has surpassed the previous all-time bubble peak of 2000, even as it remains below the delirious price to forward estimated earnings top of 2000 (in black), whereafter stocks tanked and spent a decade trying to make back losses. 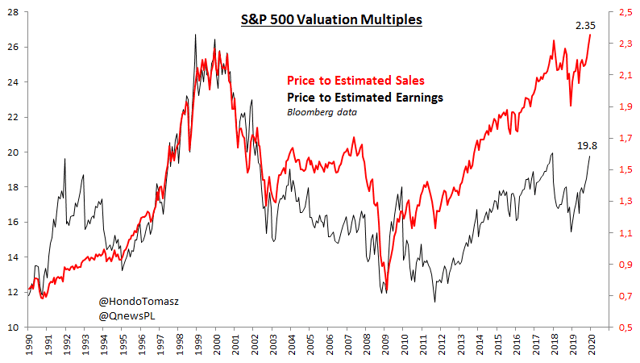 In the final chart below, we can see that the tech-heavy NASDAQ (in blue) has outperformed the S&P (in orange) this cycle by even more than the tech bubble of 1998 to 2000. As Lance Roberts points out today, both markets are now trading more than 3-standard deviations above their 200-week moving averages in one of just four other such extreme and short-lived occurrences of the past 25 years (blue boxes).

Last month, John Hussman offered the following performance summary of the most widely held "blue-chip" stocks following the three most comparable valuation extremes in history. Holding funds, ETFs or managed accounts of them is not defensive.

"The delusion was that these companies were so good that it didn't matter what you paid for them; their inexorable growth would bail you out." - Forbes Magazine, 1977, The Nifty Fifty Revisited

This the reality currently priced into stocks; denial is no antidote. As they say in the casinos, "Know your limit, play within it."

Danielle Park, CFA
4.53K Followers
Portfolio Manager, financial analyst, attorney, finance author, a regular guest on North American media. Danielle Park is the author of the best selling myth-busting book “Juggling Dynamite: An insider’s wisdom on money management, markets and wealth that lasts,” as well as a popular daily financial blog:www.jugglingdynamite.com Danielle worked as an attorney until 1997 when she was recruited to work for an international securities firm. A Chartered Financial Analyst (CFA), she now helps to manage millions for some of Canada's wealthiest families as a Portfolio Manager and analyst at the independent investment counsel firm she co-founded Venable Park Investment Counsel Inc. www.venablepark.com. For two decades, Danielle has been writing, speaking and educating industry professionals and investors on the risks and realities of investment behaviors. A member of the internationally recognized CFA Institute, Toronto Society of Financial Analysts, and the Law Society of Upper Canada. Danielle is also an avid health and fitness buff.
Follow
12 Comments
To ensure this doesn’t happen in the future, please enable Javascript and cookies in your browser.
Is this happening to you frequently? Please report it on our feedback forum.
If you have an ad-blocker enabled you may be blocked from proceeding. Please disable your ad-blocker and refresh.