MLPs extended their winning streak to 5 weeks, but MLPs and midstream stocks were weaker towards the end of the week as oil prices and energy stock prices sank lower.

Natural gas and NGL prices were up on the week, but remain at low absolute levels.

Positive stock movements in the broader equity market was supportive of midstream stocks even in the face of falling oil prices.

MLPs extended their winning streak to 5 weeks, but MLPs and midstream stocks were weaker towards the end of the week as oil prices and energy stock prices sank lower. Natural gas and NGL prices were up on the week, but remain at low absolute levels. Capital markets came out of hibernation with more than $12bn of debt capital markets activity, a $1.6bn preferred issuance and KMI's $764mm (net of tax) exit from Pembina (NYSE:PBA) shares. 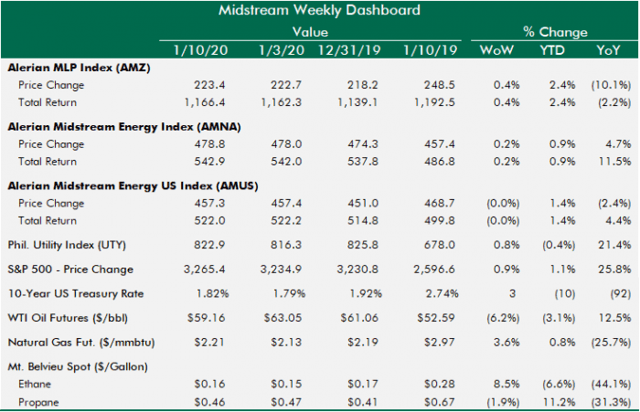 Broad equities rallied through escalation and de-escalation (for now) with Iran, generally glossing over the tragic. Positive stock movements in the broader equity market was supportive of midstream stocks even in the face of falling oil prices.

Earlier this week, I posted a note on infrastructure that you can check out here. Putting that piece together used up my creativity for the week, so I'll sign off here. Have a great week.

MPLX led MLPs this week, and despite having substantial processing assets, was perhaps the beneficiary of rotation away from some of the more volatile upstream-oriented MLPs that traded down this week. The rest of the top 5 was dominated by other liquids-focused MLPs NS, HEP and SHLX. 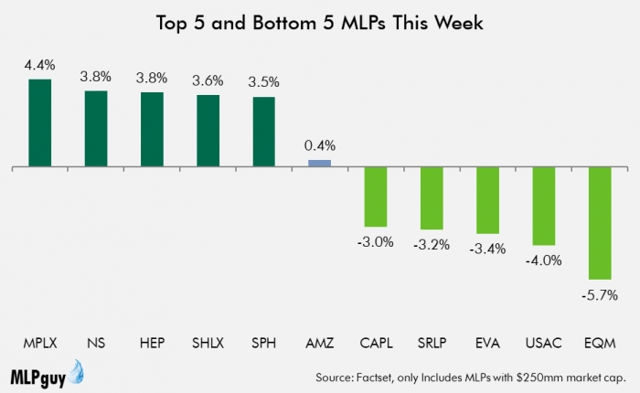 CAPL repeated in the bottom 5. EVA and EQM went from top 5 to bottom 5. On the YTD leaderboard, ET and NRP fell out of the top 5, replaced by SHLX and HEP. Coal names remain the biggest winners so far despite warm weather and generally low natural gas prices. 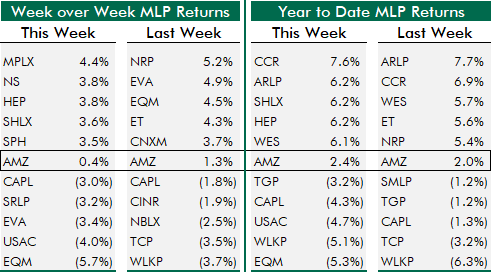 Beyond new addition to the midstream corporation group HESM, which performed best, this week's winners included downstream natural gas-focused names Cheniere (NYSEMKT:LNG) and KMI. Most of last year's big losers AM, ENLC, and ETRN (not OTC:ALTM this week) resumed their declines, not a great signal. 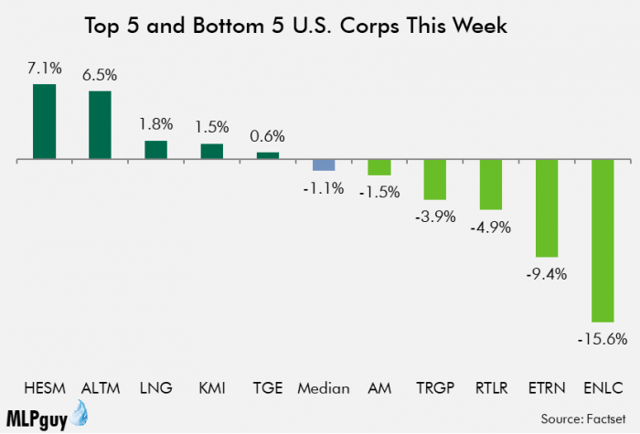 Cheniere has started 2020 strong, after trailing many of its corporate peers last year, and sits near the top of the YTD leaderboard. ENLC's big swoon this week took it from second place last week to dead last. 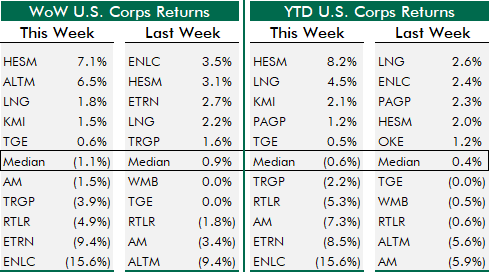 One quick note for this week: I moved HESM to the midstream corporation group, because of its change to corporation for tax purposes. I have included names like TGE, RTLR and ENLC in this group of midstream names, and haven't including the shipping names that remain in the MLP bucket despite being taxed as corporations for the most part. The inclusion of TGE and ENLC in this group originally stemmed from their existence as general partner holding companies, back when we had many of those. But if I were to move TGE and ENLC to the MLP chart, it would leave this midstream corporation group barren with just a few true corporations. So, for now at least, I am sticking with midstream up-C partnerships in the Midstream Corporation charts and the shipping MLPs in the MLP charts. It's all semantics and eventually there may be few enough companies just to do one chart that is agnostic to tax status.

Pembina traded well on the removal of KMI's ownership of shares. Beyond that, not much change in pricing week over week for Canadian stocks. A few names may have been pressured by rotation within the relatively insular Canadian market as funds perhaps flowed from Inter Pipeline (OTCPK:IPPLF), TRP, Keyera (OTC:KEYUF) and into Pembina. 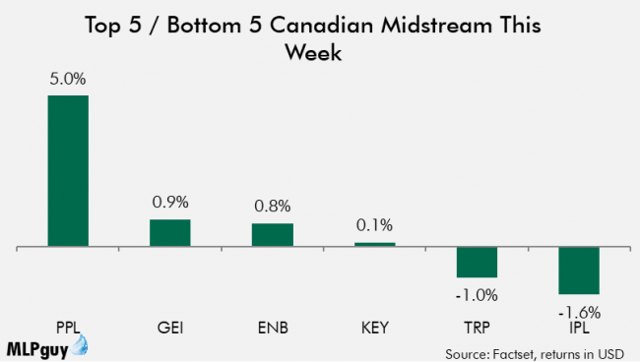 ENB continues to trade well. Pembina's big week jumped it to the top of the YTD leaderboard. It is very early in the year, but there may be some greater divergence of returns in Canadian midstream this year vs. last year when the group moved in lock step higher.

So many debt offerings this week. It was as if the oil price spike over the weekend was the signal for energy stocks to hit the road to get their bond deals done before the window closed. In addition, WES traded well on the announcement of potentially better governance and a new structure separate from its sponsor, who is much less supportive than before the OXY purchase.