We're all familiar with purchasing managers indices and that they come out for various economies for manufacturing and services. What might not be so well known is that a certain amount of sectoral analysis is also done for them. Giving us a view of what is happening at another level of detail.

They're compiled for varied geographies as well. Giving us two different ways of looking at those sectors.

Given what is being recorded there is no one overall number of course so the chart is the best way of viewing the information: 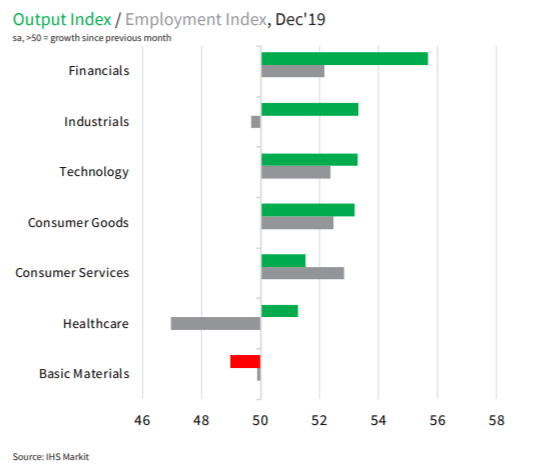 (US sectoral PMI from IHS Markit)

Financials up, basic materials down, well, there're two different ways of looking at this.

One is simply that this is roughly what we would expect. Basic materials are, as their name would imply, inferior goods, financials are luxury ones. No, not luxuries, luxury goods, things we spend more of our income on as our income rises. Increasing lifespans mean we save more for our dotage, richer people insure more things and for more value and so on. And we're all pretty much well supplied with all the paper we need already etc.

All of which is true and we'd expect that sort of effect to be happening gradually as our various societies do get richer. But that's the sort of effect we expect to be working over decades, not something visible in a one month snapshot like this.

So, instead, given the short term nature of these numbers we should assume that we're seeing a change in consumer desire for other reasons across these sectors. The advantage of our PMI measurements being that they are predictive, not historical.

We're seeing much the same message from Europe as well: 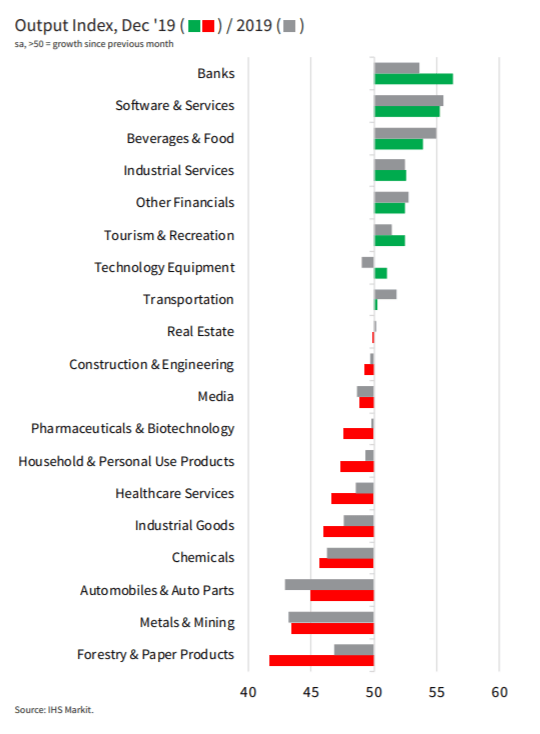 As I say, much the same message. Financials on the up, more basic industrials falling.

A couple of points where they differ though. The US chemicals industry is going through something of a renaissance at present. This is the result of fracking offering cheaper oil (WTI trades at a discount to Brent simply on transport issues) and natural gas prices being substantially lower than elsewhere. So, it's easier to build an ethylene plant and ship the product than it is an LNG plant and ship that.

That fall in the paper industry is also one of the decent explanations for Finland's economic woes. They were/are specialised in both one type of mobile phone (and Nokia lost) and paper. We all use less paper these days and recycle more of it too - not a good time to be a primary woodpulp and paper producer.

There's also an aggregation at the global level: 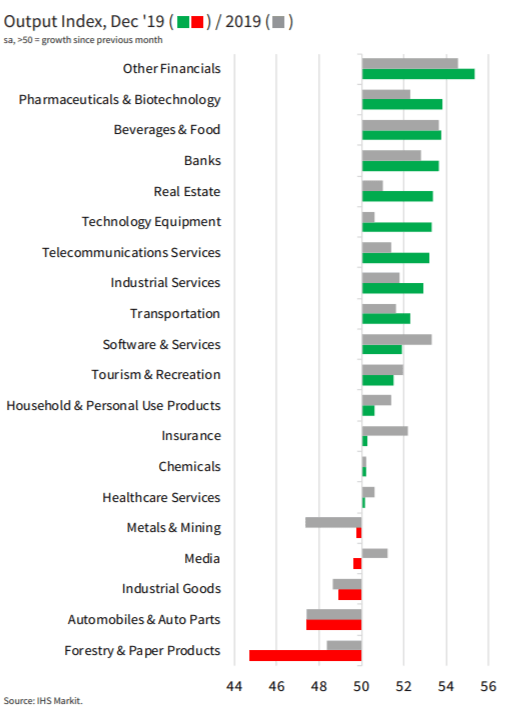 Given that Europe and the US still make up a majority of the global economy it's not to difficult to understand why the aggregated figures resemble the more detailed ones.

The general outline is therefore the same - banks and financials doing well, manufacturing not so much and paper really not happy at all.

Any investment system or decision making process has to use two different filters. Sure, we want to know which specific stock or bond to buy (or short of course) because that's what we need to go out and buy (or short). We can move into ETFs for a sector and all that but we've still got to decide on the specific.

Yet sectoral performance is, with few exceptions, almost always going to be more important than the specifics of the one stock. Could have been the greatest buggy whip making company in the world but it still wasn't going to do well with the switch to cars.

We all accept this implicitly when we talk about booms and recessions. Sure, there were stocks that rose during the 1930s and all that but watching the overall market performance was a better general guide than trying to pick those few.

Looking at sectors - finance, paper - is just a refinement in this selection process. What's the economy, the market, as a whole going to do? OK, so, which sector? Now, once that is decided we can look for those within a better performing sector which are going to outperform their peers. Or, possibly, just buy into some sectorial index.

Investing just because a sectoral PMI looks good would not, to my mind, be all that sensible. Yet it's still useful information for the decision making mill. On the above paper might well be somewhere we don't look for outperformance. Finance, or banks, might well be.

This is about an information source to aid in decision making, not the revelation of a sure fire thing. This information is out there, is compiled each month and readily available. It narrows down the sectors we should be looking at rather than telling us the specific investment we should make.

As such it's valuable information even if it's not quite the tip of the decade that we'd all prefer to be getting.