In our view, Qorvo's last quarterly report offers a simple but critical insight toward valuing companies with significant exposure to 5G networking.

The market seems comfortable with valuing companies at 15-20 future P/Es.

Qorvo seems significantly ahead of the other competitors, Skyworks and Broadcom, in the 5G networking space.

After Qorvo (NASDAQ:QRVO) reported a less-than-stellar financial report at its last conference, a peek into the company's advantageous position with 5G networking seems critically important. This communication method, 5G, will affect both base station providers and device suppliers, even spreading into the mobile-device-only suppliers. Qorvo supplies products for both base stations and mobile devices. From the information provided to analysts during the call, Qorvo appears poised to earn approximately $7 or more per year beginning in two years or less. With the report, the stock reacted positively surpassing Skyworks Solutions (NASDAQ:SWKS) for the first time. We are including a self-generated price chart for Skyworks and Qorvo produced from TradeStation. 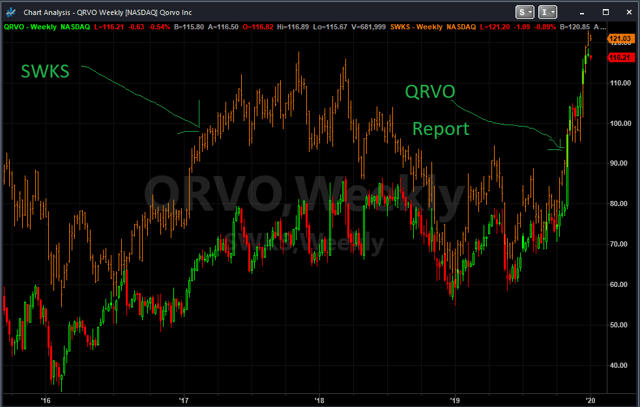 Some Results In Depth

The company outlined several growth themes during the call. The first of several new design wins was announced for multiple years of growth with GaN-based products which were included in the "sub-6 gigahertz massive MIMO" technology. Sub-6 gigahertz technology differs from the other approach, mmWave applications, mainly with size. mmWave is generally considered single or small cell compared with sub-6, which targets multiple users. Several mobile device base carriers in China are beginning the long process of sub-6 implementation. This base station technology change adds at least $1 billion in total available market (NYSE:TAM). We are unsure of the time frame.

"This breakthrough FEM from Qorvo is the right solution at the right time to deliver the capacity, density and thermal performance needed for 4X4 MIMO operation."

With respect to mobile devices, Eric Creviston, president of Qorvo's Mobile Products Group, added that Chinese customers have significantly increased their design activity. Unit volumes didn't see any particular increase in either the December or March quarter, but the design activity from 4G to 5G is. 5G content versus 4G devices is considerably higher, approximately increasing the TAM by $1-2 billion during calendar year 2020. The company believes it is taking market share from at least one other vendor. We believe that it is, and that vendor is Broadcom (NASDAQ:AVGO). Broadcom recently announced that its RF unit is for sale. "Broadcom's RF unit works on the development of FBAR technology... In recent times, the advent of more advanced and sophisticated technologies from rivals like Qorvo has proved to be a stiff competition."

The company also noted that capital spending "remains weighted towards improving the BAW and GaN capabilities." BAW technology is the key in 5G mobile development.

With respect to customers, Qorvo expects significant growth with Samsung (OTC:SSNLF). It is expecting it to be "up very nicely year over year."

Its power management business increased 40% quarter over quarter with an expectation for growth to continue for years.

Regarding the revenue during the next two quarters, "[A]s we see it, we see second-half revenue being roughly in line to down slightly versus what we did in the first half. And since you've got the December guide using that midpoint, that would be a March seasonal decline of around 15% sequentially." Qorvo is expecting mobile to grow sequentially in the third quarter (December) followed by a seasonal decline in the March quarter, yet up double digits year over year.

We note that Canaccord Genuity downgraded Qorvo from buy to hold and raised the price target from $92 to $110. In our belief, this downgrade by Canaccord reflects a very real price lid.

During the question-and-answer portion of the call, Creviston commented on the business being designed out because of trade issues (phones designed without US parts). His comment discussed the value of the integrated approach that without it a compelling handset isn't achievable.

Our own risk concern lies with the possibility of Apple (NASDAQ:AAPL) purchasing the RF business from Broadcom, a possibility discussed in recent articles. Losing Apple would be devastating to both Qorvo and Skyworks Solutions. One article offered this thought: "However, experts believe, with Apple in the process of building its own in-house modem business and its recent acquisition of Intel's smartphone business, might be interested in this acquisition."

After Skyworks Solutions reported on November 12th, it opened negative, down approximately 5 points. It eventually closed nearly unchanged. Unlike Qorvo, Skyworks seems further behind in gaining a foothold in the 5G business. At least, the market perceives it behind. Skyworks offered one comment on 5G that Samsung chose Skyworks to power its first 5G foldable phone. Management also cautioned in terms of orders with Huawei.

Qorvo's progress toward 5G solutions seems earlier than other major competitors; its quiver is quite full of both promise and real products. With this in mind, our belief is Qorvo's results produce some interesting markers about valuing other companies in the same sector. Within a short period, the stock price reached $100+ and is now trading between $110 and $120. At $115, Qorvo's future P/E is 16.5, which is typical of past long-term P/Es within this sector.

The stock's positive response from what was a rather lackluster quarter confirms the market's willingness and confidence in the future by valuing promises rather than actual results. We view this positively for the other sectors or similar players including Cirrus Logic (NASDAQ:CRUS) or Skyworks. We aren't sure how this relates to Broadcom with its effort to sell its RF business. But, in our view, this is a key model for us to predict the future values of others. P/Es in the 15-20 range might be "valuable markers."

Disclosure: I am/we are long CRUS. I wrote this article myself, and it expresses my own opinions. I am not receiving compensation for it (other than from Seeking Alpha). I have no business relationship with any company whose stock is mentioned in this article.

Additional disclosure: We own a sizable amount of Cirrus Logic.

Follow Patient Tech Investor and get email alerts
+
Add a comment
Disagree with this article? Submit your own.
To report a factual error in this article, click here.
Your feedback matters to us!