Cannabis stocks dropped last week in both Canada and the U.S. led by Aurora which was hit by two analyst downgrades.

We highlight the diverging fortunes of Canadian cannabis firms based on their cash balance as liquidity will dominate the conversation in 2020. 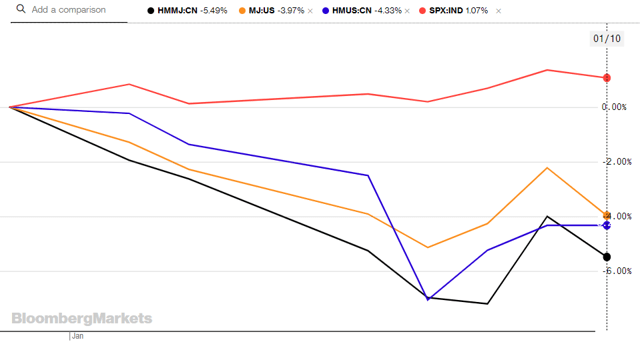 Canada: Aurora Cannabis (ACB) plunged 18% after two research analysts downgraded the stock citing balance sheet risks; we already sounded the alarm on Aurora's cash problem back in December. HEXO (HEXO) continues to drop in the aftermath of its recent financings. Supreme Cannabis (OTCQX:SPRWF) fell 23% after the sudden departure of its CEO. 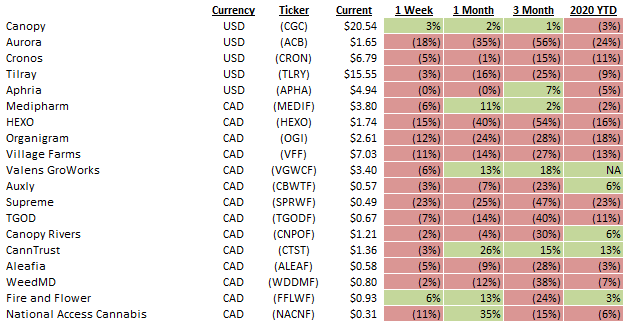 The U.S. and International: Harvest Health (OTCQX:HRVSF) fell 10% after it filed a lawsuit against Falcon, a company it agreed to acquire last year. Curaleaf (OTCQX:CURLF) rose another 7% as it outperforms most peers so far this year. Cresco Labs (OTCQX:CRLBF) fell 9% after closing its acquisition of Origin House. Trulieve (otcpk:TCNNF) dropped 10% after it released a detailed rebuttal to the short report. KushCo (OTCQB:KSHB) dropped 3% after reporting a weak fiscal 2020 Q1 was sales dropped 26% QoQ. 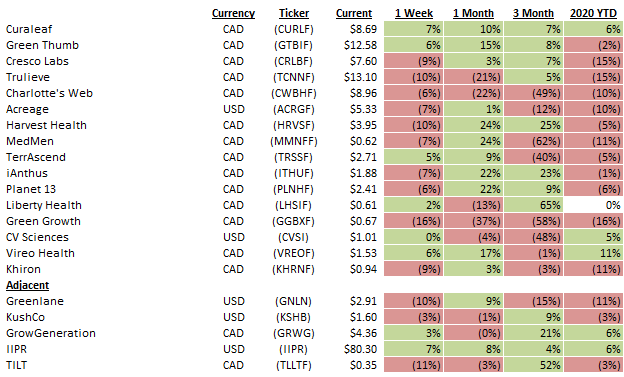 Aurora shares suffered heavy losses last week after two research analysts downgraded the stock citing balance sheet concerns. In fact, we already highlighted Aurora's cash problem in "Aurora Cannabis Is Running Out Of Cash Fast" published in December 2019. We saw the company struggling to sustain itself after it canceled two major greenhouses which must have been a difficult decision given the significant capital already invested. Additionally, Aurora recently listed its MedReleaf Exeter facility for sale at C$17 million and it has been aggressively issuing stock via its ATM program. All signs are pointing to a very difficult 2020 that could see Aurora facing major liquidity issues.

We think the struggles at Aurora highlight a key issue for investors to review when analyzing cannabis companies. It is becoming increasingly important to focus on a firm's staying power in light of the current difficult financing market. We think balance sheet and staying power will dictate the competitive landscape in 2020, especially important for the struggling Canadian firms. We believe Canopy, Cronos (CRON), and Aphria (APHA) are among the strongest while Aurora, Tilray (TLRY), and HEXO could face difficulties. We would generally divide the Canadian players into three categories on this matter:

We think investors should avoid companies with weak balance sheets going into 2020 as several potentially negative events could occur. Dilutive financings, as we've seen at HEXO and TGOD, could crush share price in a short amount of time. Upcoming maturity of out-of-the-money convertible debt could force companies to lower conversion price and significantly dilute existing shareholders. We think Canopy, Cronos, and Aphria will have the most financial flexibility in 2020 which affords them more opportunities to pursue opportunistic acquisitions, expansions into new markets, and, most importantly, the crucial staying power while the industry consolidates.