Grenbrier is an interesting investment opportunity as a way to play on the expected effects of the environmental movement this decade, which should favor rail transport.

The investment opportunity is especially compelling given the recent pullback in its stock price.

The risk of investing in this stock stems from the fact that it would fare very poorly in the event that another global economic slowdown were imminent.

As my regular readers already know, I tend to invest with a longer term time frame in mind. In the past decade or so I only held a stock for less than a year once. When it comes to Greenbrier (GBX), I am not only looking at the particular health of the company, but also at the global industrial trends and factors which I think are likely to progress in Greenbrier's favor. The reason I am considering investing now in particular is because I view the pullback sparked by the latest quarterly results to be a potential buying opportunity. The quarterly report did deliver disappointment in terms of profits , but mostly due to temporary factors with the longer-term prospects still very much positive and intact. One risk factor that is telling me to hold back is the prospect of another global economic slowdown in the next few years, which would most likely make Greenbrier a potentially risky proposition.

Global rail transport is set to expand this decade.

Before I go into the company-specific details which I found to be compelling enough to make me consider investing in its stock I want to briefly cover the factors which I believe will benefit most companies that provide rail development related products, including rail carts which is Greenbrier's main product. As I pointed out in a recent article on Boeing (BA), we can no longer ignore the likely effects that environmental movements will have on industry this decade. In countries like Sweden and Germany we already have airline travel plunging, due to the flight shaming trend. Many of the people opting not to fly in order to save the environment are opting to take the train instead. This is especially the case where flying can be replaced with other modes of transport, such as train travel, which is considered to be far more environmentally friendly. 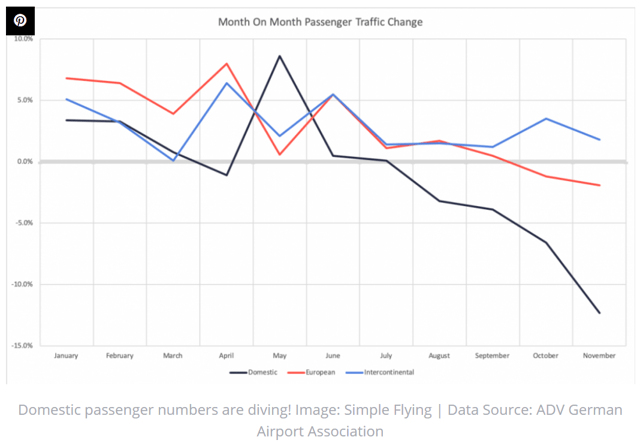 This is where Greenbrier could benefit, where the likes of Boeing stand to potentially lose out. Aside from the effects we see from individual decision-making trends, which are independent from any need to introduce public policy in order to effect changes, there are also a growing number of public policy moves which are likely to move things in favor of rail travel this decade. Climate change fighting initiatives, especially in the Western World, are likely to favor not only passenger travel being shifted towards rail, but also for freight transport, wherever it is feasible.

Aside from the environmental issue, which I see as being highly beneficial for the rail industry in the coming decade, there is also the oil price issue, which I see going into a beneficial direction as far as companies like Greenbrier are concerned. I am aware that this may not necessarily be the current market consensus, but I personally see oil prices headed much higher in the current decade than they were in the second half of last decade. The way I see it the shale miracle will enter the second tier acreage phase, which will need much higher oil prices to make it happen. While it is true that the shale industry managed to get away in the last decade with being a net money pit, I don't think investors will tolerate that same state of affairs this decade. Aside from a number of oil majors which will be able to make up for potential shale losses through their other upstream as well as downstream operations, most shale producers will have to demonstrate an ability to produce profitably, even as they will increasingly shift their operations into their second tier acreage. The global conventional oil industry will also need higher prices going forward as a lack of new discoveries is pushing the industry to squeeze more and more oil out of existing increasingly mature fields. Higher oil prices will create an incentive for rail transport development, especially when it comes to freight transport.

Greenbrier stock is currently struggling due to disappointing profits, but overall company profile still solid. Might still be worth waiting until next economic downturn before investing.

After the shock of the 2008 recession, Greenbrier's revenues and EPS both saw a significant improvement once the economic recovery took hold in 2010. 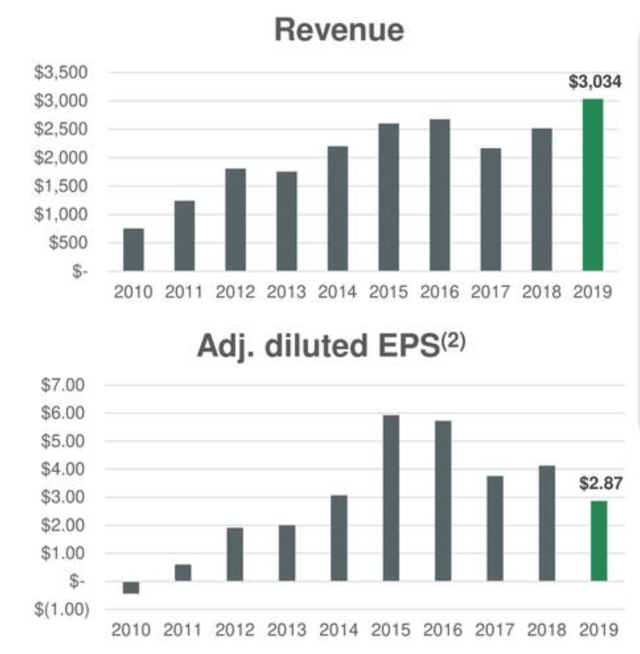 As we can see, while revenues continued to increase, profitability started to decline in the past few years. This mostly has to do with Greenbrier's efforts that are still very much needed in order to improve its operational efficiency after a number of acquisitions. The latest quarter shows that the story is still pretty much the same. Revenues came in at an increase of over 27% on a year over year basis, while EPS missed by $.13/share. Operating inefficiencies were cited as the main culprit for the poor performance in regards to profitability by the company CEO.

Debt has been one of the big issues of concern with this company in the past few years. In this respect things are mostly headed in the right direction, with 2019 standing out as being a year where debt/EBITDA ratio increased to 1.9x, which was a break with the overall positive trend. 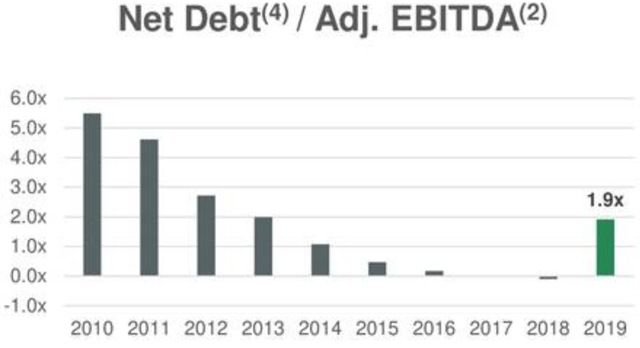 While there has been an increase in debt/EBITDA in the past year from very low non-existent levels, it is nowhere near the levels that Greenbrier experienced a decade ago. Greenbrier estimates that it will pay $30.3 million in interest this year, while this number is set to be cut in half by 2024 according to its own forecasts, to just $16.2 million.

Main risk for Greenbrier is another global economic downturn.

The last recession saw a brutal downturn for Greenbrier stock, mostly due to a steep decline in revenues and profitability. Its stock declined to under $3/share at its lowest point, down from over $40/share reached just a few years before the global economic downturn. It is hard to say what the effect would be if there were to be another economic downturn in the near future, but I am sure that Greenbrier stock would not fare particularly well, even if the decline would not be as dramatic as it was the last time around. If one believes that a decline in global economic growth is imminent, then this should be considered to be a very risky entry point, despite the recent selloff.

If one believes that another severe economic downturn is not likely to occur within the next few years, then I think this would be a great entry point for this stock. I think rail transport is set to do better this decade than current forecasts suggest. The environmental movement is having an effect on how we go about doing things at both individual and collective level through government policies. At this point it is uncertainty in regards to the outlook for the global economy that is causing me to hold back on this potential investment opportunity. In the absence of such worries, this stock would be a strong candidate for my portfolio given the recent pullback in its stock price. In the absence of more clarity in this regard, I might just wait for the opportunity to invest in this stock after the next recession.

Follow Zoltan Ban and get email alerts
+
Add a comment
Disagree with this article? Submit your own.
To report a factual error in this article, click here.
Your feedback matters to us!