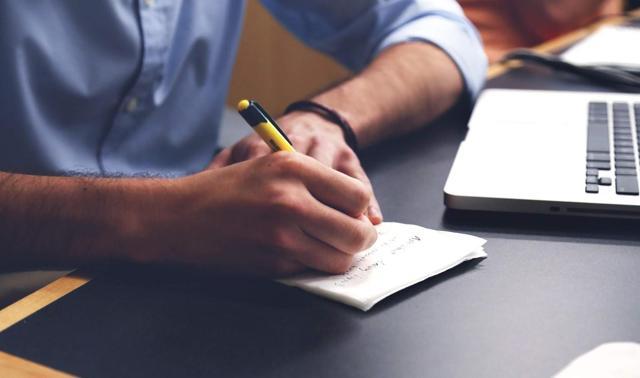 Another year has rolled by and with 2019 officially in the books, it's time to look back to see how dividend growth fared for my portfolio last year.

In this analysis I'll only be examining the positions and related dividend growth held within my main taxable account, FI Portfolio. 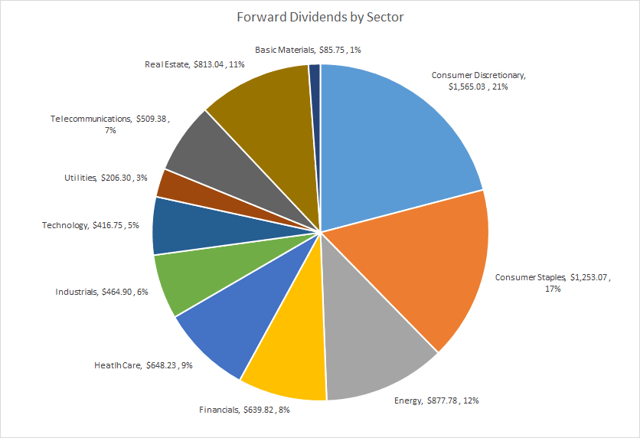 The 2 largest sectors by dividends are focused on the consumer. Consumer discretionary accounts for 21% of my forward dividends with the staples making up 17%. I'd still like to increase my exposure to the staples; however, valuations as a whole don't really allow that for the time being.

Energy is the 3rd largest sector being forecast to provide 12% of my dividends in 2020. I'd still like to reduce my exposure there, mainly through deploying the dividends into other sectors rather than re-investing them as I did throughout much of 2019. Ideally I'd like to get the weighting down to 8-10%.

Looking at the rest of the sector weightings there's nothing that looks too out of whack. Real estate, specifically REITs, is my 4th largest sector and represents 11% of forward dividends which is about where I'd like it to be.

Utilities are the only sector that seems abnormally low for a dividend growth investor but that's largely been due to the markets. In general, utilities have been bid up as the never-ending search for yield has pushed their valuations higher. As such I haven't added utilities to my portfolio and don't intend to do so until valuations become more attractive, whenever that may be. 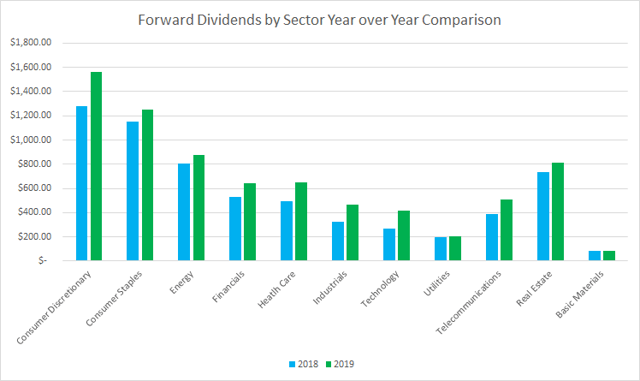 All 11 sectors saw increases for 2019 compared to 2018. The largest increase came in the consumer discretionary sector with a 21% rise, with consumer staples taking second place with an 18% increase.

In order to join one of the Dividend Clubs the position needs to provide at least $50 in annual dividends, the next club up is the $100 level followed by the $200 and $300 level. The number of members includes all positions that have at least $50 in forward dividends while the unique members are those that are capped out in that level.

The $100 Club gained 5 total members pushing the number of positions that pay at least $100 in annual dividends up to 27.

The $200 Club gained 5 members as well compared to 2018 pushing the number of positions that pay at least $200 in annual dividends up to 16. The unique member count gained 2 members, meaning that 2 positions that had previously paid less than $200 in dividends are now paying at least that much.

Unilever (UL) is on the precipice of joining the $50 Club and should do so in 2020. My Archer-Daniels-Midland (ADM), Bank of Nova Scotia (BNS) and Stabucks (SBUX) holdings should all move into the $100 Club with organic dividend growth alone.

If IBM (IBM) can deliver at least 2.1% dividend growth it will join the $200 Club. The other position that is likely to join that level is L3Harris Technologies (LHX) but needs to deliver ~9.3% dividend growth to do so.

My forward dividends are still heavily weighted towards the Top 10 holdings with a number of smaller positions that I continue to try and build up. Given my perceived quality of the Top 10 holdings, I'm comfortable with that much exposure although there's still plenty more companies that I'd like to see move higher on the list. 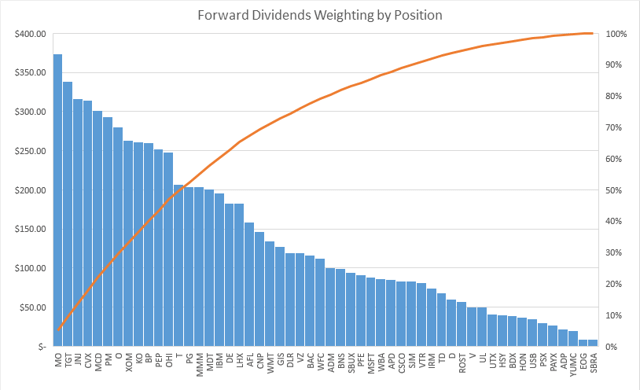 The Top 10 holdings account for 41.1% of my forward dividends which signifies pretty heavy weighting to those positions considering that represents just 18.5% of the total number of holdings that I own. 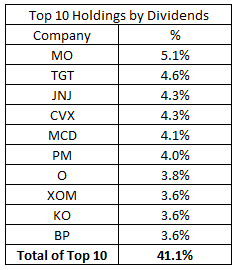 The Top 10 had a bit of a shakeup in 2019 with Altria taking over the pole position and replacing Omega Healthcare Investors (OHI) within the Top 10. Outside of that swap the Top 10 remain the same as 2018 just re-ordered due to some increases, and decreases, to position sizes as well as faster dividend growth from some of the holdings.

At the end of 2019 there were 54 companies held in my FI Portfolio. Unfortunately, 7 of those companies didn't announce raises during the year, but luckily 2019 didn't bring any dividend cuts.

The 7 names are BP (BP), Deere (DE), General Mills (GIS), Sabra (SBRA), United Technologies (UTX), Ventas (VTR) and YUM China (YUMC). Of the 7 stragglers I'm only a little surprised by 3 of them not announcing an increase.

The 3 surprise freezers were Deere, Ventas and YUM China. Deere's freeze was likely due to the double dose of increases announced in 2018 as well as the on-going trade war.

I didn't expect more than a token increase from Ventas like the company gave in 2018, but it decided to not even do that which I'm not really upset about; however, it does mean that I should probably watch Ventas a bit closer.

Sabra has yet to announce a raise since I got shares via the Care Capital Properties (CCP) merger where I had previously acquired shares from the spin-off from Ventas. The position is small at just 5 shares, so there's not much at stake and the current yield of 8.5% is strong enough to just hold on for the ride, although I am considering closing this position.

The struggles in the oil field since ~2015 have kept BP from announcing any significant increases to its dividend while the company focuses on cleaning up the balance sheet. The yield is high enough that I'll continue to hold my shares for the time being.

General Mills continues to go through some growing pains, or rather a lack of growing pains. Sales still haven't surpassed FY 2013's high water mark although it has shown top-line growth each of the last 2 years. The TTM FCF payout ratio sits at just 49%, so I'm hopeful that 2020 will see a return to dividend increases even if it's slow.

My entire FI Portfolio produced 50 total dividend increases throughout 2019 which isn't bad considering that 7 companies did not announce raises during the year. 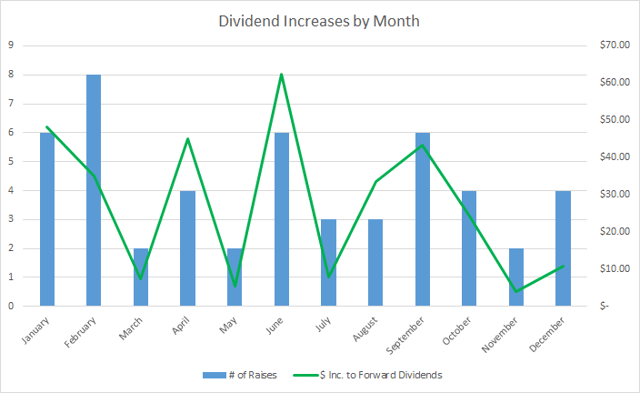 February was the most active month for dividend increases among my FI Portfolio holdings. While June was the largest in dollar terms. Combined the 50 raises increased my forward dividends by $327.14.

Dividend growth investing is all about finding balance, namely in the current yield vs. growth rate trade-off. I'd love to invest in a company paying a 5% yield that can achieve sustainable 15%+ dividend growth, but the reality is that doesn't happen.

I want the core of my investments in what I consider the "sweet spot" for dividend growth investing which is a current yield in the 2.5-4.5% range with 4-9% annual dividend growth rate. The rest is then comprised of the higher yielders and slower growers and of course the lower yielders with higher growth potential. 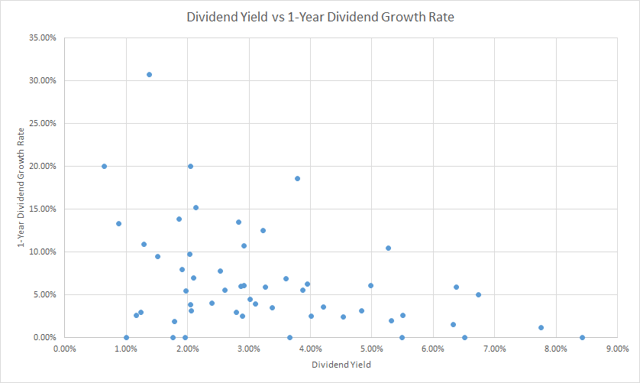 That trend generally held true in 2019. The large clustering of dots in my sweet spot is good to see since it strikes a balance between current yield and future growth.

Since each company carries a different weight in terms of dividends, the average growth rate doesn't mean a whole lot. Rather you have to assign a dividend weighting to each portfolio's dividend growth rate and sum it up.

While I was a bit disappointed with just a 5.23% growth rate, I can't complain too much, considering that does include the 7 positions that announced no raises throughout the year. The other issue is that the high yielding, and slower growing companies, act as an anchor pulling down the weighted dividend growth rate.

Additionally, the positions that typically have high growth rates also carry low dividend yields and unless they are over-weight positions that accelerated dividend growth plays less of a role.

Overall, 2019 was a successful year. Dividend growth for my FI Portfolio was solid, but a bit lower than I'd have liked. Much of that has to do with companies pulling back on dividend growth after a banner 2018 once the corporate tax cuts went into effect. Of course the trade war and increasing calls for recession likely played a role in the muted dividend growth.

Looking at the bigger picture I'm happy with 2019's results despite the lower dividend growth. Each end of quarter month produced over $1,000 in dividends with September and December both crossing the $1,100 mark.

One of my goals for 2019 was to increase my weightings to the companies I already owned and to make the positions and their dividends more impactful. Too often I would initiate a position at what I felt was a good value only to see the share price rise. Subsequently, I wouldn't add because of my anchoring bias to the purchase price even if the shares still represented good value, just not as good.

I did a pretty good job of that throughout 2019, but not as good as I could have. So that will continue to be a goal of mine for 2020.

The two sectors that I'd like to increase my exposure to the most throughout 2020 would be healthcare and consumer staples. I'd also like to increase my utilities exposure, but I'm also going to remain committed to getting value for my investment dollars, especially since available capital is likely to be smaller than in 2019.

Passive Income Pursuit
4.24K Followers
I started a dividend growth investment strategy a few years ago and am aggressively growing my portfolio to churn out enough dividends to reach financial independence.
Follow

Disclosure: I am/we are long UL, ADM, BNS, SBUX, IBM, PM, LHX, MO, OHI, BP, DE, GIS, SBRA, UTX, VTR, YUMC, T, V. I wrote this article myself, and it expresses my own opinions. I am not receiving compensation for it. I have no business relationship with any company whose stock is mentioned in this article.

Additional disclosure: I am not a financial professional. Please consult an investment advisor and do your own due diligence prior to investing. Investing involves risks. All thoughts/ideas presented in this article are the opinions of the author and should not be taken as investment advice.