Open Text is trading near an all-time high.

Business model is primarily based on M&A and has anemic sales growth.

European headwinds and IRS landmine give me cause for hesitation.

I started out today in a great mood, having discovered another promising break-out stock, Open Text Corporation (OTEX). This stock is trading near all-time highs at ~$46.

This stock appears to be ready to keep hitting new heights. My initial read via the most recent earnings presentation ramped up my excitement to a new level. On the surface, this company appears to be a champion of digital transformation, a leader in many areas, such as content services, business networks, media management, process automation and so forth. 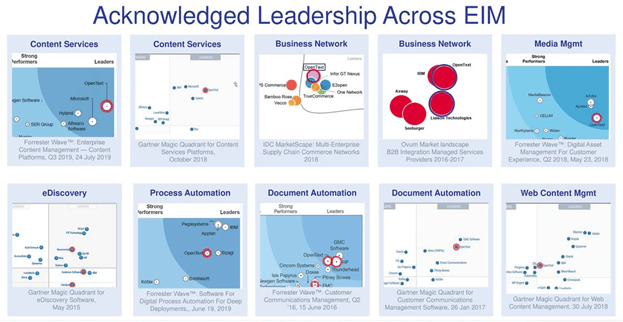 As I continued my research, my initial enthusiasm regarding this company started to wane. For a market leader, I found the company's revenue growth to be unsatisfactory. The company appears to be highly dependent on M&A activity and with substantial revenues generated outside the United States, is apparently at the mercy of global economic conditions. Or at least this is my understanding based on the anemic revenue growth this company is experiencing.

In addition, Open Text appears to have several unresolved tax disputes with various governments. Perhaps one dispute I could understand and accept. But there are three disputes ongoing and who knows what other skeletons there might be hiding in the closet. In the case of the IRS, back taxes and penalties could be substantial, close to $800 million.

Open Text is modestly overvalued according to my relative valuation technique. If the company was a high-growth dynamo with lots of potential then I wouldn't consider the valuation to be a problem. But for a low growth company, I don't feel compelled to jump on the bandwagon.

For all of the above reasons, I am giving Open Text a neutral rating.

In fact, such companies often confound analysts who inevitably attempt to apply their beloved value metrics, with the result being a lost investment opportunity. In place of traditional value factors, I generally focus on other measures, such as revenue growth, free cash flow margin, and the software company "Rule of 40%."

Open Text had annual revenue growth of 2%, significantly lower than in previous years.

While I wasn't able to establish the exact cause of the anemic growth from the earnings call transcript, there were indications that US currency strength, as well as various economic conditions outside the United States, contributed to the result:

While we have not seen any material impacts to our business due to macro related factors, we have taken prudent steps regarding customer spending environments in the UK, due to Brexit uncertainty, especially Europe due to a slowdown in manufacturing and China due to trade tensions. Our US business is looking solid. Over 50% of our revenues and profits are located in the United States.

Open Text’s free cash flow margin TTM has been positive for at least the last 10 years and is currently sitting at a very healthy 21% of revenues.

One industry metric that is often used for software companies is the Rule of 40%. It is an industry rule of thumb that attempts to help software companies ascertain how to balance growth and profitability. There are different ways of calculating the Rule of 40; some analysts use EBITDA and others use the free cash flow margin. I use the free cash flow margin TTM.

The Rule of 40% is interpreted as follows: If a company's growth rate plus free cash flow margin add up to 40% or more, then the SaaS company has growth and cash flow in balance and is considered financially healthy. In Open Text’s case:

The calculation comes out well below 40%. If I were to use the EBITDA margin in place of FCF margin as some analysts do, then the calculation would come out to approximately 40%, and Open Text would pass.

When a company doesn't meet the Rule of 40%, I like to make sure that the company isn't burning cash excessively. One way to make this determination is to examine the SG&A expense margin. This is shown in the chart below. Note that R&D expenses are included in the SG&A expense on this chart.

The SG&A expense margin of approximately 36% is quite low. Company management is frugal with regards to spending. And I actually have to be somewhat critical of that. It seems that the company is too cautious with money to the point where it is not getting sufficient returns.

I determine stock valuation on a relative basis by comparing sales multiples and sales growth to the company's peers. I believe that high-growth companies should be more highly valued than slow-growth companies. After all, growth is a prime factor in valuation models such as DCF. Higher future growth results in higher valuation and, therefore, higher EV/sales multiple.

To illustrate this point, I created a scatter plot of enterprise value/forward sales versus estimated YoY sales growth for the 152 stocks in my digital transformation stock universe.

As can be seen from this scatter plot, Open Text is above the best-fit line, suggesting that its forward sales multiple is modestly higher than its peers', given its estimated future revenue growth rate. My interpretation is that Open Text is valued a little higher than the average stock in my digital transformation universe.

Open Text has missed analysts' sales estimates 3 out of the last 5 quarters. This is one area that I find a little concerning. Past misses tend to be an indicator of future misses.

As of our receipt of the final 2010 NOPA and 2012 NOPA, our estimated potential aggregate liability, as proposed by the IRS, including additional state income taxes plus penalties and interest that may be due, was approximately $770 million, comprised of approximately $455 million in U.S. federal and state taxes, approximately $130 million of penalties, and approximately $185 million of interest. Interest will continue to accrue at the applicable statutory rates until the matter is resolved and may be substantial.

The US and Canadian tax liabilities are substantial, Indian liabilities not as much but there is a pattern here that investors should be wary of. Typically when one sees multiple occurrences of this sort of activity, it is just the tip of the iceberg (my speculation)

Open Text is a significant player in digital transformation and is the market leader in several areas, according to Gartner Magic Quadrant and Forrester Waves, including content services, business networks, media management, and process automation. Given such market leadership in areas that should command a high level of growth, I am somewhat disappointed in Open Text's actual sales growth. The company's earnings are good, but I am looking for substantial revenue growth, and I am not seeing it.

To a large extent, Open Text depends on M&A to fuel its growth. Company management makes acquisitions based on value and fit. I believe the value part of the decision-making process is what is holding growth back. While other digital transformation companies are growing by leaps and bounds, Open Text is stagnating and is subject to the mercy of global economic conditions.

The open and ongoing tax disputes are what ultimately shifted my opinion on this stock. So despite the nice stock price breakout, I am going to take a pass on Open Text. My rating is neutral.

Join My Exclusive Service While the Price is Low ...

Digital Transformation is a once-in-a-lifetime investment opportunity fueled by the need for businesses to convert to the new digital era or risk being left behind. You can take advantage of this opportunity by subscribing to the Digital Transformation marketplace service. Tap into three high-growth portfolios, industry/subindustry tracking spreadsheets, and three unique proprietary rating systems. Don't miss out on the digital revolution. We are still in the early innings and there are plenty of high-growth investment opportunities out there waiting for you!

Follow Steve Auger and get email alerts
+
Add a comment
Disagree with this article? Submit your own.
To report a factual error in this article, click here.
Your feedback matters to us!