CSWC is an internally managed business development company with strong alignment of interests between management and shareholders.

The business model is very similar to that of BDC blue chip, Main Street Capital, in its conservative underwriting and skilled management.

I view CSWC as a baby Main Street Capital that's just getting started on its journey toward creating an industry-leading business.

Shares currently yield 9.6% and have been growing steadily in recent years.

Now, in most cases, an almost 10% yield would be a red flag signaling danger. But in this case, I believe that at least the regular dividend should be safe even in a recessionary environment, making it one of the safest income streams from a BDC. Thus, in my judgement, the company deserves a higher valuation premium than it currently enjoys.

CSWC is a buy here for its high and growing income stream, as well as for capital preservation and potential capital appreciation.

CSWC's core positions are lower middle market companies (EBITDA between $3 million and $15 million) with leverage ratios (debt to EBITDA) in the 2x to 4x range. For these positions, CSWC typically commits $10-20 million in first or second lien debt and often takes equity positions as well. The company has 27 of these positions valued at $384 million as of the most recently reported quarter, and 10.8% have accompanying equity investments. The weighted average yield of this segment is 12%.

But CSWC also invests smaller amounts opportunistically in upper middle market companies (higher than $50 million in EBITDA) that have a bit more debt but also more liquid assets than smaller businesses. CSWC has 11 such positions valued at $92.8 million, and none have accompanying equity investments. The weighted average yield of this segment is 8.4%.

The company has a weighted average yield of 11.1% considering its entire portfolio, and investment mix has consistently remained around 80% debt and 20% equity. Its loans are primarily floating rate (96%), which means that net interest income should grow as the yield curve steepens. A 100 basis point rise in rates, for instance, should result in $0.18 per share in accretion to NII. 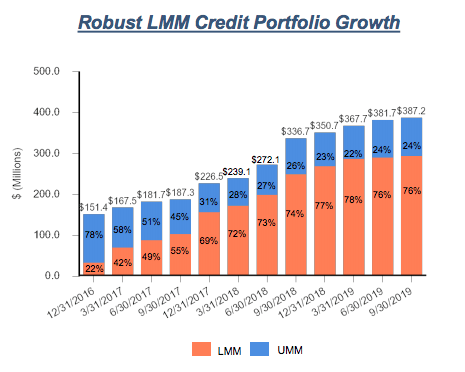 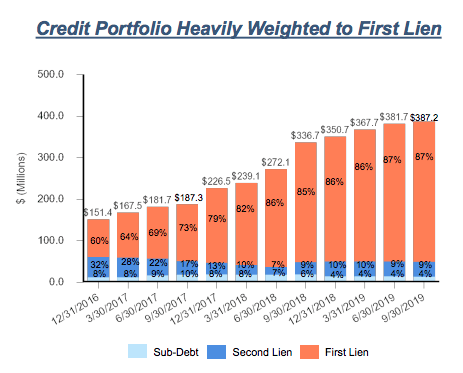 Recent portfolio originations have all been first lien, a few of those coming with equity investments, yielding 8.3% to 12.7%, with the weighted average around 11%. And these high yields are not coming at the expense of capital destruction. Just the opposite. Since launching the current credit strategy in 2015, CSWC has executed 27 portfolio exits generating $213.9 million in proceeds at a cumulative IRR of 15.5%.

These profitable portfolio exits are a primary source of funds for the special dividend, which we'll address shortly.

As covered in a November 2019 article by Closed End Fund Tracker, CSWC's management is "heavily biased toward noncyclical companies and/or companies where we can specifically quantify how they performed in the Great Recession." The financial crisis of 2008 and 2009 and the painful recession that followed provided an example of how different kinds of companies perform in extreme economic weakness. It also gives lenders the ability to learn how to protect themselves in such scenarios.

So we go back and look at Great Recession performance in every deal we consider and then replicate that performance at certain years of our financial projections, making sure the capital structure and our risk position is appropriate for the business and industry. 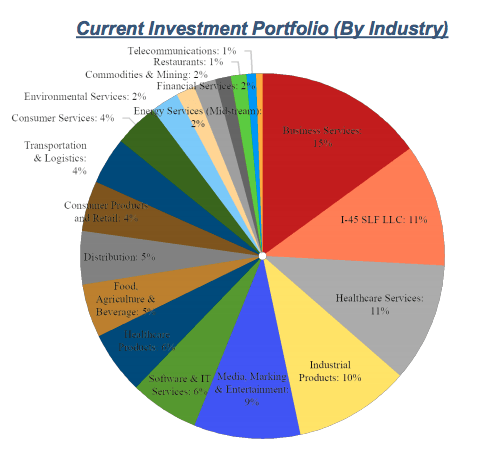 The "I-45 SLF" portion representing 11% of the portfolio is the fund jointly managed with fellow high-quality business development company, Main Street Capital. It is named after the highway (Interstate 45) directly connecting Dallas, where CSWC is headquartered, with Houston, where MAIN is headquartered. And, of course, the "SLF" stands for "Senior Loan Fund."

It's a diversified fund utilizing fairly high leverage, with an average position size of $4.73 million, concentrated in defensive industries like telecommunications and healthcare.

Across the total portfolio, the vast majority (98%) of investment income is recurring, mainly from cash interest and dividends, while loan prepayment and amendment fees are regularly a very small portion.

Somewhat worrisome is the fact that the percentage of non-accrual loans jumped up from 1.5% (where it has hovered in recent years) in the quarter ending on June 30th to 2.6% in the most recently reported quarter. This is something to keep a close eye on going forward, though the figure isn't something to be terribly worried about for now. Considering the company's small size (~$585 million in assets), even one portfolio investment could cause that kind of jump up in the non-accrual percentage.

One of the perks of internal management is a lower cost structure than most of its externally managed peers. Since spinning off its industrial assets in 2015 and becoming a pure play BDC, CSWC's operating expenses as a percentage of assets have steadily fallen. 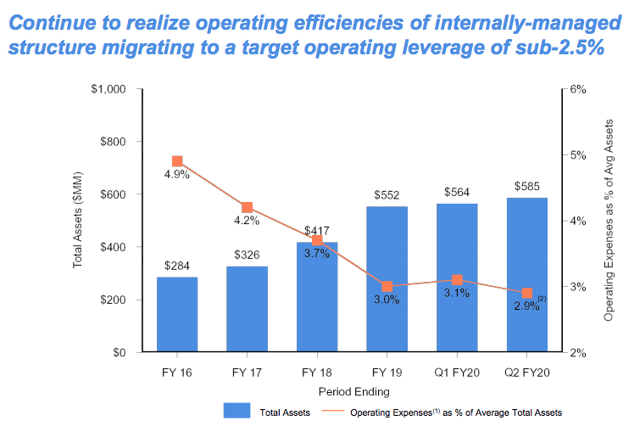 It is perturbing to see net asset value per share eroding over the last year and a half, especially since management has steady growth of NAV as one of their goals. This, too, is something to keep an eye on going forward.

This falling NAV, however, is likely due more to CSWC's choosiness when it comes to investments. Total debt investments for the I-45 portfolio, for instance, have fallen from $238.7 million at the end of 2018 to $214.8 million at the end of September 2019, not because it is the joint venture's intention to draw down the portfolio, but rather because conservatively underwritten yet high-yielding debt investments are not necessarily easy to come by.

The company has also added some balance sheet debt in 2019, going from $206.1 million of total liabilities at the end of 2018 to $256.9 million at the end of September 2019. While necessary to raise capital for future cash-flowing investments, it also drags down NAV in the short term. So also does share issuance.

In the twelve months leading up to September 30th, 2019, CSWC generated $1.68 per share of NII and paid out $1.53 per share in regular dividends for a payout ratio of 91%. Including special dividends, the payout comes to 115%, but that's why they are special. CSWC pays them out when they are able to based on capital gains or other one-time income sources. The company expects to continue paying out the 10 cent special dividend each quarter going forward, so long as it's financially viable. 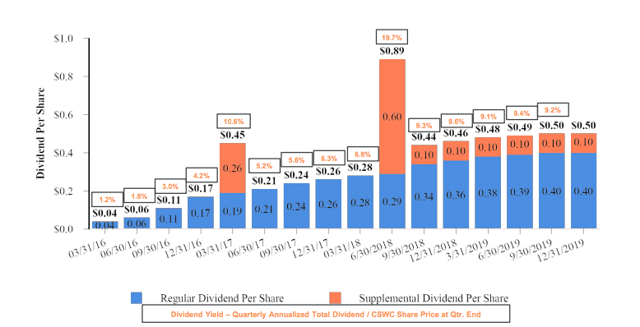 The number in the boxes above the quarterly dividend amounts, in case the label at the bottom is too small to read, is the dividend yield based on the share price at quarter end and the annualized quarterly payout. Notice that, in the past year and a half, the dividend yield has regularly been well over 9%. Today's 9.6% dividend yield is as high as it's been since the December 2018 market selloff.

The regular dividend has grown 17.6% YoY, and while I would not expect that sort of growth every year, it is nice to see that management is committed to returning as much cash to shareholders as possible. If the dividend can be sustained through the next recession, I would expect to see a yield-on-cost in the mid to high teens by 2030, based on the high starting yield.

This shareholder-friendly policy is understandable, given the relatively heavy insider ownership of shares. This year, and especially in the past three months, insider purchases have totaled over $850,000.

CSWC is also something of a family business, as the grandson of former CEO William Thomas (who bears his father and grandfather's namesake as William Thomas III) sits on the board of directors and owns the largest percentage ($7.1 million worth) of the company of the company insiders. Family businesses have a tendency to outperform over long periods of time because of the ultra-long-term focus on value creation. There is less incentive to financially engineer short-term results when one views the business as a multi-generational enterprise.

I love seeing this kind of alignment of interests between management and shareholders.

It is important to make clear that no lender in the private credit markets is immune to recessions. As Pimco reported recently, private credit, leveraged lending, and high yield debt are likely to be hurt if the US economy continues slowing down. This certainly applies to CSWC, whose loans are primarily to private companies and have high yields.

In an environment where non-financial corporate debt to GDP sits at 48%, and speculative grade debt specifically at 35% of GDP, it is imperative to trust in only the smartest, most experienced, most shareholder-aligned managers in the speculative lending industry. The US economy will hit choppy waters eventually, and it is important to have a sturdy vessel and seasoned captain who can navigate them.

Of some comfort is the fact that these riskier types of credit are typically concentrated in more cyclical businesses, which CSWC tries to avoid. I'm glad to see management already thinking about the next recession, whenever it comes, and preparing to ride out the storm as best it can.

Though there are some things to watch closely, such as the high payout ratio, stagnating NAV per share and recent spike in non-performing loans, I find CSWC a wonderful income generator trading at a fair price.

Shares are a BUY for investors with above-average risk tolerance.

Disclosure: I am/we are long MAIN. I wrote this article myself, and it expresses my own opinions. I am not receiving compensation for it (other than from Seeking Alpha). I have no business relationship with any company whose stock is mentioned in this article.

Additional disclosure: I may initiate a long position in CSWC in the next 72 hours.

Follow Cashflow Capitalist and get email alerts
+
Add a comment
Disagree with this article? Submit your own.
To report a factual error in this article, click here.
Your feedback matters to us!