Puma Biotechnology (NASDAQ:PBYI) is a pharmaceutical company producing drugs used in cancer treatments. Their main product is Nerylinx, a compound used to treat breast cancer, specifically those that are HER-2 positive.

The company has seen much volatility in terms of earnings and price. Having reached peaks of almost $250/sh the company now trades at a mere $10 per share. Most recently, the company produced disappointing results, with sales of their main product Nerlynx producing revenues below expectations. Below we can see the latest quarterly results. 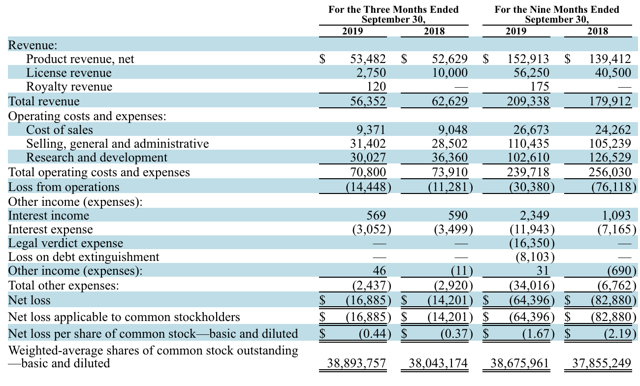 As we can see, quarter to quarter growth has been quite slow. However, if we look at overall growth for the nine months, we are looking at ~14% revenue growth, which is still quite good. Furthermore, this has been achieved with Operating costs maintaining quite stable, which can be seen in the bottom line and the improvement in the company's Balance Sheet. 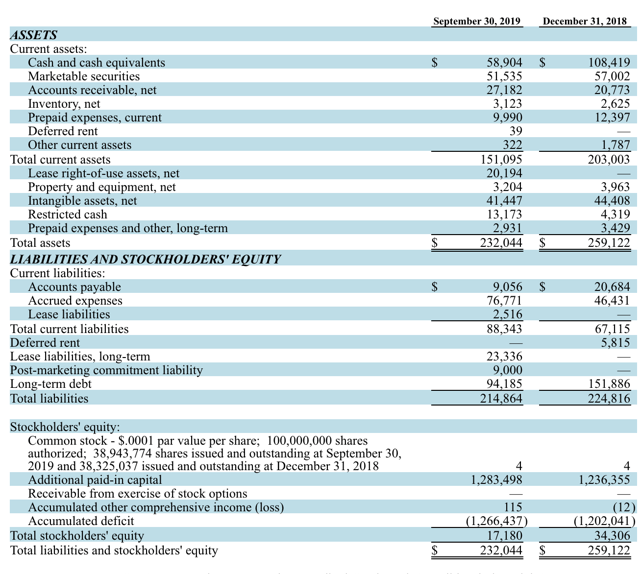 As we can see, Puma has reduced its cash position, but this has only caused a slight reduction in overall liabilities. However, the whole balance sheet has seen a reduction, with assets falling by $27 million quarter to quarter.

The real question with a company like Puma, however, is not necessarily how it is performing right now, but what earning potential it has. In order to know this, we must better understand the product, market and target audience.

Puma Biotech produces and distributes neratinib, commercial name Nerlynx. These are oral tablets that are used to treat early-stage HER2 positive breast cancer. HER2 is a subset of breast cancer which is typically found in about 25% of cases. The treatment lasts about one year and is taken within 2 years after surgery. The complete treatment has a cost of around $14.444, but this is often covered by insurance.

HER2 positive patients are at greater risk of relapse, and this is exactly what Nerlynx tries to tackle. The drug has been proven to reduce relapses in 34% of cases in a 2 year period and 42% reduction in the risk of recurrence at 5 years.

However, as is normal with these kinds of drugs, it can have some nasty side effects such as vomiting, nausea, and diarrhea. In this particular case, Nerlynx has been reported to produce very strong cases of diarrhea and has in fact been cited by management as one of the reasons for the below expected sales performance, with many patients discontinuing the treatment because of it. This has, in fact, prompted the company to conduct a study to combat these symptoms by prescribing Nerlynx with other drugs or simply by reducing the dose. The chart below shows the results of the Phase II CONTROL Trial of Neratinib in which we can see the effects of different treatments for diarrhea. 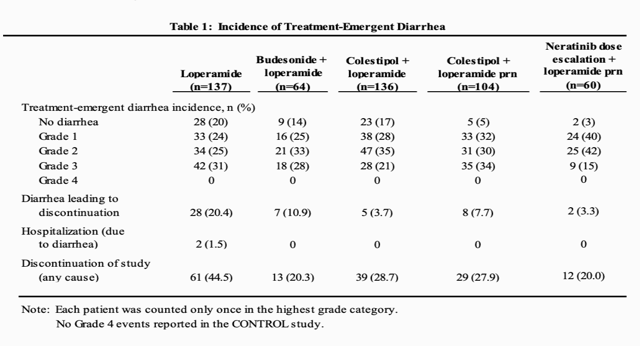 As we can see, the most successful results were found when reducing the dosage of Neratinib (Nerlynx)

Management has painted these results as a success and is now ready to address the problem. But if that is the case, why are shares still falling?

Unfortunately for Puma, the FDA approved Daiichi Sankyo's (OTCPK:DSKYF) antibody-drug conjugate Enhertu, which is also used to treat HER2 positive breast cancer. This means Puma is now in direct competition with Daiichi. We are talking about a company with annual revenues of $8.90 billion and cash of $2.75 billion. Puma Biotechnology, on the other hand, has revenues of $280.42 million and a cash position of $110.44 million. A clear underdog if there ever was one.

But the biggest problem isn’t the fact that they are now in competition with a much larger and more seasoned company, but the fact that their competition's product is objectively superior. As we mentioned before, Puma’s Nerlynx reduced relapses in 34% of cases in a 2 year period and 42% reduction in the risk of recurrence at 5 years, with a 25% effective response rate and median progression-free survival of patients of 5.4 months.

Having said this, not all is lost for Puma Biotech. It is true they are up against what at the moment seems to be a superior product and a competitor with deeper pockets, but Puma still has the advantage of time on their hands, having been in this market since 2017, when Nerlynx was approved. Based on information released in the earnings call we can expect to see a big increase in the licensing revenues for Nerlynx, with Puma’s partners in China and Latin America has recently received marketing approval.

Furthermore, the company is also looking to increase the label of the drug and use it in other lines of treatment.

Based on the results of the NALA trial, Puma filed a supplemental New Drug Application for neratinib for the treatment of third-line HER2-positive metastatic breast cancer in June 2019.

Puma Biotechnology is currently trading at its lowest ever, ~$8. There are many fundamental reasons not to invest in this company. Namely, the competition from Saichii and the fact that they have a superior product. However, things move slowly in this industry and, often, marketing and positioning are more important than the product. To this extent, I do believe in the short-term, Puma is worth more than $8/share. However, I will be surprised if they can turn things around and capture the market in a significant way in the long run.

The Digital Trend
15.29K Followers
Author of Technically Crypto
In-depth analysis on Bitcoin, Altcoins and the technology that powers them.