What do you expect to be the key driver of stock market performance over the course of 2020?

I believe that earnings performance will remain a very important driver for the general stock market (NYSEARCA:SPY). Thanks to various money-printing initiatives (which are nowadays called quantitative easing), there's plenty of money in the world that is waiting to be parked somewhere. At this point, the global "parking lot" for money is the U.S. stock market, which continues its strong rally with limited pullbacks that get bought out rather quickly. The U.S. stock market is supported not only by the performance of the internal economy and earnings growth, but also by its relative safety and attractiveness compared with other investing options in this world.

As for the asset class I'm most interested in, offshore drilling stocks, I expect another year of huge volatility. In fact, the stocks in this group have already had major swings in the beginning of this year, rising and falling together with the moves in oil prices. The key driver for offshore drilling stocks will be the progress in dayrate recovery. The industry is facing a debt wall that starts in 2022 for some drillers, so cash flow and the ability to service debt (and, therefore, to kick the can down the road with refinancing) will play a crucial role.

As we begin 2020, are you bullish or bearish on U.S. stocks and offshore drilling stocks?

I'm generally bullish on U.S. stocks, although I think that this year will bring some meaningful pullbacks since the market is starting the year at all-time highs following a very powerful performance in 2019. I believe that the year can turn out to be very constructive for gold (NYSEARCA:GLD) and gold equities (GDX). Often, gold is referenced as a way to protect investors' money from inflation and/or from market downside. When tensions rise, like in the recent U.S.-Iran case, gold tends to get its share of "safe haven" buying.

However, I think that there is a major story behind gold that is developing right now. The U.S. decided to solve many problems at once and is using sanctions and trade tariffs heavily to get things done in the quickest way possible. Yet Nicolas Maduro from Venezuela has shown the whole world that it is possible to stay in power under heavy sanctions, with a ruined economy and with fleeing people, by using gold as a means to raise money and pay the army. This clever move will not go unnoticed - expect continued gold purchases from China, Russia, Turkey, and literally everyone who has the slightest fear of facing U.S. sanctions for whatever reason right now or sometime in the future. I think that central bank purchases (and speculative purchases on top of such buying) will probably be the biggest driver for gold in the next five years - not only for this year.

As for the offshore drilling stocks, I'm currently neutral following a major run-up in price in the last one and a half months. I maintain my stance that the whole group is highly speculative and better suited for trading rather than buy-and-hold investing.

Which domestic/global issue is most likely to adversely affect U.S. markets in the coming year? 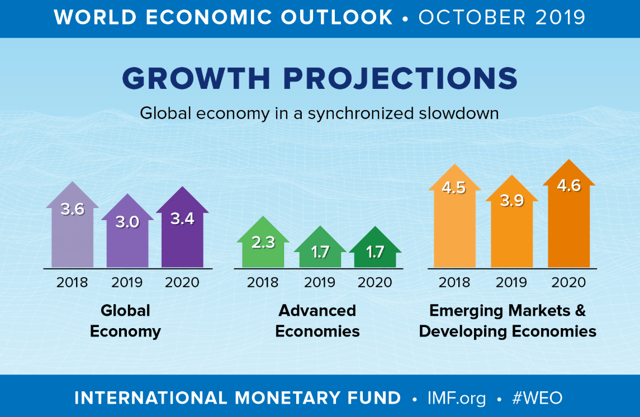 I don't see major issues either with the U.S. economy or with the world economy. A year ago, the media was full of apocalyptic projections of an upcoming recession due to the trade war with China. The trade war went for the whole 2019, and nothing has really crashed. At this point, it looks like continued positive demographics of the world, adoption of better technologies by developing countries and never-ending market support via quantitative easing and low interest rates will successfully lead the global economy through 2020. The biggest risk to U.S. stocks is that they can rise too fast, too soon, which could be followed by a massive unwinding of bullish bets, causing even patient investors to trim their holdings and provoking trading algorithms to sell. Other than this scenario, I don't see material danger for the U.S. markets this year.

How does the political climate affect the risks and opportunities for next year?

The political climate will clearly affect the markets this year since it's an election year. President Trump has already proven his friendliness to markets, so his potential win will either be neutral or bring additional upside, depending on where the stocks will be at that time. I don't see any long-term danger if Joe Biden is elected, either, since the markets will likely take him as Obama 2.0 - Obama's presidency was a recovery time for the market.

In my opinion, the real problems for the market may arise if Biden loses in the primaries to Elizabeth Warren or Bernie Sanders. The market will clearly view them as a danger due to their unfriendly stance towards Wall Street, so I'd expect a selloff on Biden losing primaries and a major selloff if Trump loses to Warren or Sanders. However, at this point everything is calm, since polls show that Biden is comfortably ahead of Sanders and Warren. With this in mind, I'd expect only short-term reactions to political news - every minor selloff will likely be quickly bought out.

What do you expect out of the yield curve in 2020, and what impacts will that have on the equity market and the economy in general?

In terms of asset allocation, how are you positioned as we begin the New Year?

As a trader, I focus on shorter-term opportunities. The recent upside in gold prices did not bring meaningful upside in gold equities - I think it's a very interesting setup for the future. Higher gold prices should make a material difference for higher-cost producers like IAMGOLD (IAG) - despite the company's problems. I think that the $3.20 - $3.30 level is interesting for speculative purchases if it gets tested and holds.

In the offshore drilling space, Pacific Drilling (PACD) is a very interesting speculative play. The dayrates for drillships are starting to increase and the company may have sufficient liquidity to successfully wait for higher dayrates and then refinance its debt. However, this is a very speculative stock so it should be treated as such - it is much better for speculative trading than for buy-and-hold bets.

What "surprise" do you see in the market that isn't currently getting sufficient investor attention?

I think that the market is too skeptical about the gold sector - gold is up this year following U.S.-Iran tensions while gold stocks (measured by the performance of GDX and GDXJ) are down. The gold price has recently hit $1600 per ounce, and while it is now in pullback mode, this issue is not receiving the attention it deserves.

What role will the Fed play in the coming year?

I think that Fed will try to avoid the role of a major newsmaker in 2020. There'll be plenty of headlines in the election year, and the international situation has not been calm from the very beginning, so the markets would like the Fed to play the role of an ''island of serenity" - and I think that the Fed will deliver.

What issue is receiving too much investor attention and/or is already priced in?

The stock market is at all-time highs, investors are very bullish. There are no signs that the market is focusing too much on any issue right now.