Several Seeking Alpha authors seem to be neutral to bearish on the stock. However, I think this doesn't fit GDDY's fundamentals.

In my view, the stock continues to grow its revenues consistently, strengthen its value proposition, and increase its FCF in spite of competitive pressures.

To me, this signals that the bearish thesis is likely wrong, and the stock is probably reasonably valued, given the current macroeconomic environment.

Consequently, I think it's worth buying GDDY's dips.

Lately, various Seeking Alpha authors have presented interesting bearish points regarding GoDaddy Inc. (GDDY). However, I think that the bull case is much stronger, as it's ultimately backed by consistent top-line growth and strong FCF. Moreover, I see GDDY also as an exciting acquisition target from Amazon (AMZN) or Google (GOOG/GOOGL) due to its strategic position in the web hosting market. And lastly, my valuation approaches seem to justify GDDY's current valuation. Consequently, I believe investors should be long-term bullish on GDDY and buy its future dips.

Short-sellers often bring up valid points regarding GDDY's long-term competitive prospects, which raise questions regarding the company's long-term sustainability. For example, other seeking alpha authors have pointed out that GDDY's margins could contract due to competitive pressures against better-capitalized rivals. After all, the domain registration business is more or less undifferentiated. Thus, competitors such as Google and Amazon could very well derail GDDY's promising prospects. Indeed, competing against these tech giants has been incredibly tricky for most companies, and GDDY could suffer the same fate. 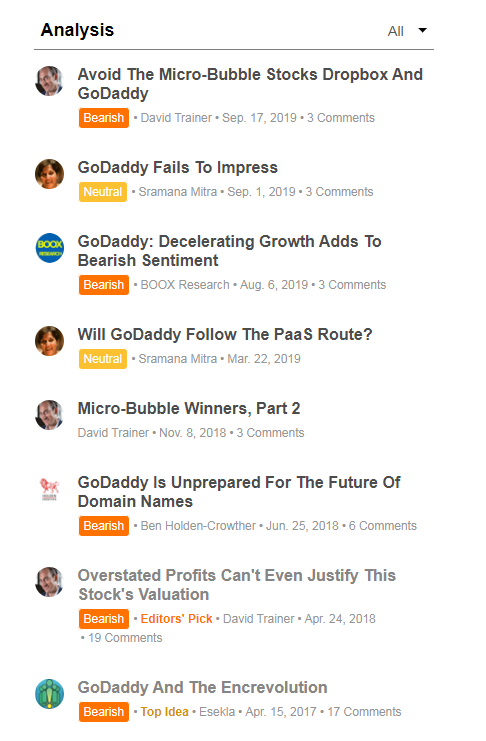 I will concede that GDDY's business moat isn't as robust as some of its competitors. However, I'd say that the fact that GDDY owns 16.77% of the web hosting market says a lot about the health of its business. This means that the company hosts almost 1.5 million websites, which is almost twice as much as its nearest competitor (United Layer). I don't believe this happens by random chance and is likely a by-product of a compelling value proposition.

Moreover, management believes that margins shouldn't change meaningfully for the foreseeable future. This shows GDDY's inherent resiliency in spite of competitive pressures. For example, if VeriSign (NASDAQ:VRSN) increases its prices, GDDY believes it can easily pass it onto its consumers. This is because consumers associate specific domain names with goals and dreams. Accordingly, it should be easy to charge a bit more for the ideal name. This is why GDDY's prices might not be as elastic as bears think.

Furthermore, GDDY's new CEO, Amanpal Bhutani, is optimistic about the company's prospects. Mr. Bhutani was an Expedia senior executive for almost a decade, so I imagine he brings the marketing experience required to differentiate GDDY's offerings. After all, the online travel market is relatively uniform as well. In particular, I liked how Mr. Bhutani seemed to recognize that GDDY's key to success is their ability to make clients' lives easier through seamless technology. It's promising to see the CEO understand that GDDY's success resides in facilitating their clients' lives. Specifically, Mr. Bhutani mentioned that he'd focus on exploiting GDDY's massive user base through investing in GDDY's technology, platform, and interface.

As we look to 2020, I can confidently say that our biggest priorities are delivering a stronger platform, increasing our pace of experimentation, and ultimately accelerating the delivery of the product experiences and outcomes that empower our customers. As I have gotten deeper into the business, I see a lot of promising ideas and talented teams, and the clear potential to move a lot faster, with a particular focus on platform and product.

It's also worth mentioning that, Mr. Bhutani estimates that eventually achieving $5 billion in yearly revenues is entirely attainable. For context, GDDY's current revenue run rate is approximately $3 billion. This means that GDDY's revenues should still grow another whopping 66%. If that happens, GDDY's profits should increase proportionally, which would justify a higher valuation.

Also, I consider this bullish scenario shows why GDDY could also be a compelling acquisition target. In particular, Amazon and Google could be interested in instantly becoming market leaders in web hosting through a GDDY acquisition. This is why GDDY is also an attractive strategic asset in its market segment. Besides, GDDY's growth strategy already includes M&A. So, either way, its market position will continue to strengthen as it acquires competitors. Therefore it wouldn't surprise me to see GDDY being acquired eventually, which bolsters the bull case for the stock.

Currently, GDDY is already operating at slightly better than "break-even." Historically, GDDY has been unprofitable, but recently it turned the corner into profitability. Furthermore, the consensus is that profits and revenues will continue trending higher. In my view, this is due to GDDY's cash flows from operations growing faster than their CAPEX.

As you can see, GDDY's CFOs have vastly outpaced its CAPEX. Consequently, if this trend persists, GDDY's should see considerably larger profits over the long term. But more importantly, GDDY's steady FCF is why, despite being unprofitable, its cash reserves have consistently trended higher over the years. I deem this debunks the bearish thesis of GDDY being on the verge of margins collapsing, and with them, its seemingly "lofty" valuation. 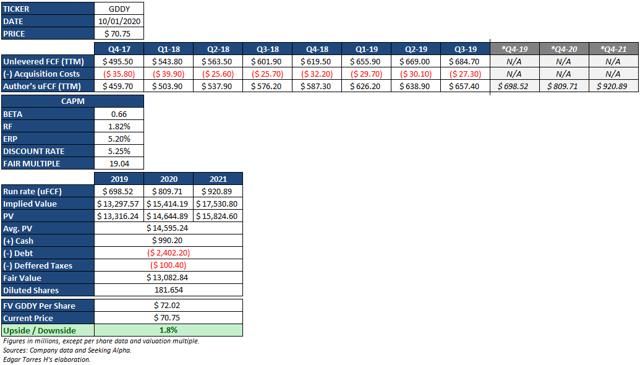 My valuation model shows that the stock is not as expensive as the bears might think. Therefore, if GDDY's current trend continues, the stock price seems fair. This is because, at this rate, GDDY will generate a whopping $1.1 billion in yearly FCF by 2024. This is outstanding after you factor in that in late 2018, the median S&P 500 stock had a 34.66 P/FCF multiple. 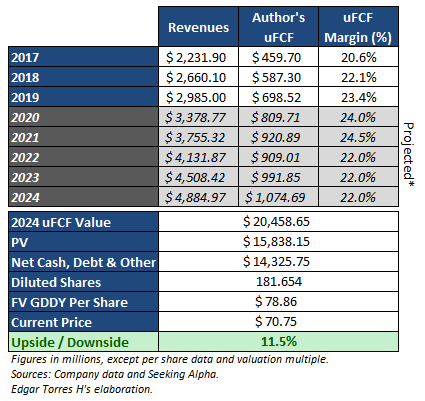 I couldn't find a 2020 updated P/FCF figure for the S&P 500, but I sampled 100 stocks of the index and found that the median is currently 26.38. The actual P/FCF multiple could be higher because stock prices have risen considerably since late 2018. However, I'll use the 26.38 figure to be conservative. Therefore, if GDDY reaches a $1.1 billion run rate by 2024 and we value it at a 26.38 P/FCF multiple, then the implied valuation would be a whopping $29 billion 5 years from now. For context, this would translate to an incredibly 137% price appreciation potential over the next five years (until 2024).

This is why I can't justify thinking GDDY is overvalued. Naturally, these valuation approaches could change significantly if the market multiples decline for any reason. Still, this would probably occur during a market crash, and under such a scenario, every stock tends to drop regardless of its particular circumstances. So I regard that bearish argument as moot.

I consider GDDY has solid long-term business prospects. Its double-digit growth is consistent with healthy business fundamentals. This by itself should debunk a great deal of the bearish thesis. Besides, I believe GDDY's valuation is fair, given the current macroeconomic environment. Even GDDY’s forward PE multiple of 23.86 is in-line with the rest of the market. Consequently, after factoring in GDDY's growth, its valuation multiple becomes wholly justified. Moreover, I estimate that GDDY's strategic position and intrinsic value also make it a potential acquisition target for Amazon or Google. This is why I favor GDDY's bullish thesis over the long term.

However, GDDY isn't quite a value investment yet. Thus, I think it's better to wait for GDDY to pull back. In my opinion, GDDY's ideal entry price is in the $60-$65 price range. That price range offers better value to investors but also coincides with strong technical support. Hence, I suggest you wait for GDDY to revisit that range before initiating a position.

Thank you for reading, and good luck.

Follow Edgar Torres H and get email alerts
+
Add a comment
Disagree with this article? Submit your own.
To report a factual error in this article, click here.
Your feedback matters to us!