The recent BTKi hype is related to cancer indications where Principia Biopharma has little prospect.

Principia Biopharma’s (Nasdaq: PRNB) stock gained more than 50% from our previous assessment. It was mostly driven by rumors about possible buyout from big pharma and hype among BTK inhibitors after Merck’s (Nasdaq: MRK) $2.7 billion bid for AqQule for their lead cancer drug candidate ARQ531 (BTKi).

Are these assumptions justified?

In the previous article I shared my thoughts in detail about the PRN1008 and its vague prospects in pemphigus treatment. Additional data recently shared by the company confirms our previous assessment.

Moreover, expected Phase 2 results of PRN2246/SAR442168 which is planned to be released by Sanofi (SNY) in Q1 2020 even can kill any bullish thesis on Principia Biopharma (PRNB) hurting the company's forward prospects.

And we are pleased to see that the complete response (CR) rate in the Phase 2 Part B trial was 40 percent (six patients) despite most patients being initially treated at a sub-therapeutic dose 400 mg once daily.

It is obvious that complete remission rate remained 40% as we claimed in our previous assessment which is very weak result itself.

These results make future competition for the PRN1008 in pemphigus an impossible task. For those who are interested in details about PRN1008 pemphigus and ITP prospects (also misled in addressable market and statistics) please click here.

BTK inhibitors plays substantial role in cancer treatment and especially in B cell malignancies. There are a number of approved medications based on BTK inhibition for blood malignances such as:

Many are in development for cancer indications.

PRN2246/SAR442168 is irreversible covalent BTK inhibitor which is currently at Phase-2 dose-finding study for the patients with Relapsing Multiple Sclerosis. PRN2246/SAR442168 is licensed to Sanofi (Nasdaq: SNY) and if succeeds Principia Biopharma may receive up to $765 million total milestone payments and up to mid-teens royalties. Sanofi (SNY) has the right to terminate the agreement unilaterally.

There is high probability that Principia Biopharma’s (PRNB) BTK inhibitor does not bear clinical benefit for multiple sclerosis patients. I will try to explain my skepticism on rationale of Principia’s BTK inhibitor in MS.

I will not take much of your time for the detailed description of molecule’s design. First of all, I would just like to briefly describe the main disadvantages of irreversible covalent inhibitors:

Evobrutinib is currently at Phase 3 in patients with Relapsing Multiple Sclerosis.

Despite, to put it mildly, not so promising Phase 2 final data Merck (MRK) decided to go for Phase 3, hoping for better outcome in long term study.

What about rationale and possible success of BTK inhibition in MS?

To make a preliminary assessment we have to dive more into MS and its subtypes as well as the current treatment options and the most promising drug candidates.

Multiple sclerosis (NYSE:MS) is inflammatory and immunity involved disease. The main characteristic of this disease is that immune cells attack axons and myelin, leading to physical disability in more than 30% of patients. MS usually has symptomatic episodes that can occur in long time and in different locations of CNS. MS can develop in years leading to disability and usually starts with sensory loss.

For the detailed description of symptoms please click here.

There is no cure for MS but there are many approved medications for MS management in the each disease course. The most challenging form of MS is Primary Progressive MS (PPMS).

I will try to focus on relapsing forms of MS (primary patient population for PRN2246/SAR442168 clinical trials).

There are 3 major goals for relapsing MS treatments:

The medications used to treat relapsing MS are called disease-modifying therapies (DMTs). For those who are interested in detailed information please click here.

Here are the medications for relapsing MS (RRMS) approved by the FDA:

Now, let's have a look at efficacy performances of injectables and oral drugs:

Source: created by the author based on the FDA approved labels of AVONEX, PLEGRIDY, EXTAVIA 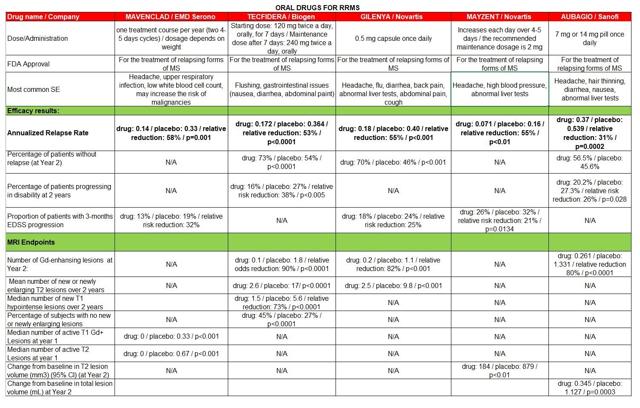 Source: created by the author based on the FDA approved labels of Mavenclad, Tecfidera, Gilenya, Mayzent, Aubagio

More promising drugs are close to the FDA approval

I would like to draw your attention to several promising drugs that await regulatory decisions.

Both studies met the primary endpoints where ofatumumab showed a highly significant and clinically meaningful reduction in the number of confirmed relapses, evaluated as the annualized relapse rate (ARR)[1]. Patients treated with ofatumumab had an ARR of 0.11 and 0.10 compared to Aubagio® (ARR of 0.22 and 0.25) in ASCLEPIOS I and II respectively, corresponding to a reduction in ARR by 50.5% and 58.8% with ofatumumab (p<0.001 in both studies)[1]. Ofatumumab showed highly significant suppression of both Gd+ T1 lesions and new or enlarging T2 lesions compared to Aubagio®, demonstrating a profound suppression of new inflammatory activity[1]. Additionally, ofatumumab showed a relative risk reduction of 34.4% (p=0.002) in 3-month confirmed disability progression (CDP†) and 32.5% (p=0.012) in 6-month CDP versus Aubagio® in pre-specified pooled analyses[1]. Overall ofatumumab, a potent, fully-human antibody targeting CD20 positive B-cells, delivered efficacy with a favorable safety profile[1]. The safety profile of ofatumumab as seen in the ASCLEPIOS studies is in line with the observations from Phase II results[1],[4]. Novartis plans to initiate submissions to health authorities by end of 2019.

Novartis’ (NVS) applications for MS were already accepted by the FDA and EMA.

The decision of the FDA regarding approval of Ozanimod is expected in 1H2020.

I would like to emphasize that both above candidates have shown the results superior to already approved medications (not placebo).

It is obvious that patients need new and more efficient treatment options.

But in order to be competitive, new oral medicines must be superior to existing oral or subcutaneous drugs in terms of efficacy and safety.

Another concern is the way how the data was analyzed. Here is the example of it:

In the lesion analyses, data regarding scans that had been performed within 3 weeks after the receipt of high-dose glucocorticoids were considered to be missing, but the total lesion count was not imputed unless all available scans were affected. Other lesion-count end points were analyzed similarly.

For those who hope that long term trials will bring better results, I would like to emphasize that the currently approved oral medications show EDSS improvement at month 3 (week 12) and substantial decrease in ARR (Annualized Relapse Rate) in the first year of trials as well. 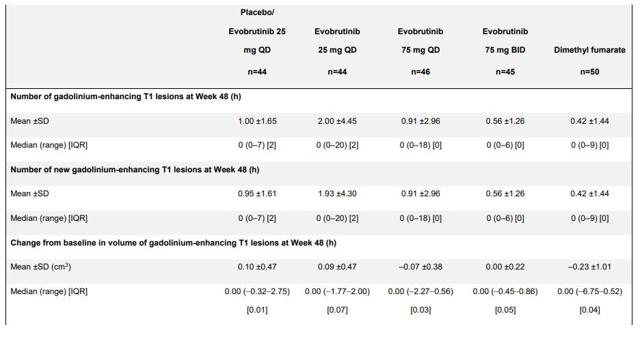 The results at week 48 show Dimethyl Fumarate superiority over company’s BTKi even in lesions volume changes.

Moreover, Relapse-Free status at week 24 and week 48 in Dimethyl Fumarate group was higher than in all evobrutinib cohorts (doses).

May this weak data indicate the high likelihood of lack of efficacy of BTKi in MS?

I want to draw your attention to cytokines network involved in MS pathogenesis:

The above cytokines network and producing cells can be important markers in the modeling of the possible outcomes.

As we can see from the above table the major players here are T cells, Th cells, dendric cells (DCS), plasmacytoid dendritic cells (pDCs), natural killer (NK) cells, macrophages. And BTK role there is not really strong.

IFN-β which is actually first line treatment for RRMS plays an important role in MS pathogenesis and is produced by plasmacytoid dendritic cells (pDCs). BTK itself is engaged in regulation of only TLR9 pathway and leaves TLR7 pathway unchanged. What does it mean? It means that inhibition of BTK can lead to the reduction of TLR9-induced responses in pDCs but can leave TRL7 regulation unchanged. For the details of toll-like receptors role in MS please click here.

We can point out to an interesting finding that another small irreversible BTK inhibitor (ibrutinib) did not affect monocyte FcYR-mediated phagocytosis even at peak concentrations.

Another negative outcome was that BTKi could promote Th1 responses which can lead to increase in IFNy, which is not good for the patients with MS (plus it leaves elevated levels of TNFa unchanged):

Along with this, ibrutinib has already been shown to promote Th1 responses by inhibiting Itk in Th2 cells (17), which could serve as an additional source of IFNγ for the monocytes.

We also found that ibrutinib could not block TNFα production in monocytes primed with IFNγ (Fig. 5D) or in co-cultures of monocytes and NK cells (Fig. 8C). Therefore, within a mixed cell setting, it is likely that FcγR-activated monocytes can still produce not only IL-12 (discussed above) but also other chemokines/cytokines that could serve to activate neighboring cells.

When taken collectively, these data suggest that, although ibrutinib can effectively inhibit proinflammatory responses in isolated cells, its ability to do so within the whole organism is limited. This may explain why early clinical results showed an enhanced effect when adding rituximab or ofatumumab to ibrutinib in treatment for chronic lymphocytic leukemia (20, 21). Anti-CD20 antibodies such as rituximab and obinutuzumab are key components of therapy for diseases such as chronic lymphocytic leukemia or non-Hodgkin lymphoma, and these results suggest a potential mechanism by which their effectiveness would not be compromised by concurrent treatment with a Btk inhibitor.

Based on all above, I personally think that BTK inhibition does not possess strong evidence of clinical benefit in Multiple Sclerosis. However, some benefits can be observed, the likelihood of BTKi to beat the efficacy of the currently approved medications is very low.

On the other hand, weak data will increase the likelihood that Sanofi (SNY) will terminate the license agreement. As it would be better for Sanofi (SNY) to focus on more efficient treatment options rather than funding the development of a weak drug.

As per recent SEC filing and the proceeds from the public offering company had around $376 million in November 2019. If we deduct around $20 million quarterly cash burn it will be $356 million cash in the current balance.

Principia Biopharma (PRNB) has around 40 million of outstanding shares, that makes cash less than 9$ per share. As of January, 8 Principia the stock price was $57.

Principia Biopharma's (PRNB) current market capitalization is around $2 billion. The company’s lead drug candidate is inferior to already available treatment options in pemphigus and has vague perspectives in the limited group of ITP patient population.

At the same time the company is not interesting in terms of buyout, as it has no validated superiority in any of pursued indications.

Based on the all above, I think that Principia Biopharma (NASDAQ:PRNB) currently carries a more significant risk of decline.

Disclosure: I am/we are short PRNB. I wrote this article myself, and it expresses my own opinions. I am not receiving compensation for it (other than from Seeking Alpha). I have no business relationship with any company whose stock is mentioned in this article.

Follow Mehdi Mehdiyev and get email alerts
+
Add a comment
Disagree with this article? Submit your own.
To report a factual error in this article, click here.
Your feedback matters to us!