FDA approval for Ibrexafungerp in VVC and rVVC indications will mark Scynexis' entry into the commercial landscape.

Ibrexafungerp may emerge as preferred antifungal in the hospital setting.

Investors, however, should be aware of these risks.

Today, we will be studying why Scynexis (SCYX) is an attractive investment for 2020.

Scynexis is a clinical-stage biopharmaceutical company focused on the development of innovative anti-infective therapies. The company's lead asset, Ibrexafungerp, is currently being evaluated for a range of fungal infections including VVC (vulvovaginal candidiasis), invasive candidiasis, invasive aspergillosis, and refractory invasive fungal infections.

Why antifungals are emerging as a major growth opportunity?

Besides, there is an increasing appearance of new fungal species and more antifungal resistant species. CDC has also identified Candida Auris or C.auris strain as a multi-drug resistant and serious public threat. This strain is highly contagious and has reported a mortality rate of 60%. Having a drug that has shown clinical activity against Candida Auris can prove to be a huge competitive advantage for Scynexis.

Currently, there are three classes of antifungal drugs in the market. These are polyenes, azoles, and echinocandins. The global antifungal market is estimated to grow at a CAGR of 3.7% from 2017 to $17.72 billion in 2023.

Ibrexafungerp is the first drug belonging to the new class of antifungals called glucan synthase inhibitors. It has demonstrated efficacy against a broad range of fungal infections, including resistant strains.

VVC can emerge as a major commercial opportunity for Scynexis

Scynexis is currently evaluating Ibrexafungerp in Phase 3 trials in VVC and recurrent VVC indication. The company has strategically focused on VVC, a condition with a global prevalence of more than 125 million women and with only one approved product, fluconazole.

Currently, there are more than 14 million prescriptions of fluconazole annually for VVC in the U.S. Besides, around 18 million fluconazole topicals are sold through the OTC (over-the-counter) channel in the U.S. Fluconazole's peak sales are estimated at around $1.2 billion. 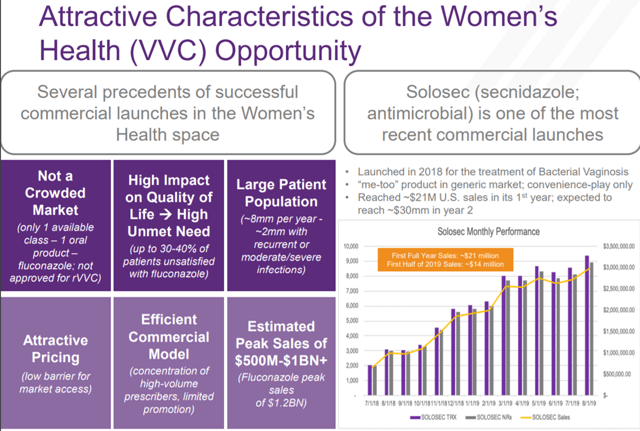 The high prevalence of VVC coupled with the presence of a single product makes it an attractive opportunity for Scynexis. Further, there is no FDA approved therapy for recurrent VVC in the U.S.

Ibrexafungerp is broad-spectrum antifungal therapy and is expected to be effective even against fluconazole-resistant strains. Besides fluconazole is associated with risks such as renal, hepatic, and CNS (central nervous system) toxicity as well as the high potential of drug-drug interactions. Ibrexafungerp is not associated with these serious adverse events. Finally, the drug also does not come with pregnancy warning, thereby making it suitable for use for women in childbearing age.

Scynexis plans to launch the therapy in 2021, almost 21 years after the launch of the previous antifungal class of drugs called Echinocandin. If approved, Ibrexafungerp will be the only FDA approved oral alternative to fluconazole in VVC indication. 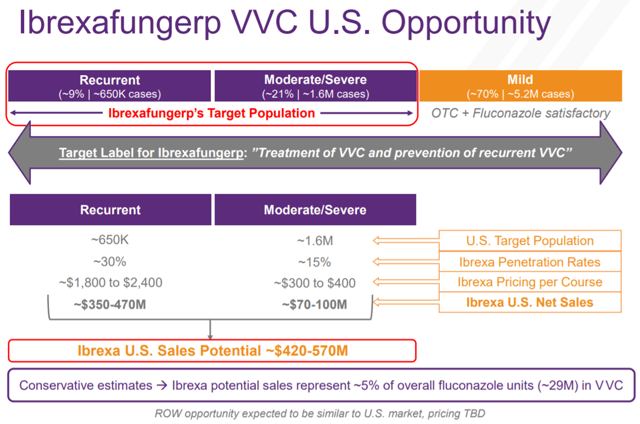 Assuming a target population of moderate-to-severe and recurrent VVC patients in the U.S. and significantly conservative penetration estimates, the company expects Ibrexafungerp's annual U.S. peak sales opportunity to be close to $420 million - $570 million.

Scynexis aims to position oral Ibrexafungerp as a superior alternative for fluconazole. In July 2018, the company reported positive results from Phase 2b, dose-finding study or DOVE trial, comparing Ibrexafungerp with fluconazole. 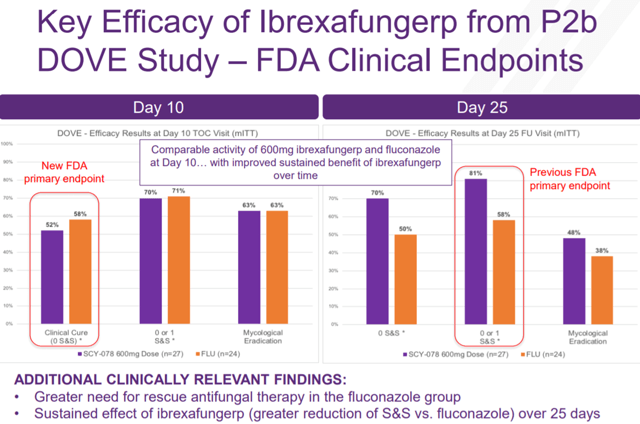 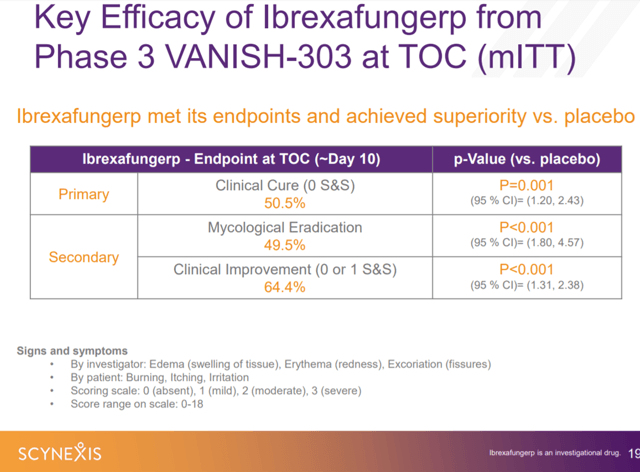 In November 2019, the company reported positive top-line results for its Phase 3 VANISH-303 study evaluating efficacy and safety of Ibrexafungerp as compared to placebo in VVC indication. The trial met its primary endpoint of clinical cure and secondary endpoints of mycological eradication and clinical improvement.

Scynexis also plans to come out with topline data from Phase 3, VANISH-306, trial by the early second quarter of 2020. VANISH-306 is a global study. These trials can also support a European submission of Ibrexafungerp in VVC indication. 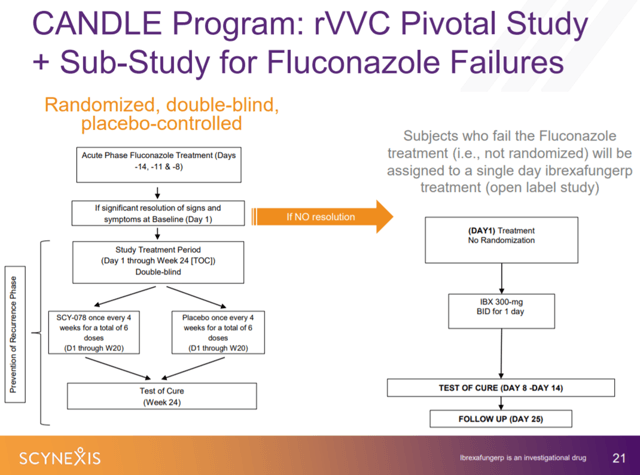 In July 2019, Scynexis entered into an agreement with FDA under SPA (Special Protocol Assessment) related to design, trial population, endpoints and statistical analysis of Phase 3 trial, CANDLE. The company is studying oral Ibrexafungerp for preventing recurrent VVC. The company will also conduct a sub-study assessing the efficacy of Ibrexafungerp in recurrent VVC patients who failed to sufficiently respond to fluconazole.

Scynexis is currently evaluating Ibrexafungerp in Phase 2 trial, SCYNERGIA, as a combination therapy for invasive aspergillosis in the hospital setting. The company is also studying the drug for refractory invasive fungal infections in two on-going open-label trials, FURI and CARES. 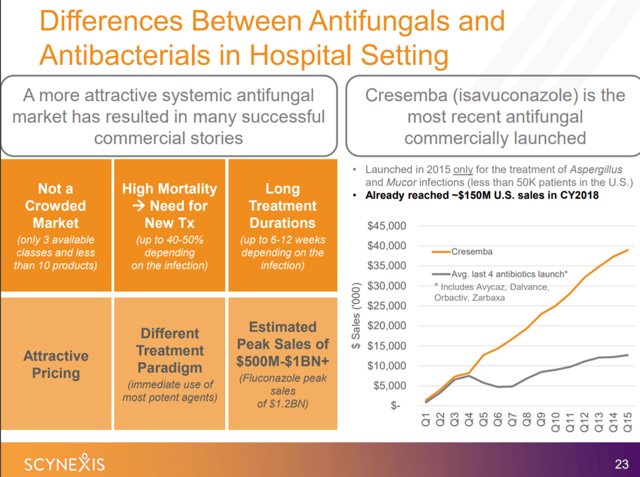 The above diagram shows why invasive fungal infections in the hospital setting can be a big growth driver for Scynexis. Invasive fungal infections account for almost 1.5 million deaths annually. However, the treatment options remain limited such as amphotericin B, fluconazole, Cancidas, and Mycamine. Besides, certain fungal species such as Candida Glabrata and C. Auris are resistant to azoles and echinocandins.

Why Ibrexafungerp may have a bright future in the hospital setting?

Ibrexafungerp is broad-spectrum antifungal therapy and is expected to be effective against Candida, Aspergillus, Pneumocystis, and dimorphic fungi strain in the hospital setting. Fluconazole is fungistatic and inhibits fungal growth. On the other hand, Ibrexafungerp is fungicidal or kills the Candida pathogens. This makes it better suited in the hospital setting, where patients are mostly immuno-compromised. Besides, Ibrexafungerp has demonstrated clinical activity against the dreaded Candida Auris strain.

Being non-azole therapy, Ibrexafungerp has a low risk of drug-drug interactions. The drug has also demonstrated low cross-resistance with echinocandins due to different binding sites. The drug has not reported any safety signals such as renal or liver toxicity in more than 600 exposed patients. Ibrexafungerp's high tissue distribution, including in bone and abscess, also makes it an appropriate pick for the hospital settings.

Scynexis aims to position Ibrexafungerp for salvage use in patients not responding to other antifungals. The company also aims to position the therapy as an oral step-down after intravenous echinocandins for patients with azole-resistant Candida spp. infection. The company then plans to expand usage of the drug for all patients with suspected fungal infection and even prophylactically for patients at risk of fungal infections. Scynexis also aims to extend the use of its drug for chronic candidiasis patients and as a combination treatment with azole for invasive aspergillosis. 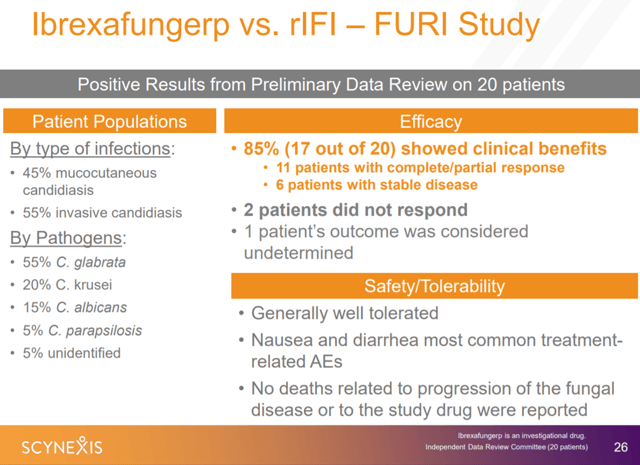 The results are based on 20 out of the planned 60 patients in the FURI trial. These patients were suffering from invasive Candida infections, mainly caused by C. Glabrata and C. krusei organisms which are generally prone to becoming drug-resistant. The patients were at the risk of dying and had not responded to multiple antifungal therapies. In the FURI trial, Ibrexafungerp demonstrated efficacy as salvage therapy, with 11 patients becoming complete or partial responders and six people have stable disease.

In January 2020, the company also announced positive results from the second interim analysis of Phase 3 FURI study evaluating Ibrexafungerp in patients with drug-resistant and difficult to treat fungal infections in the hospital setting.

The results are based on 21 additional patients, which combined with 20 previous patients totaled 41. The trial protocol was amended to include patients suffering from aspergillosis, coccidioidomycosis, histoplasmosis, blastomycosis and other emerging, difficult-to-treat fungal infections. Here, oral Ibrexafungerp demonstrated efficacy in 83% of the patients. 56% were partial or complete responders, while 27% were with stable disease. The 750mg/day dosage of the drug for 90 days prove safe and was tolerated by patients. These results support the continued enrollment in the FURI study.

Besides, Scynexis is also studying the drug in Candida Auris infections in the Phase 3 trial, CARES. The company has reported the efficacy of the drug in its first reported patients.

Based on FURI and CARES studies, the company expects a potential FDA accelerated approval for the drug under FDA's LAPD (limited population antimicrobial drug) pathway. This pathway has been previously used to approve antifungals such as Cancidas and Astellas' triazole Cresemba. Analysts Michael Higgins and Rui Galvao of Ladenburg Thalmann anticipate NDA filing in 2020 and approval in late 2020.

Scynexis is also enrolling in Scynergia Phase 2 trial, to evaluate the combination of oral Ibrexafungerp with azoles in invasive aspergillosis indication. Topline data is anticipated in the first half of 2021.

Investors, however, should consider these risks

Scynexis' future growth prospects are completely dependent on the clinical and commercial success of its lead asset, Ibrexafungerp. This exposes the company to a high degree of business concentration risk. The company is still in the clinical stage and has no commercialized products. Hence, any unfavorable news from its R&D pipeline can have a dramatic effect on the company's share price. Thus, Scynexis is exposed to a high degree of R&D failure risk. Finally, the company is currently loss-making. There is no assurance if and when the company turns profitable.

At the end of the third quarter of fiscal 2019, Scynexis had $28.96 million cash and $14.0 million long-term debt on its balance sheet. In the third quarter, the company reported a net loss of $7.9 million. Assuming this to be a proxy for quarterly cash burn rate, the company may manage to sustain its operations till mid-2020. With revenues not expected in the foreseeable future, the company will require to opt for dilutive financing or debt. If the company opts for non-dilutive financing options through licensing arrangements, it will be at the cost of future upside potential. In December 209, the company announced a public offering of common stock and warrants for raising $35 million.

The company may also face competition from Mycovia Pharmaceuticals in the coming years. Mycovia is studying an investigational oral therapy, VT-1161, in rVVC indications in the Phase 3 VIOLET program.

What price is right for the stock?

In this backdrop, I believe that the target price of $3 will be a conservative estimate for the true value of the stock. Hence, I recommend investors with above-average risk appetite to pick up this stock in 2020.

Follow Healthcare on the Move and get email alerts
+
Add a comment
Disagree with this article? Submit your own.
To report a factual error in this article, click here.
Your feedback matters to us!