Let's start with the Fed's thoughts on interest policy for 2020. This is from the latest meeting minutes (emphasis added):

In their consideration of monetary policy at this meeting, participants judged that it would be appropriate to maintain the target range for the federal funds rate at 1-1/2 to 1-3/4 percent to support sustained expansion of economic activity, strong labor market conditions, and inflation near the Committee's symmetric 2 percent objective. As reflected in their SEP projections, participants regarded the current stance of monetary policy as likely to remain appropriate for a time as long as incoming information about the economy remained broadly consistent with the economic outlook. Of course, if developments emerged that led to a material reassessment of the outlook, the stance of policy would need to adjust in a way that fostered the Committee's dual-mandate objectives.

This is reflected in the "dot plot" that accompanied the minutes: 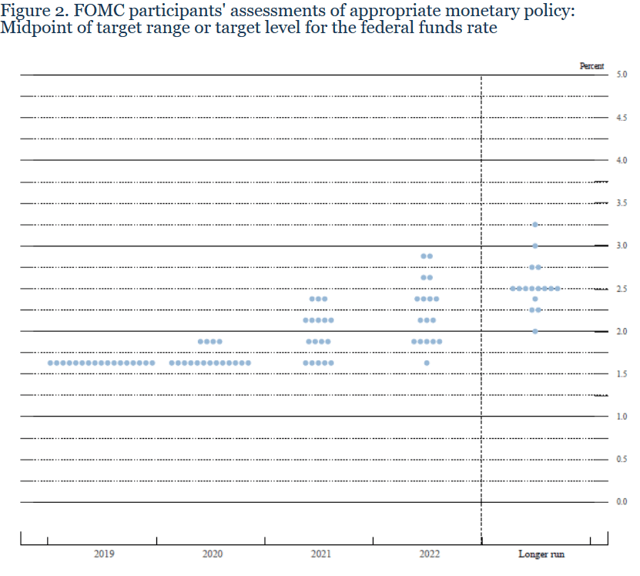 All the Fed presidents believe interest rates will remain at current levels in 2019.

This view was expressed this week by Chicago Fed President Evans:

The U.S. Federal Reserve could go through 2020 without altering its current stance of monetary policy and it would take a slowdown in economic growth to change that path, Chicago Fed President Charles Evans said on Thursday.

"My expectation is we could go through the entire year without rate changes," Evans said during an economic forecast panel discussion in Milwaukee, Wisconsin.

The shift in the stance of monetary policy that we undertook in 2019 was, I believe, well timed and has been providing support to the economy and helping to keep the U.S. outlook on track. I believe that monetary policy is in a good place and should continue to support sustained growth, a strong labor market, and inflation running close to our symmetric 2 percent objective. As long as incoming information about the economy remains broadly consistent with this outlook, the current stance of monetary policy likely will remain appropriate.

So, we start the year with the Fed more or less in agreement that rates will be steady barring.

Now, let's take a look at the bond market, starting with treasuries:

Last week, the entire treasury complex moved modestly lower, with the bigger losses occurring in the long-end of the curve.

Let's place this into a longer context:

Last year, the entire treasury curve had one of its strongest rallies in memory. The Fed was tightening at the same time the global manufacturing slowdown started. These two developments provided strong fuel for the rally. Prices hit highs at the end of last summer and have since been trending modestly lower. Expect this trend to continue for the foreseeable future.

Let's look at the other major bond ETFs:

Remember that in the bond market, we're usually not going to see major, multi-percentage point increases. Instead, bonds usually move at a glacial pace. Last week, munis and junk led the market higher, followed by emerging market debt. But with the exception of the short-end of the market, everybody was modestly higher last week.

As with the treasury market, let's place last week's numbers into a broader context:

The entire treasury market rose last year for the same reasons cited above. However, unlike the treasury market, most sectors have either leveled off and traded sideways or continued to move modestly higher.

So, we start the year with the Fed in a pause, "wait-and-see" mode. This is occurring after a strong bond market rally in the Spring of 2019. Since then, there's been a modest sell-off in the treasury market and a leveling off or slight continuation in other fixed-income markets.

Hale Stewart
10.59K Followers
Hale Stewart spent 5 years as a bond broker in the late 1990s before returning to law school in the early 2000s. He is currently a tax lawyer in Houston, Texas. He has an LLM in domestic and international taxation (MagnaCumLaude). He is the author of the book The Lifetime Income Security Solution. Follow me on Twitter at @originalbonddadYou can read his legal analysis on his law office's blog.
Follow