The next step is a feasibility study, which will likely take about a year to complete.

With manganese ore prices recovering, I think that Jupiter currently has a forward dividend yield of close to 10%.

South Africa-focused Jupiter Mines (OTC:JMXXF)is a company which I covered less than two months ago here and is my top pick in the manganese mining space.

On January 7, Jupiter Mines announced that it has completed the long-awaited concept study on the expansion of its 49.9%-owned Tshipi Borwa manganese mine and the results look fantastic.

The mine and the expansion study

The mine is located in the Kalahari Manganese Field and it has the flexibility to scale production to between 3-million and 3.6-million tonnes a year. It’s situated near several large mines and Jupiter has been vocal of the aspirations of the operating company Tshipi e Ntle to expand in the area: 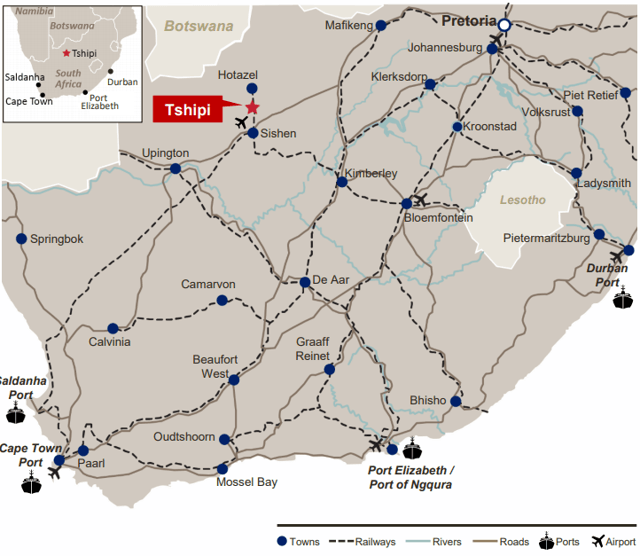 In my latest article, I wrote that the expansion study would foresee the increase of output to around 5mn t/yr from existing infrastructure. Well, the results were a little below that with a base case which includes reaching steady-state exports of 4.5mn t/yr. Since the expansion relies on existing infrastructure, capex is estimated around A$100 million ($69 million) with a +- 30% level of confidence.

Of course, production profiles in excess of the base case scenario were explored but the issue is that they would require more complex infrastructure and higher reliance on road transport (which is costlier than rail transport). Also, a more ambitious expansion plan would likely have issues with the lack of water in the area.

The increase from 3mn t/yr to 4.5mn t/yr will boost global manganese output by around 3% and make Tshipi Borwa one of the largest manganese producers in the world. The Samancor joint venture has an ore output of close to 5mn t/yr and the Assmang joint venture is putting the finishing touches on an expansion project to lift production to 4.6mn t/yr.Overall, South Africa accounts for around a third of global manganese ore output, with the bulk exported to China.

Looking at the financials of the Tshipi Borwa mine expansion, there’s no operating cost guidance but that doesn’t mean some back-of-the-envelope calculation is impossible. If we take the mine’s average FOB cost of production of $2.14/dmtu for Q3 FY20 as a starting point together with a a long-term 37% FOB price of $3.53/dmtu, the expansion will add around A$80 million ($55 million) in annual EBITDA. Since Jupiter owns 49.9% of the mine, this means that the company would be getting A$40 million ($27.5 million) in additional EBITDA against capex of A$50 million ($34.5 million).

Of course, the life of mine would decrease from around 30 years to some 20 years, but the impact on the valuation is almost non-existent from an NPV10 perspective. At the moment, Tshipi Borwa has reserves of 94Mt but they can be significantly expanded as resources stand at 432Mt.

Jupiter is debt-free so it could finance its share of the expansion with loans but I think that a more likely scenario is for the increase in capacity to be financed by the cashflow of the mine’s operating company. This would result in decreased dividends from Jupiter for several years.

However, shareholders don’t need to be concerned for the near future.This is a pretty early-stage study and a feasibility study is expected to start shortly with more detailed costing ofinputs and contracts. The latter is expected to take around a year to complete with another three to reach steady-state exports of 4.5-milliontonne.

Like I forecast in November, prices for South African manganese ore have been steadily recovering and if they stay close to the current level, I expect Jupiter to distribute dividends for its FY21ending February of at least A$0.03 per share, which is equal to a dividend yield of 9.8%.

The expansion study for the Tshipi Borwa mine is very early stage but it provides a glimpse into the amazing potential of the project. I think the expansion can add around $27.5 millions in annual EBITDA for Jupiter at the current manganese ore prices, which means that the payback is less than two years.

I continue to think that Jupiter is becoming a growth story and that Tshipi Borwa can further cut costs thanks to regional consolidation, production expansion and increasing Transnet rail capacity.

Disclosure: I am/we are long JMXXF. I wrote this article myself, and it expresses my own opinions. I am not receiving compensation for it (other than from Seeking Alpha). I have no business relationship with any company whose stock is mentioned in this article.

Follow Gold Panda and get email alerts
+
Add a comment
Disagree with this article? Submit your own.
To report a factual error in this article, click here.
Your feedback matters to us!