Schrödinger (NASDAQ:SDGR) has filed to raise $100 million in an IPO of its common stock, according to an S-1 registration statement.

The firm sells drug and compound discovery software to biopharmaceutical firms and other research organizations worldwide.

New York, NY-based Schrödinger was founded to assist drug development companies and researchers in discovering novel molecules more quickly and at lower cost through all phases of the research process.

Management is headed by Chief Executive Officer Ramy Farid, Ph.D., who has been with the firm since 2002 when he joined as a product manager and was previously an assistant professor in the Chemistry Department at Rutgers University.

Below is a brief overview video of the firm's approach:

The firm says it is currently working on over 25 drug discovery programs with more than ten biopharmaceutical companies, some of which the firm co-founded. Additionally, the company has begun five wholly-owned programs since mid-2018, with a focus on 'developing inhibitors for targets in DNA damage response pathways and genetically defined cancers.'

Schrödinger has received at least $162 million from investors including The Bill & Melinda Gates Foundation Trust and David E. Shaw and related entities.

The company obtains customers through a direct sales force that markets to all types of medical research organizations. The customer base growth has been as follows: 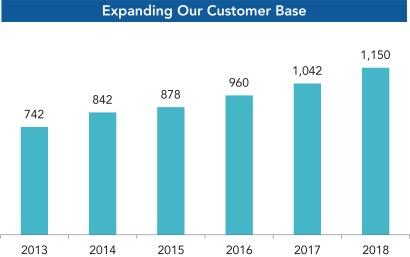 The firm provides customers with a variety of software modules within the drug discovery and materials design verticals, as shown here:

Sales and marketing expenses as a percentage of total revenue have been dropping as revenues have increased, as the figures below indicate:

The sales & marketing efficiency rate, defined as how many dollars of additional new revenue are generated by each dollar of sales & marketing spend, rose to 0.7x in the most recent reporting period, as shown in the table below:

According to a 2019 report by IndustryARC, the North and South American market for computational medicine and drug discovery software reached $2.9 billion 2018.

The main drivers for this expected growth are a continuous desire by researchers to reduce the cost and time to discover new drugs and materials along with the advent of cloud computing which increases collaboration opportunities.

Management says its future success will be based on its ability to continue to improve its platform and demonstrate success in its drug discovery efforts.

Schrödinger’s recent financial results can be summarized as follows:

Below are relevant financial metrics derived from the firm’s registration statement:

Schrödinger intends to raise $100 million in gross proceeds from an IPO of its common stock, although the final amount may differ.

... we currently intend to use the net proceeds from this offering to continue to advance our physics-based computational platform and our internal drug discovery programs, as well as for general corporate purposes, including working capital, operating expenses, and capital expenditures.

Schrödinger is seeking to raise capital from public investors to continue developing its drug discovery platform.

Sales and marketing expenses as a percentage of total revenue are decreasing; its sales & marketing efficiency rate improved slightly in the most recent reporting period.

The market opportunity for drug discovery software is significant and expected to grow moderately in the years ahead.

SDGR has an interesting hybrid approach. It sells software to other firms yet also uses its system to generate drug compound candidates in-house.

Management says it keeps a strict wall between its in-house efforts and customer data.

In addition, the firm has in-licensed platform technology from Columbia University for a variety of aspects of its system. These licenses will require SDGR to pay royalties based on their respective terms.

SDGR has a significant patent portfolio of approximately 60 patents and patent applications.

I look forward to learning more details about management’s pricing and valuation expectations for the IPO.