Albemarle is well-positioned to take advantage of the lithium-ion battery revolution.

Lithium prices will plague Albemarle in the short term.

Lithium producers have experienced a wild ride over the past few years. The rise of EVs (electric vehicles), in particular, has dramatically transformed the lithium industry. In fact, EV standout Tesla (TSLA) alone is having an outsized impact on the lithium markets. Tesla's Gigafactory 1 is going through thousands of metric tons of lithium every year. Given the factory's theoretical annual capacity of 35 GWh, such an appetite for lithium is not surprising.

The spike in demand for lithium has led to stock price surges for lithium producers in 2016 and 2017. However, lithium prices have since dropped significantly as global producers dramatically ramped up lithium production in response to growing demand. While oversupply will continue to affect the lithium chemical compounds market over the next few quarters, the supply-demand dynamics should eventually stabilize.

The price trend of the Global X Lithium ETF shows the impact that lithium price fluctuations have had over major lithium producers.

Albemarle Corporation (ALB), a leader in lithium, will likely be a large beneficiary of long-term growth in lithium demand. While depressed lithium prices have negatively impacted the company over the past few years, this price situation is likely temporary. As producers start to pull back on capacity and lithium demand continues to grow, the lithium market should normalize. Albemarle is in a prime position to reap the benefits of growing lithium demand, considering the fact that the lithium business accounts for ~40% of the company's revenue.

Analysts that are bearish on lithium companies are too focused on the near-term lithium price situation and generally underestimating long-term lithium demand. Relatively new lithium-reliant industries are starting to grow at an extremely rapid rate. The growth of EVs, in particular, will be one of the primary drivers of lithium demand in the long term.

Despite the hype surrounding EV companies like Tesla, the market as a whole has consistently underestimated the potential of EVs. Tesla's continual outperformance amidst a consistent barrage of bearish analyst sentiment is further evidence of EV industry's potential. In fact, Tesla is still one of the most shorted companies in the world. In the face of such skepticism, Tesla continues to climb and is now the most valuable American auto company. Given that Tesla will likely dominate the EV market for the foreseeable future, its performance is a good indicator of the general EV industry's health.

The global EV market has experienced a compounded annual growth rate of ~59% from 2014 to 2018. What's more, the industry's momentum does not seem to be slowing down anytime soon. While EV penetration is still relatively low at 2.2% in 2018, the automobile market is clearly trending towards EVs. Given how much lithium the average EV requires, even a global fleet of a few million EVs requires an immense amount of lithium. The Gigafactory alone consumes a significant percentage of the global lithium supply chain. 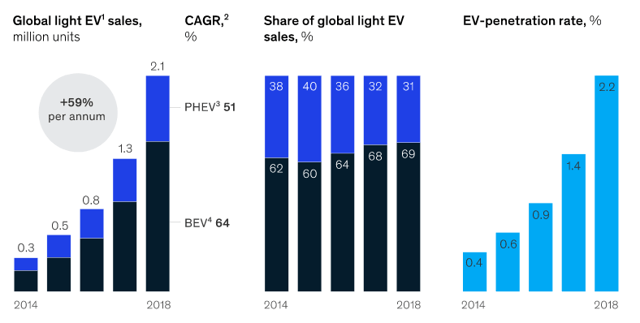 The average passenger EV sold in September 2019 holds 12.2 kg of LCE (lithium carbonate equivalent). If even some of the more pessimistic predictions of long-term global EV penetration come true, current lithium production is far too insufficient to meet such demand. More optimistic predictions from the likes of Bloomberg New Energy Finance have the total EV fleet growing to 548 million units in two decades' time. This means that lithium production would need to grow orders of magnitude larger from what it is today.

Given how lithium-intensive EVs are, Albemarle has much to gain from the EV trend. While EVs will undoubtedly be a main growth driver for lithium demand, renewable energy technologies could be an equally important component of long-term lithium demand. Energy storage has long been the key to the most promising renewable energies like solar and wind.

Given that the common criticism for solar and wind is that they do not provide baseload power, energy storage is vital for solar and wind in the long term. Lithium-ion battery technology is finally hitting a price level where it is economically feasible to pair it with solar. In fact, solar-plus-storage is now becoming a relatively popular product among consumers. Major solar companies like SunPower (SPWR) and SolarEdge (SEDG) are now offering lithium-ion storage solutions to customers.

The growth rate of solar is perhaps even more impressive than the growth of EV. Solar has experienced decades of exponential growth and is showing no signs of stopping anytime soon. In the likely scenario that solar continues its current growth path, demand for energy storage technologies will increase dramatically. Given that lithium-ion is incredibly effective for energy storage even compared to lead-acid, demand for lithium will be bolstered by solar's growth. Much of the technology used in EV batteries are also used in solar storage.

Many analysts are worried that ramping lithium supply will outpace lithium demand in the near term. Even if this were true, this imbalance will likely be short-lived given the organic growth of lithium-dependent industries. The exponential growth potential of solar in particular is being ignored when calculating long-term lithium demand. While the current sales of lithium-ion storage batteries are not that impressive, these numbers could rapidly spike in just a few years' time.

While Albemarle has major businesses in catalysts and bromine specialties, the company's lithium business will likely be the company's main growth driver moving forward. Albemarle's expertise in lithium and lithium derivatives makes the company particularly well-suited for the current high demand market. With ~40% of its annual revenue of ~$3.6 billion to $3.7 billion coming from its lithium business, Albemarle has much to gain from growing lithium demand.

Lithium prices are forecasted to remain low in 2020. While this will certainly negatively impact Albemarle's business, the company has other businesses to fall back on in the meantime. Given that Albemarle's catalyst and bromine businesses offer steady cash, the company is better equipped to deal with the lithium price situation than many competitors. What's more, the lithium glut has been more than priced in at the company's current valuation of $7.5 billion.

Aside from the oversupply situation, Albemarle is facing challenges on many other fronts. The social unrest in Chile could be problematic for Albemarle, given that the company operates two lithium production sites in the country. The protests in Chile could evolve into something far more dangerous to the detriment of Albemarle. An unstable Chile could definitely have a large negative impact on Albemarle's overall lithium operations.

Moreover, Albemarle could face water issues in the country. The availability of water in the Atacama Desert is essential for Albemarle's lithium production. Given multiple groups, from mining corporations to indigenous tribes, are competing for water in the Atacama Desert, Albemarle could have difficulty accessing much-needed water. Albemarle is, however, looking to reduce its reliance on water moving forward. The company plans to use the same amount of water for 85,000 metric tons that it used for 45,000 metric tons.

With the EV and solar PV industry booming, lithium will likely be in high demand over the long term. Albemarle is uniquely situated to take advantage of this trend as the world's largest lithium miner. Despite the fact that oversupply has pushed lithium prices to record lows, Albemarle should be able to overcome this downturn given its diversified business. Albemarle has far more long-term upside at its current market capitalization of $7.5 billion and relatively low forward P/E ratio of 12.

Follow Simple Investment Ideas and get email alerts
+
Add a comment
Disagree with this article? Submit your own.
To report a factual error in this article, click here.
Your feedback matters to us!