On Friday, January 10, the monthly jobs report for December was released, capping off 2019 with a slight miss.

The last ten years have been solid in the labor force, and the unemployment rate is at a 50-year low.

Wages remain a concern, but if that can tick up in 2020, the economy should be in great shape.

Economics is extremely useful as a form of employment for economists. - John Kenneth Galbraith

The numbers are finally in: 2019 was the 8th best year for employment in the past ten years, where the U.S. economy added 2.11 million jobs. Yes, despite it being a banner year for the unemployment rate, it was a slowdown for hiring from 2018's gain of 2.68 million jobs. Given the tax cuts that passed in 2018 and the global uncertainty in 2019 from slowing economics and trade wars, it makes sense that 2019 was not the best year of the decade.

Of course, with a lot of the headwinds subsiding in 2020 already, we could see a rebound in hiring this year. Even in the face of the lowest unemployment rate in 50 years of 3.5%, there could be a boost, given the low current inflation rate and the supportive Federal Reserve. How did the economy add so many jobs in the face of this low unemployment number? By pulling people into work who were otherwise not a part of the number equation. An alternative measure of unemployment, which captures the underemployed and those marginally attached to the workforce, called the U-6 rate, fell to 6.7% - the lowest rate on record, which goes back to 1994. That is why I think we still have some room to go, and wages could be depressed a little bit longer before they start rising. 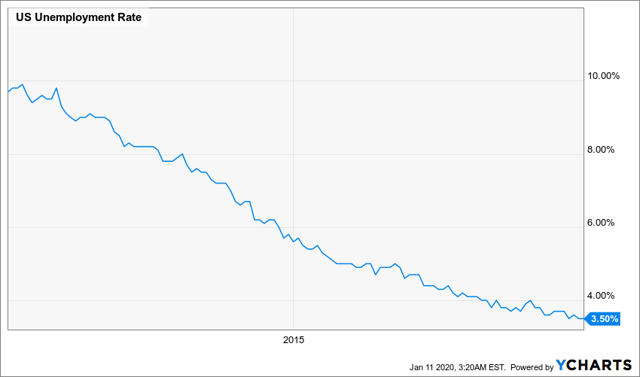 The slow wage growth is a concern for the economy, as you would like to see it tick higher at this point in the business cycle, which would boost our consumer-led GDP. Wages only advanced 2.9% from a year earlier, the smallest annual gain since July 2018. Although wages were weak, they don't overwhelm all of the positives here. And the lack of wage growth could posit that there is still some slack in the labor market, which could propel more jobs in 2020. Inevitably, it will rise at some point, but keeping that wage growth will also allow the Federal Reserve to stay put on their interest rate path, which they do not intend to raise in 2020 as of their last meeting.

Another positive is how well the labor force performed not just in the previous year but the previous ten years. For the decade, the U.S. added 22.6 million jobs, a dramatic turnaround from the 2000s where the economy lost nearly 1 million. This economic machine isn't about to stop chugging anytime soon, either. Those lower rates, in both interest and unemployment, will support the housing market in the U.S. as well. That will only increase confidence and multiply through the economy if we start to see some real gains in consumer's home prices. 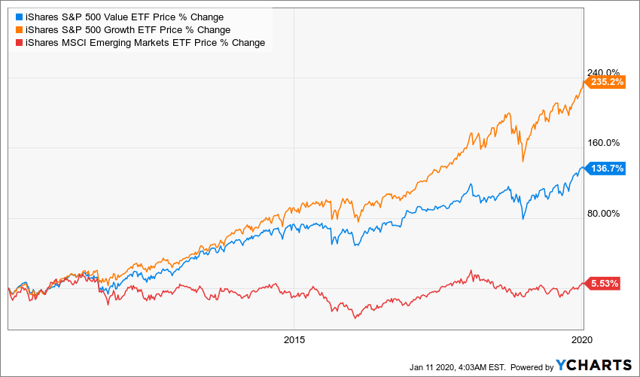 After we received the last big jobs report of 2019, we can finally start looking forward to what 2020 will bring. After a record-breaking labor market where jobs were added for 110 months in a row, one must try to extrapolate how much longer this will keep going and what that means for their investments. I think the show will go on in 2020, and we will see the stock market fly to new highs, more so than we have already seen. The reason is I think we will have a rotation to new leaders, in that the value-stock type trades have been so outperformed in the last decade. Just look at how the S&P 500 value stocks (IVE) performed versus the S&P 500 growth stocks (IVW) during the previous ten years. Even more dispersion is the Emerging Markets (EEM) versus both! I am betting that those gaps close in the next decade, but that all perform well, due to the U.S. dollar losing steam and treasury yields increasing over the near term.

Follow Michael A. Gayed, CFA and get email alerts
+
Add a comment
Disagree with this article? Submit your own.
To report a factual error in this article, click here.
Your feedback matters to us!