When there’s blood in the streets, you have to make a decision as to what kind of investor you will be.

MAC’s A-mall portfolio is unloved by the market.

Even assuming conservative cap rates for the top and bottom tiers, we arrive at a 9% implied cap rate for the remaining A-mall properties.

MAC is a strong buy with tremendous upside for long-term investors.

This is yet another article on mall REITs, specifically Macerich (MAC). While you might think that this is too much, I argue that as the broader market (and many of our best of breed holdings) continue to soar without abandon, it makes perfect sense to give greater attention to one of the most unloved sectors in the market today. The current retail environment has seen an elevated amount of retail bankruptcies and store closures. This plus MAC’s high indebtedness has led shares to slide. I argue that the selloff is overdone by showing that current valuations are implying a 9% cap rate on A-malls. MAC is a strong buy.

I don't think anyone will argue with the assertion that there's blood in the streets at MAC. Just look at the tape action: 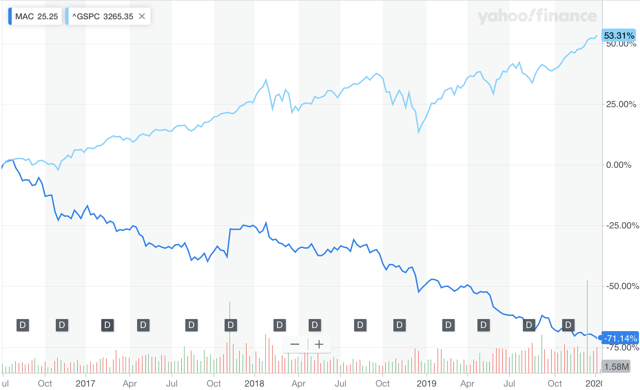 The only way you can have conviction when there’s blood in the streets is to ensure that you know what you are buying. So what are you buying when you buy the stock of MAC?

MAC owns a portfolio of class A malls: 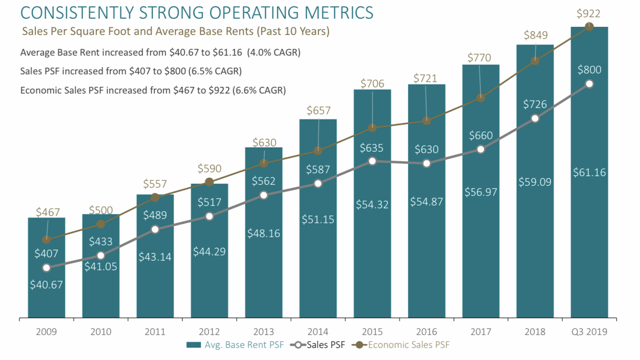 At an average of $800 in tenant sales psf, MAC is clearly in “deep” A-mall territory as A-malls have sales psf of greater than $550. MAC’s properties are in highly-coveted locations. There’s only a handful of A+ properties in the country, but MAC derives a significant amount of revenues from such properties. One example: MAC owns Broadway Plaza in Walnut Creek, California - a center with more than $2,000 in tenant sales psf:

For many years, A-malls were highly treasured assets - in 2015 MAC rejected a bid from Simon Property Group (SPG) that valued shares at a 4.8% cap rate. MAC now trades at around a 7.7% implied cap rate for their portfolio. Same store net operating income (‘SS NOI’) is projected to grow between 0.5% and 1.0% this year, a sharp decline from the typical 3%-4% figures seen in the past. The main culprit has been an elevated amount of retail bankruptcies and store closures. MAC needs time to find long-term replacements for the empty spaces - in the meantime, rent revenues from those spaces decline dramatically as MAC is only able to get around 50% of the previous rent from the temporary leases, and that’s if they’re lucky. Management indicates that retail bankruptcies have impacted SS NOI growth by 200 basis points this year. The bullish thesis is that retail bankruptcies at A-malls are isolated to only a select number of retailers, implying that there's light at the end of the tunnel once MAC works through all the troubled tenants. Improved long-term leased occupancy would significantly drive SS NOI growth as well as allow MAC to raise rents more aggressively. Bears, however, seem convinced that new troubled retailers will emerge every year at an accelerating rate. Such a scenario would be a nightmare for malls because of not only the stagnating if not declining revenues but also the potentially high capital investment required to repurpose the larger spaces such as those for Forever 21. Commentary from MAC and SPG management suggests that the former is the more likely case, and as a bullish shareholder I share the same thoughts: Late 2020 and 2021 should be a real turning point.

I mentioned earlier that shares trade at a 7.7% cap rate (recall that cap rate is computed as NOI/EV, similar to EBITDA/EV). This, however, doesn’t tell the whole picture because of MAC’s A+ properties. A sum of the parts valuation reveals a shocking valuation for the rest of MAC’s A-malls.

(Chart by Best of Breed)

We can view the valuation through yet another lens. If we avoid assigning any valuation to the A+ properties but instead simply assign a 30% cap rate to properties 31 to 40, we can see that the rest of the portfolio (sales psf between $533 and $2,330) sells for a 6.7% cap rate:

Even if we assume apocalyptic cap rates for the lemons in the portfolio, the remaining 82.9% of NOI trades at a 6.7% cap rate. I think that the basic A-mall is worth a cap rate of at most 6.7% - yet MAC’s portfolio is valued at a 6.7% cap rate in spite of their numerous A+ properties.

MAC’s current struggles with long-term leased occupancy may have temporarily justified the high cap rates, but a return to “normal” with 2% to 3% SS NOI growth should cause A-mall cap rates to compress very quickly, perhaps to the 6% range for their overall portfolio. This would lead shares to trade at $48 per share - more than 100% total return upside including dividends.

Pessimism can be blinding, and MAC’s share price valuation can blind many to the deep value in their trophy-mall portfolio. The pessimism has reached a stage where A-malls are selling for cap rates between 6.7% and 10%, depending on which of the above valuation models you believe. I rate shares a strong buy with more than 100% total return upside over the next few years as MAC works through retail bankruptcies and improves long-term leased occupancy.

Invest In Best Of Breed

Best of Breed is the largest community of investors who invest in high quality companies known as “best of breed.” Subscribers get in-depth reports of deeply undervalued best of breed names and overall coverage of the best of breed universe. I focus on companies with strong balance sheets, best in class management teams, and secular growth stories.

Subscribers get access to the Best of Breed Portfolio, a collection of the most undervalued best of breed names in the market.

Disclosure: I am/we are long MAC, SPG. I wrote this article myself, and it expresses my own opinions. I am not receiving compensation for it (other than from Seeking Alpha). I have no business relationship with any company whose stock is mentioned in this article.

Additional disclosure: DISCLAIMER: Julian Lin is not a Registered Investment Advisor or Financial Planner. While the information in his articles and his comments on SeekingAlpha.com or elsewhere may seem like financial advice, it is not, and it is provided for information purposes only. Do your own research or seek the advice of a qualified professional. You are responsible for your own investment decisions.

Follow Julian Lin and get email alerts
+
Add a comment
Disagree with this article? Submit your own.
To report a factual error in this article, click here.
Your feedback matters to us!