Though revenue for the Financial sector is expected to rise just 1% in Q4, according to FactSet, earnings are seen climbing 7.2%.

Some of the biggest hitters in the sector get ready to swing the lumber tomorrow morning when JPMorgan Chase, Citigroup, and Wells Fargo report Q4 results.

JPM, C, and WFC’s Q4 earnings might also reflect a steepening yield curve in Q4 that was aided by the Fed adding significant amounts of short-term liquidity to financial markets.

Sometimes it’s not so much the money you bring in as the money you keep. That definitely seems like the case going into earnings season this week for some of the biggest U.S. banks.

Though revenue for the Financial sector is expected to rise just 1% in Q4, according to FactSet, earnings are seen climbing 7.2%. What does that tell us? It looks like the big hitters are doing an amazing job of managing their books and cutting costs.

Some of the biggest hitters in the sector get ready to swing the lumber tomorrow morning when JPMorgan Chase (JPM), Citigroup (C), and Wells Fargo (WFC) report Q4 results. In terms of profitability, at least two of these three (WFC is the question mark), are expected to do very well despite spending much of 2019 battling a tough yield curve, weak business investment and trade issues.

Along with their expertise in managing expenses (in some cases by closing branches), the big banks likely benefited from healthy U.S. consumers who reached into the wallet or purse for the credit card over and over last year, as well as low mortgage rates that appear to have the housing market in better shape.

“The consumer remains confident and consumer spending continues to buoy economic growth,” FactSet said recently. Consumers also seem to be in good shape to pay back debt and to keep spending, which also helps banks.

Credit quality is very good right now, all else being equal, Briefing.com said; so investors probably won’t be hearing JPM, C, or WFC raising undue concerns about that aspect of the business tomorrow.

JPM, C, and WFC’s Q4 earnings might also reflect a steepening yield curve in Q4 that was aided by the Fed adding significant amounts of short-term liquidity to financial markets since September. This helped weigh on shorter-term yields and possibly improve margins for the banking sector after a negative yield curve and a U.S. government shutdown helped compress earnings for the sector in early 2019.

After disappointing performances in 2018, shares of JPMorgan and Citigroup went into high gear last year, helping lead the Financial sector to gains of around 30%, topping the S&P 500 (SPX). Some of the chart strength in 2019 may have reflected most banks passing government-imposed “stress tests” back around mid-year, which allowed many firms to raise their dividends. C, for instance, raised its quarterly dividend 13% in July. 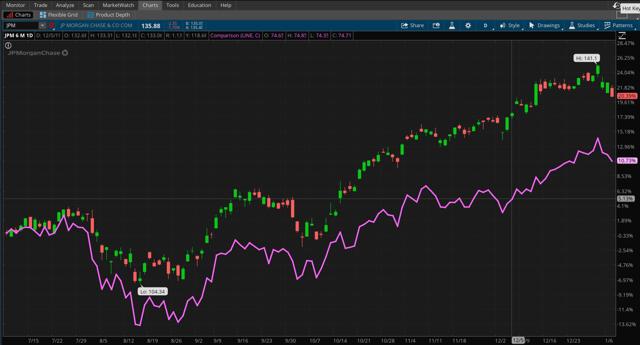 Figure 1: Second-half Rebound: For JPMorgan (candlestick) and Citigroup (C—purple line), the second half of 2019 represented a major turn into green territory as the yield curve strengthened and consumer health boomed. This six-month chart shows clearly how both saw their fortunes improve starting around mid-year. Data source: NYSE. Chart source: The thinkorswim platform from TD Ameritrade. For illustrative purposes only. Past performance does not guarantee future results.

Even struggling Wells Fargo got into the act in 2019, with shares starting to recover in the second half. That might be partly due to a sentiment boost as investors cheered the hiring of a new CEO.

Change is afoot at WFC since Charlie Scharf arrived as the bank’s new chief executive officer in October, Bloomberg reported. He’s held many meetings with executives, grilling them about the ways they do business. That’s likely key for the company, considering it’s been under scrutiny for years about its business practices following the fake accounts scandal a few years back.

Scharf has been publicly quiet since taking over, but that’s likely to change Tuesday when WFC reports Q4 results. At that point, investors could get a better sense of his plans to continue winning back customer trust. Analysts who talked to Bloomberg said they expect some executive changes at WFC, and added that the company needs to overhaul technology and improve earnings. Scharf has a good reputation in the banking world and a strong track record, Briefing.com noted.

A common investor misconception is to think of the big U.S. banks as one entity responding to the same cues. While sometimes the bank stocks move in sync on macroeconomic developments, it’s also important to distinguish them, because they’re not a solid bloc. For instance, falling mortgage levels probably mean more for Wells Fargo than the other banks reporting tomorrow, because WFC has a huge retail mortgage business.

Meanwhile, the global stock trading environment - which saw mostly low volatility in Q4 - could pose a bigger risk to JPMorgan Chase with its big trading business. Consumer strength, assuming it continued in Q4, could help Citigroup with its credit card exposure.

The investment banking businesses at all three firms will probably get a close look from investors after the Q4 market rally. Both stocks and bonds performed strongly in Q4, an odd situation that might have played in favor of the big investment banks.

At the same time, mortgage rates remain below 4% for most loans, according to BankRate.com. The 30-year average has been below 4% the past 32 weeks. Lower rates might be giving the housing market a little new life - which could potentially help lenders - but the lower rates might also eat into some of the big banks’ profit margins. It might be interesting to hear what WFC executives have to say on this topic.

Things have been pretty strong for housing the last few months, fueled in part by low interest rates. New home sales have exceeded 700,000 in five of the last six months, the first time that’s happened since 2007.

The other thing that investors might want to stay tuned for tomorrow is what bank CEOs have to say about the economy in general. JPM’s Jamie Dimon is one financial leader whose comments often get a close read on earnings day, so we’ll wait and hear if he has anything to say about how he sees fundamentals shaping up in coming months.

When JPMorgan Chase releases results, it is expected to report adjusted EPS of $2.34, vs. $1.98 in the prior-year quarter, on revenue of $27.92 billion, according to third-party consensus analyst estimates. Revenue is expected to rise 4.2% year over year.

Options traders have priced in about a 2.5% stock move in either direction around the upcoming earnings release, according to the Market Maker Move indicator on the thinkorswim platform from TD Ameritrade. Implied volatility was at the 21st percentile as of Monday morning. Looking at the January 17 expiration date, put options have been active at the 130, 134, and 135 strikes, but the highest volume has been at the 140 call strike.

Wells Fargo is expected to report adjusted EPS of $1.12, vs. $1.09 in the prior-year quarter, on revenue of $20.12 billion, according to third-party consensus analyst estimates. Revenue is expected to be down 4.1% year over year.

Options traders have priced in a 2.5% stock move in either direction around the coming earnings release, according to the Market Maker Move indicator. Implied volatility was at the 41st percentile as of Monday morning.

Citigroup is expected to report adjusted EPS of $1.84, vs. $1.61 in the prior-year quarter, on revenue of $17.89 billion, according to third-party consensus analyst estimates. Revenue is expected to be up 4.5% year over year.

Options traders have priced in about a 2.9% stock move in either direction around the coming earnings release, according to the Market Maker Move indicator. Implied volatility was at the 16th percentile as of Monday morning.

Call activity for C has been higher in 82 and 85 strikes, while puts have been most active at the 72.5 and 75 strikes.

TD Ameritrade commentary for educational purposes only. Member SIPC. Options involve risks and are not suitable for all investors. Please read Characteristics and Risks of Standardized Options.