The disappointment that led to a 50%+ crash in the shares pertains to the company's old department stores, which had a disappointing Q4 after a fantastic Q3.

However, these department stores will soon all be converted to offprice stores.

Results from four quarters and 97 conversions show that these conversions lift sales by 35%+, so investors shouldn't really worry that much about the old department stores' performance.

We have been watching and writing about Stage Stores (SSI), the department store chain that is converting all of its traditional department stores to the offprice segment.

After a hefty run-up and an almost equally hefty sell-off, we're taking a position for the SHU portfolio, buying 2500 shares at $3.27. The reasons are quite simple:

In a presentation on January 13, management summed up the benefits of offprice: 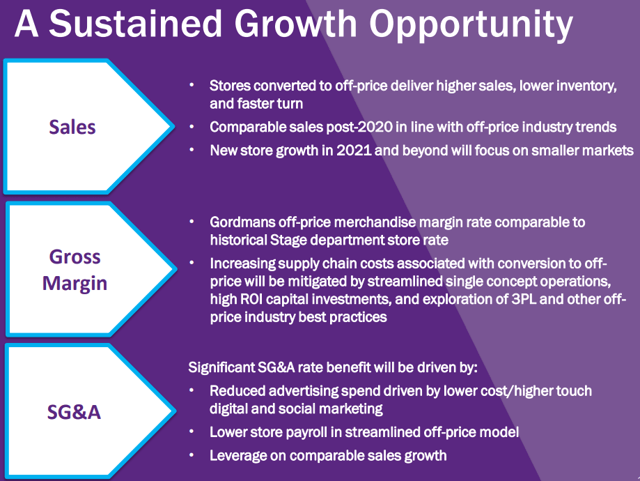 That is, the company expects:

What's more, the evidence from the 97 conversions to date seems to support most of this, especially the sales lift.

The benefits described above are somewhat theoretical. So far, the company has converted a limited number of stores, but from these we can gather that the conversion benefits are real. Here are some relevant data points:

*One new offprice store was opened during 2019.

The company had 68 offprice stores to begin with, from the original acquisition of Gordmans in 2017. However, these are much larger stores, and hence, a bit of an outlier. We're interested in the question whether the conversion from traditional department store to offprice store brings benefits. Here is what we know about the conversions.

The six department stores converted to Gordmans in smaller mid-west markets delivered a shifted comparable sales increase of more than 150% in the fourth quarter. 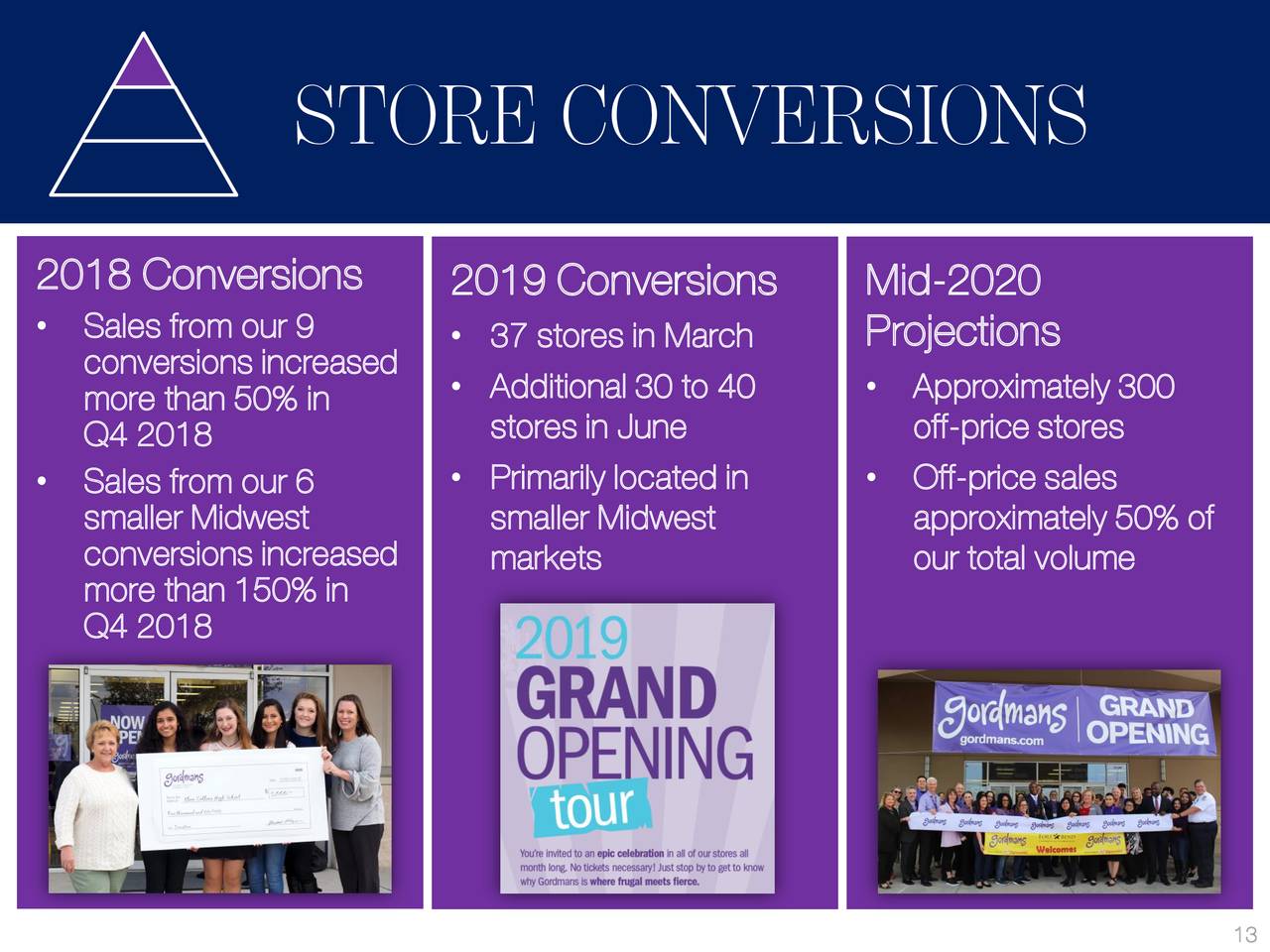 And we know the following from the first two quarters. From the Q1 earnings PR:

From the Q2 earnings PR:

From the Q3 earnings PR:

The 89 department stores converted to off-price during 2019 delivered a combined sales increase of nearly 40% in the third quarter.

In Q1 and Q2, management provides the lift in sales from conversions to company-wide sales. Given that in these quarters only few stores converted, the effect of these conversions on the converted stores is huge.

We calculated in a previous article that in Q2, converting 35 stores lifting company-wide sales by 150bp, which means that the sales in those 35 stores increased by 35%.

In Q1, there were 37 conversions lifting company-wide comps by 240bp, so the effect was even larger in the quarter.

Thus, we have conversion results from Q4 2018 until Q3 2019 - four quarters in which the conversions lifted the sales in the converted stores by a minimum of 35%.

We would urge investors to concentrate on these benefits, simply because they are fairly robust, containing results from four quarters and involving 97 conversions.

That store conversions lift sales in converted stores by 35%+ seems to qualify as a stylized fact, i.e., it's supported by all the data out there and not contradicted by any data we are aware of.

That is still no guarantee that:

But even if the remaining conversions produce only, say, 20% lift in sales, this is still a huge benefit, simply because we still have 542 conversions to go, or 77% of the company. And there are no real reasons to think that the conversions yet to come will produce significantly less benefits compared to the conversions already executed.

It's too early, and we have insufficient data to produce any hard conclusions on the effect of conversions on other company metrics, like OpEx. But keep in mind that OpEx has declined markedly in Q3 as well. On an adjusted basis, from 30.2% of revenue in Q3 2018 to 24% in Q3 2019, so it certainly hasn't harmed OpEx.

It's also too early to answer whether management can grow the company once it's 100% offprice. Evidence from the legacy Gordmans stores might not tell much, as these are much bigger stores situated in more competitive environments, and management's attention was probably elsewhere (trying to save the company, which was mostly department stores).

So we worry about that after all stores have been converted (by Q3 this year) and they have the undivided attention of management. If they can't grow these, they could hire somebody who knows how. There will be time to worry about that, but that time is not now.

Q3 produced also something else: +17.4% company-wide comps. Given the small amount of conversions, only a fraction of this can have been produced by conversions (just like in Q4 2018 and Q1, Q2 2019). There was something else going on. Here are the candidates:

These are by no means mutually exclusive, and we think that all three played a role (even if we struggled previously with accepting the role of promotions, as these seemed to be limited to the stores that were supposed to convert and it didn't seem to involve major discounting, given the favorable margin development).

In fact, it doesn't really matter, even if the shares exploded on the news and now have come back down to earth when Q4 turns out to be rather disappointing.

On the morning of Monday, the 13th of January, management delivered a bit of a sobering news, arguing that (from the company PR):

The shares crashed 50%+, and we took advantage of that, as for us it doesn't really matter all that much what happened in the old department stores. Of course, it's better if they did well, as it improves company finances and debt levels, but what matters to us is the lift from conversions. 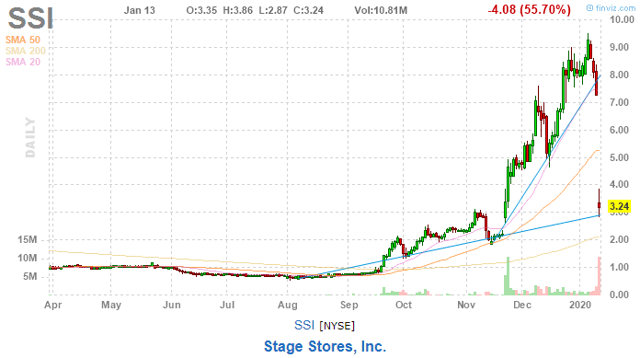 Since Q4 didn't contain any conversions, they played no role. So, in Q3, the old department stores had an unbelievable quarter, and in Q4 they're back down to earth (albeit still with rising comps, and there were store closures in Q4 which are likely to have contributed to these).

Investors seem to panic now that the company's department stores had a normal quarter, after the unbelievably good Q3.

We don't think this is a reason for 50%+ swings in the stock price, as these old department stores will soon be history and the lift from conversion seems pretty robust to us. Keep in mind, the vast majority of conversions is yet to come.

Disclosure: I am/we are long SSI. I wrote this article myself, and it expresses my own opinions. I am not receiving compensation for it (other than from Seeking Alpha). I have no business relationship with any company whose stock is mentioned in this article.

Follow Shareholders Unite and get email alerts
+
Add a comment
Disagree with this article? Submit your own.
To report a factual error in this article, click here.
Your feedback matters to us!