Brazil's current inventory of physical infrastructure, relative to GDP, is smaller than that of most countries with comparable income levels.

Although public spending has stabilized since 2015 as a proportion of GDP, the continued expansion of mandatory current spending has kept the fiscal space available for public infrastructure shrinking.

The ongoing shift in Brazil from being public sector-led to having a higher role of the private sector in credit and investments, including infrastructure, is opening new opportunities.

A recent Ipsos survey found the Brazilian population to be the most dissatisfied with infrastructure services (transportation, energy, water and telecommunications) among the 28 countries covered by the work. Not surprising if we observe the lack of infrastructure investments in Brazil since the 1980s.

According to estimates by the economist Cláudio Frischtak, from Inter B., while Brazil's Gross Domestic Product (GDP) doubled in real terms between 1990 and 2016, the stock of infrastructure capacity grew by just 27 %. Chart 1 displays the downfall of Brazil’s infrastructure capital stock as a proportion to GDP. 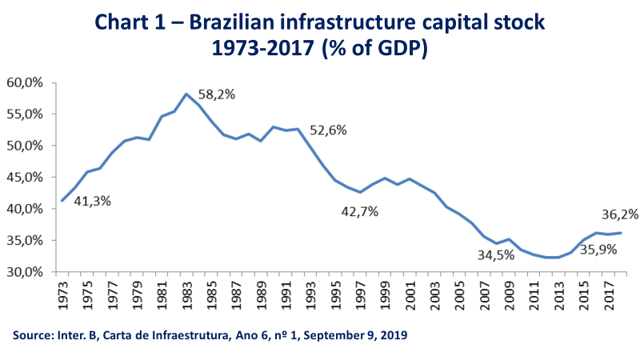 Figures from a World Bank report (Raiser et al, 2017) point to infrastructure investments averaging over 5% of GDP between the 1920s and 1980s, a period in which per capita income grew at an annual rate average of 4% and urbanization reached levels of 60% in 1980. In the last two decades, however, the pace of investment has fallen to less than 2.5% of GDP, even below its maintenance needs (Chart 2, left side).

Brazil's current inventory of physical infrastructure, relative to GDP, is smaller than most countries with comparable income levels. Although access to electricity and telecommunications has improved since the 1990s, basic sanitation and transportation networks are falling short of those of their peers - even when one considers the country's relatively high territorial dispersion and low population density. 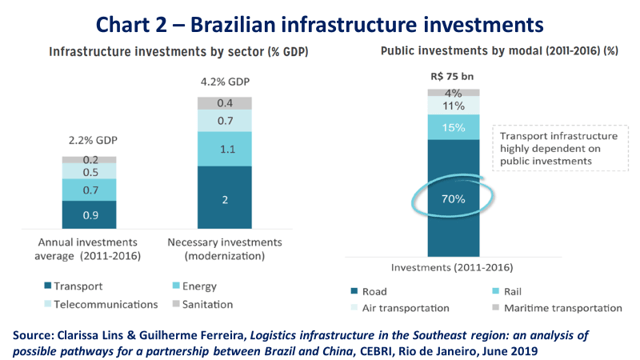 This lack of infrastructure investments has brought a cost in terms of poor productivity performance and slower growth rates. Substantial negative effects in terms of wasted resources - lost work time, misallocation of resources, product losses etc. - derive from poor infrastructure and poor energy supply and connectivity conditions in areas such as transportation, logistics, and information and communication technology. Lack of public investment has been hurting potential GDP growth both directly and indirectly by discouraging private investment. Low coverage in sanitation has also unfavorable implications for poor people (Chart 3). 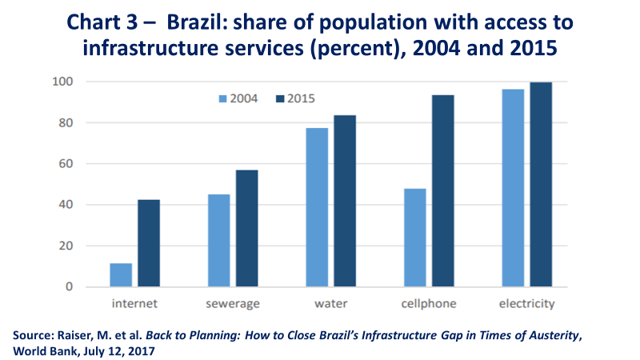 Public infrastructure spending was squeezed as current public spending grew by 2% above GDP and primary government spending as a proportion of GDP rose from 22% in 1991 to 36% in 2014. Although public spending has stabilized since 2015 as a proportion of GDP - and since 2017 being subject to a constitutionally established absolute ceiling in real terms - the continued expansion of mandatory current spending has kept the fiscal space available for public infrastructure investments shrinking. Brazil's “public sector obesity” has aggravated its “productivity anemia”.

The fall in public investment was not sufficiently offset by private investments in infrastructure - unlike other countries in the region, such as Chile and Colombia, as noted in the World Bank staff report. In addition, the public sector remained the source of more than 70% of this financing, depending, therefore, on prevailing fiscal conditions in the country (Chat 2 right side on transport).

The inevitable continuation of fiscal austerity in the future ahead reinforces its need to be accompanied by building new pillars of long-term financing, while reconfiguring the regulatory and operational framework to increase the participation of private investment in infrastructure. In addition to the decline in real interest rates achieved in the recent period, it will be necessary to maintain the pace of structural reforms that have gradually improved the business environment and the costs of financial intermediation. On the other hand, as much as the presence of the private sector is required to expand, investment and private management in infrastructure will remain complementary - not perfect substitutes - to the public sector.

In addition to the difficulties in terms of amounts of public infrastructure spending, in a context of downward rigidity of other expenditure items, there is the qualitative problem of its “inefficiency”. The shortfall is compounded by quality problems in such low investments, as pointed out in the World Bank report. It is important to improve the result of the part that will continue to be the responsibility of the public sector, because the whole will depend on it.

Take, for example, the deficiencies in resource allocation and operation in the transport and water and sanitation sectors, which we have already highlighted as particularly under-invested. In transport, the World Bank report estimates that the combination of a multimodal system that favors road transport with operating inefficiencies in the federal highway system entails economic and environmental costs equivalent to 1.4% of GDP, or 2.2 times the current annual investment in the sector. In turn, operating inefficiencies in water supply have been around 0.7% of GDP, or more than three times the current annual investments in sanitation. The approval of a new regulatory framework for sanitation, underway in Congress, must bring good news for the sector.

There has been a strong incidence of project-level inefficiencies, as well as irregularities in the different stages of its cycle. There is need to reinforce upstream planning capacity, raise standards for basic engineering projects, improve risk identification and mitigation processes in the preparatory phase of projects - to avoid disruptions during implementation - strengthen economic and financial viability requirements and, not least, increase the effectiveness of bids.

But the biggest challenge may lie in some political roots of deficiencies in infrastructure investments. The way in which political coalitions have traditionally been built and campaigns funded in the country's recent past has led to the fragmentation of budget allocations for capital investments and the frequent selection of poorly designed projects. In the same vein, the use of capital transfers and assignments to maintain fragile political coalitions within a framework of party fragmentation has undermined project planning, evaluation, selection, supervision and assurance.

Brazilian prosperity will depend on more and better investment in infrastructure, in a context of fiscal austerity. To this end, it is essential to improve the quality of public intervention and to follow the structural reform agenda.

2020 may represent a turning point

Basic interest rates are at record-low levels. Brazil’s risk spreads have fallen to levels unseen in 9 years. There was a capital outflow of US$44.7 billion in 2019, but that mostly reflected the unwinding of the interest rate premium paid in domestic debt, as well as prepayment of foreign debt by Brazilian corporates.

Funding to Brazilian non-financial corporates has returned to pre-recession levels, now with a strong rise in corporate debt securities and equities, mostly on local investors' base, as foreign capital left as a result of corporate debt unwinding and low interest rate premium yield from public debt. Domestic capital markets have started to compensate for the downfall in subsidized credit from the Brazilian Social and Economic Development Bank (BNDES). Furthermore, domestic bank lending to businesses started to leave behind its sluggishness during the crisis.

The new fiscal-monetary policy mix has the potential to bear fruit in terms of more private investment-led, less public sector-led new growth. Foreign capital inflows may return with a new profile accordingly. Funding infrastructure investments and concession projects may well be the new way to get returns in Brazil, rather than juicy interest rates paid by government debt.

* Text prepared as a background note for Mr. Canuto’s participation at the 2020 BRAZIL BUSINESS FORUM.

Follow Otaviano Canuto and get email alerts
+
Add a comment
Disagree with this article? Submit your own.
To report a factual error in this article, click here.
Your feedback matters to us!