AUD/JPY is coasting at the midpoint of its short- to medium-term trading range.

However, the pair's short-term interest rate differential continues to tumble, and this author believes there is more room for it to fall.

With bushfires sadly continuing to rage in Australia, the probability that the Reserve Bank of Australia cutting its short-term rate to support the economy is increasing (which could lead to even further downside in the interest rate differential as priced by bond markets). Meanwhile, China's growth is slowing, and all of Australia's main export partners are in late-cycle economic phases.

Both on a long-term and short-term basis, we can see that there are growing risks of downside for AUD/JPY. Therefore, going forward, we should avoid being long AUD/JPY and continue to search for strategic short opportunities. At present, it would appear that there is a prospect for the pair to find 73.75 in the near term.

The AUD/JPY currency pair, which expresses the value of the Australian dollar in terms of the Japanese yen, is a popular pair by virtue of its efficacy in providing traders and investors with a signal as to where global markets may be headed.

The Australian dollar is traditionally recognized as a "commodity currency", a term which accounts for two things: the main factor being, in this case, the large commodity export exposures of Australia. Per the website of the Observatory of Economic Complexity, the country's top exports include iron ore (20% of exports), coal briquettes (19%), gold (12%), petroleum gas (8.3%) and many (albeit lesser) others, including wheat, copper, zinc and crude oil.

Per the OEC website (as referenced above), Australia's main export partners are (in order of size): China ($85 billion), Japan ($34.6 billion), South Korea ($18 billion), India ($14.8 billion) and Hong Kong ($14.2 billion). The significant Chinese exposure that Australia's economy has leaves it greatly exposed to global economic slowdowns. China's (reported) growth rate slowed to 6.0% in the third quarter of 2019, as reported recently, while Fidelity's business cycle analysis goes as far as placing China in a contractionary phase. 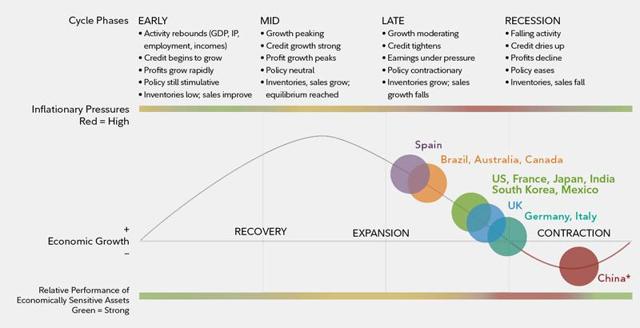 It is interesting that Australia is placed within the late-cycle phase per Fidelity's chart, as above. With Australia's growth rate more likely to (continue to stall), and with China, Japan, South Korea and India all either in a late-cycle or contractionary phase (i.e., the largest purchasers of Australian exports), the Australian dollar would most probably be positioned for (continued) downside.

Meanwhile, while Japan is also late-cycle, interestingly by virtue of the country's stable and positive current account surplus, relative political stability and modest but nevertheless positive economic growth, plus the liquidity of the Japanese yen, make the yen a well-recognized safe haven currency.

Therefore, a weakening of the Australian dollar signals risk-off activity (i.e., sentiment is changing against the taking of investment risk; typical risk-off moves include U.S. equity corrections), and a stronger yen signals much of the same. When AUD/JPY is stable or rising, the pair is moving in a pro-risk fashion. When AUD falls and JPY strengthens, the AUD/JPY pair can sometimes signal (in these instances) sharply negative risk-off signals.

This author believes that there is potential for this in the coming future on the basis that we can also look to assess the chance of AUD/JPY downside using trading ranges and bond market moves. In the chart below, I have drawn areas of likely support and resistance at equidistant levels (the distance between each area is equal). Black lines have been added to draw attention to midpoints, while the blue line is the most important resistance area at present.

Notice that the pair has settled within a range between almost 81.00 at the top (almost reached in April 2019) and around 70.00-71.00 (the lows of August to September 2019). The pair is now trading in the middle of this range, and the question is whether we now sustained upside or downside.

Now, let us update the chart above with the difference between one-year Australian bond yields and one-year Japanese bond yields. The bond market can provide us with an indication as to the likely future of the carrying value of a currency pair; the higher the value (and ideally, the more positive the value), the more attractive it is to buy the pair. Positive-carry pairs typically enjoy a natural upside bias, as leveraged traders can book interest income simply by holding these pairs.

However, at times, the prospect of downside (when risk-off moves become increasingly probable) can surely outweigh the perceived benefits of holding positive-carry currency pairs, and this can send positive-carry pairs tumbling downward.

As one can clearly see from the chart above, the short-term interest rate differential for AUD/JPY (per the red line, set against the far-right y-axis) has tumbled significantly.

Usually, both yield differentials and FX spot prices correlated positively and strongly. When divergences occur, the bond market is usually to be trusted (notice, for example, in the above chart, the yield differential has been falling for some time in spite of the occasional upside seen per AUD/JPY spot prices; these spikes are often short-lived).

Most recently, the divergence has been growing. I also noted this occurring in the USD/JPY pair in a recent article of mine. It does appear to me that there is a growing risk of downside in several risk-on pairs, and with AUD/JPY now meeting with resistance at the midpoint of its medium-term trading range, I would favor the bond market's signal at this juncture.

This is not to mention the fact that Australia is facing extreme chaos with respect to bushfires that are raging across the region; these events, one might assume, will strongly encourage the Reserve Bank of Australia to cut rates (even if modestly) in its next monetary policy meeting, which is set for February 4, 2020. The current short-term rate of +0.75% compares to the Bank of Japan's short-term rate of negative -0.10%.

The sum of these rates, in terms of AUD/JPY, would imply a positive-carry interest rate spread of +0.85% (i.e., 75 basis points minus "negative" 10 basis points). This compares to the bond market's pricing, as indicated in the chart above, is safely over 90 basis points. Therefore, despite the yield differential tumbling, there is more room for this spread to fall, especially if the Reserve Bank of Australia does indeed cut in its next meeting.

In short, this author remains bearish on the AUD/JPY pair, and we could see a risk-off move to the 73.75 level in the near term given the factors outlined heretofore.