Ford's stock has been in a downward trajectory over the past few years.

There are several catalysts such as the introduction of electric vehicles and autonomous vehicle commercialization that could ignite growth.

I'm primarily a value-focused investor who generally looks for opportunities that present themselves because the stock has generally not received much coverage from Wall Street. However, I occasionally happen upon opportunities in well-followed stocks that I believe represent an asymmetric risk/reward opportunity. The most recent example of this is Ford Motor Company (F).

My Investing History With Ford

I was previously invested in F around 2013 but sold off this stock around 2015 when I was liquidating my stock portfolios to pay for law school. In hindsight, I was lucky to sell F at this time, as the stock has been in a significant downward trend since that time. Although I was lucky selling F at this time, I was also unlucky in that I had to liquidate my holdings in other stocks, including Facebook (FB) at around $100 per share and my call options in FB that still had time before expiration.

With the recent selloff and launch of electric vehicles, I re-evaluated F and decided to invest again. It currently represents my fourth largest investment in my portfolio and my cost basis is $8.87.

With Ford's stock price trading in a downward trajectory for the past few years, without its business fundamentals deteriorating, I believe Ford presents a great value-based investing opportunity. On a price-to-book-value basis, Ford is trading at a very low multiple of just about its book value. 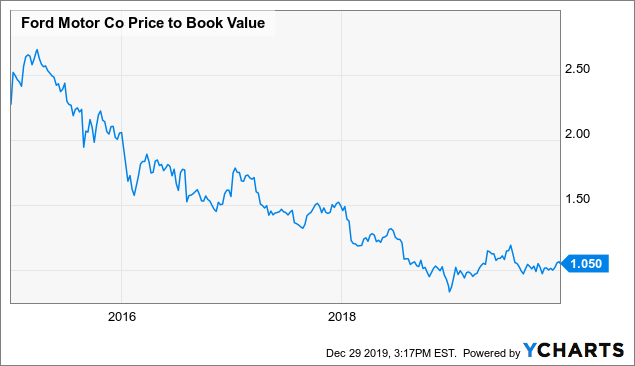 Moreover, Ford trades at a very conservative ~5.17x its annual free cash flow. Ford has announced that it will spend roughly $11 billion over the next 3-5 years to restructure its business, including exiting businesses beyond North American sedans so that will impact cash flow to some degree.

However, Ford intended to spend $3.5 billion of that in 2019 so roughly a third of that cash flow impact will already be included as we enter 2020. As part of this restructuring, Ford has laid off and bought out many employees which will save roughly $600 million annually. Although this restructuring plan is crimping profits and cash flow in the short term, Ford will see a benefit from this in the long term, as it positions its business into a lean enterprise. 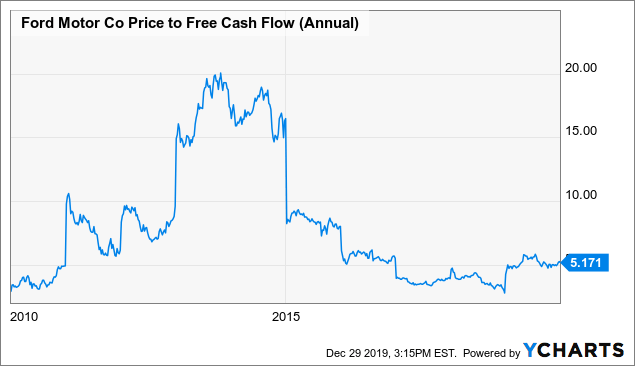 Part of this restructuring includes re-tooling old facilities for new cars, such as its launch of electric vehicles. The Mustang Mach-E First Edition quickly sold out in the U.S. after Ford announced it. Although Ford did not report the number it sold, it did note that it would only produce around 50,000 Mach-Es overall in its first year of production due to battery supply issues. This number is still well behind Tesla's (TSLA) production, which just delivered 97,000 EVs last quarter, but is a great start for Ford. 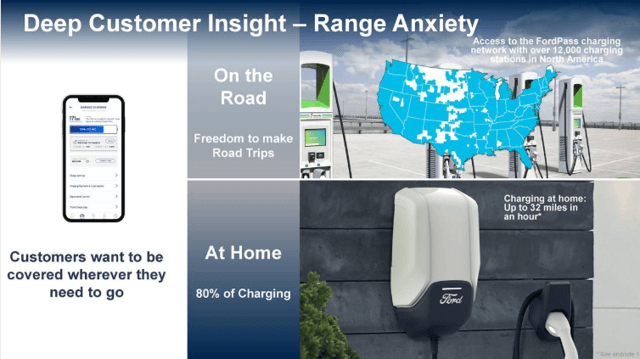 Ford has prudently been investing in autonomous vehicles for several years through several different avenues. Ford and Volkswagen AG (OTCPK:VLKAF) partnered in a self-driving venture called Argo AI, in a deal that valued the startup at $7 billion.

Ford has been expanding its autonomous vehicles businesses and has developed mobility services such as Spin, which has a footprint in 60 markets and growing and has given over 3 million riders year to date. Further, Ford announced that Austin will be Ford's third market for autonomous vehicle services and remains focused on beginning to commercialize its self-driving service in 2021 and will scale it up once they're able to remove the safety driver from the vehicle. 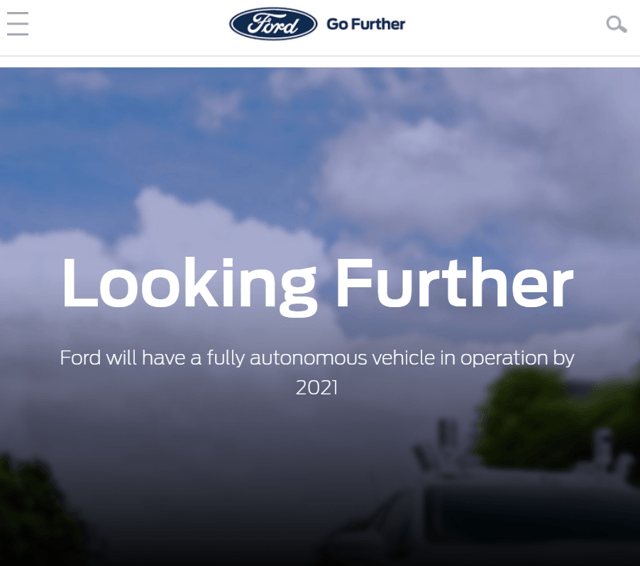 Once Ford is able to commercialize this business, I see huge opportunities for growth. Right now, Uber (NYSE:UBER) and Lyft (LYFT) generate billions of dollars by connecting drivers and riders. Outside of providing platforms for these connections to be made, Uber and Lyft do not provide much value.

Once fully autonomous vehicles are available, car manufacturers will be able to provide taxi services at a cheaper rate than Uber and Lyft can provide with their current offerings. Surely, a platform will be required to connect these self-driving taxis with riders, but it remains to be seen which platform that will be. Perhaps one car manufacturer (or a few will partner together) to make a platform for this. Or perhaps Uber and Lyft will partner with car manufacturers to split the revenue derived from these riders. In any case, car manufacturers are set to benefit greatly from autonomous vehicles. Moreover, logistics companies such as FedEx (NYSE:FDX) and UPS (UPS) may lose some of their business, as self-driving taxis will also be able to provide delivery services.

Ford has been having numerous issues in China. Ford had a break-down with its joint venture partners and dealers and Ford's sales in China have fallen off a cliff. In 2016, Ford's sales in China peaked with sales of more than 1.27 million vehicles. Sales began to decline in 2017, with 1.19 million vehicles, around 750,000 vehicles in 2018, and, as of its third quarter, Ford has delivered about 421,000 vehicles. Clearly, Ford has been experiencing some disappointing results in China.

To turn things around in China, Ford announced a China 2.0 Plan. To revitalize its sales in China, Ford plans to launch more than 30 new models over the next three years, of which more than one third will be electric vehicles. Ford is also prudently tailoring its products more towards Chinese consumers' preferences and needs. Ford is also deepening its partnerships with its JV partners, Changan Automobile and Jiangling Motors Corporation Group (OTC:JGLMY) and is working with Chinese tech companies, including Alibaba (NYSE:BABA), Baidu (NASDAQ:BIDU), China Unicom (NYSE:CHU) and iQIYI (NASDAQ:IQ) to accelerate its smart vehicle development.

Ford appears to be seeing some improvements in China. In December, Ford announced that it expects its full year 2019 loss in China before interest and taxes are factored in to be about half of what it was a year ago. Ford said that it expects to cut down its losses in China before interest and taxes by almost 50% again in 2020 and expects further improvement in 2021.

When you compare Ford to other car manufacturers, such as General Motors (GM), Toyota Motor Corp. (TM) or Honda Motor Co. Ltd. (HMC), it is apparent that Ford provides a value on a comparative basis. On a price-to-sales ratio, Ford trades at a ratio below each company in its peer group, besides Nissan Motor Co. Ltd. (OTCPK:NSANY) which trades right around Ford's level. Although not a fair comparison since TSLA's sales are increasing at a much faster pace, Ford trades at a price-to-sales ratio of nearly 1/10th TSLA's. 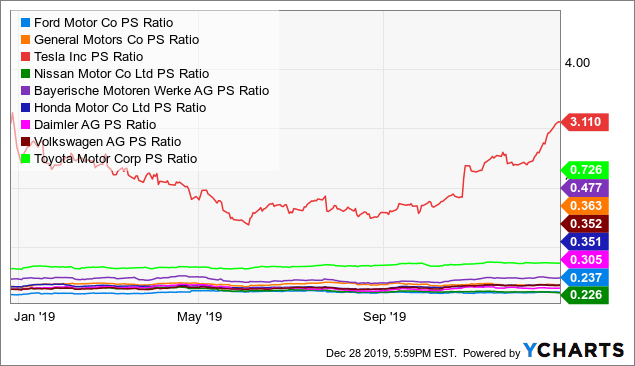 Another reason I'm a fan of holding Ford is that it pays a generous dividend, currently yielding 6.5%. Since dividends paid by Ford are known as qualified dividends, they are taxed at capital gains tax rates that are lower than the income tax rates on unqualified, or ordinary dividends.

Investors may worry that Ford will not be able to maintain this robust dividend, however, when looking at Ford's balance sheet, my worry is quashed. Ford has been building up a sizable cash position, which stands at over $20 billion right now.

With the current dividend rate, Ford is paying out roughly $3 billion per year. Moreover, Ford is currently generating around $9 billion per year in free cash flow. Even if we go into a recession and Ford's free cash flow is stymied to some degree, I believe Ford has the balance sheet to weather this recession and maintain its dividend. This is especially true amid Ford's recent restructuring and layoffs. 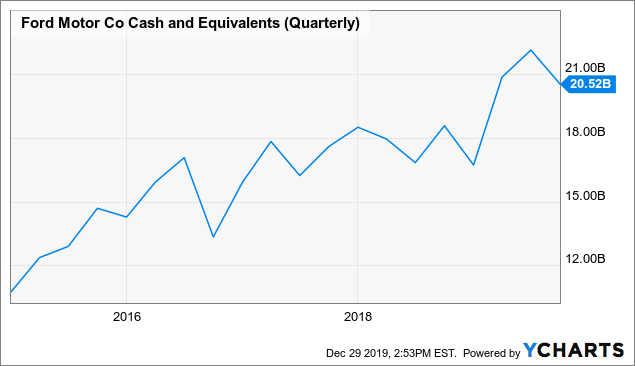 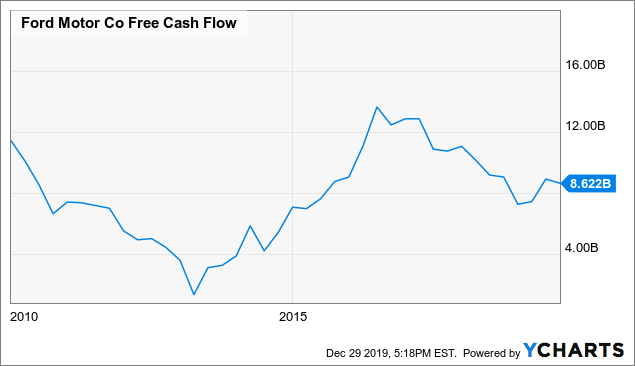 Ford has faced some challenges with shifting consumer demand and its struggles in China in the past few years. However, Ford's business fundamentals and balance sheet remain strong and Ford is a lean enterprise that is built to weather a recession and maintain its robust dividend, which currently yields 6.5%. Moreover, there are several catalysts that could ignite growth such as its launch of electric vehicles and commercialization of its autonomous vehicles. I believe Ford is a prudent addition to a portfolio at the current trading level.

This article was originally published on my exclusive marketplace service, Invest with a Stacked Deck.

Follow Jeffrey Himelson and get email alerts
+
Add a comment
Disagree with this article? Submit your own.
To report a factual error in this article, click here.
Your feedback matters to us!