Ross Stores is a consistent grower with room to run. 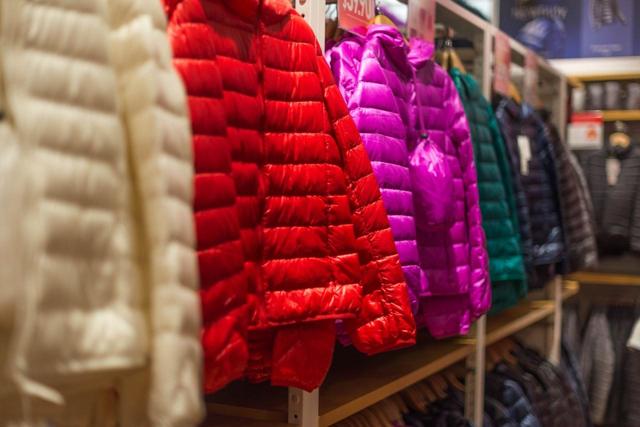 Many words have been written regarding the death of brick and mortar retail due to Amazon (AMZN). While that may be true for some retailers, others with targeted niches have done well for themselves. Businesses like Costco (COST), Walmart (WMT), and Target (TGT) have done just fine over the last decade and I believe that Ross Stores (ROST) falls into that same boat.

Ross Stores sells discount apparel and home goods through the Ross Dress For Less and dd's Discounts stores. The value add for consumers is that they are paying significantly less than department stores for essentially the same goods.

My primary investment strategy is to identify quality companies with a history of paying and growing their dividends payments that I believe will continue to do so in the future. 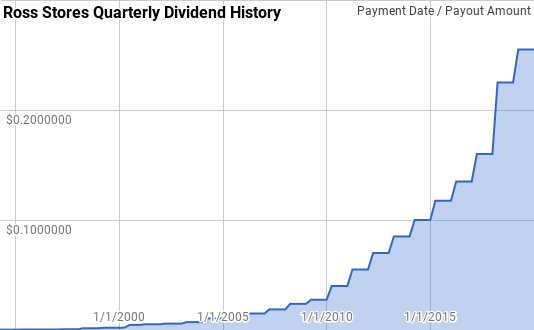 *An interactive version of this chart is available here.

Every year starting in 1995 Ross Stores has been rewarding shareholders with higher dividend payments. That's 26 consecutive years of dividend increases which gives them the title of Dividend Champion.

Last year's dividend increase came in at just 13.3% and that was one of the lowest growth rates Ross has provided during their streak. Historically speaking, Ross Stores has been an excellent dividend grower.

*An interactive chart of the information presented in the table can be found here.

Companies have two ways to grow their dividend: (1) growth of the underlying business and (2) increase their payout ratio. The most sustainable growth is to see growth of the business support a higher dividend. Growth through a rising payout ratio will eventually lead to the risk of a dividend being cut if management is too aggressive and the business goes through a rough patch.

My investment strategy revolves around investing in businesses that I believe have a moat around their business as well as a history of paying and growing their dividend payments to shareholders. One of the ways that I use to identify if the first goal is being met is to look at the financials to determine the quality and strength of the business.

My profitability metric of choice is the free cash flow return on invested capital, "FCF ROIC". The FCF ROIC represents the annual cash return that the business is generating based on the capital invested in the business.

Ross has managed some truly amazing FCF ROIC results. Over the last decade, FCF ROIC has averaged 34.7%, and for the last five years, the average is 36.9%. There's been some significant variance in Ross' FCF ROIC largely due to the pace of growth out of cash flow changing; however, with a minimum level of 21.9%, that's still more than adequate.

I like to invest in businesses that use their cash flows in ways that align with shareholders. That means that the first priority is to re-invest in the business to both maintain and expand with capital expenditures. If there's remaining cash flow, then I expect management to send some of it to owners via dividends. Any remaining cash flow should go to debt reduction, acquisitions, building a cash buffer or share buybacks.

To understand how Ross Stores uses its free cash flow, I calculate three variations of the metric, defined below:

High quality businesses and management teams will show positive FCFaDB in most years. I'm not concerned about any given year being in the red; rather, it's the trend over the longer term that I focus on. A positive FCFaDB means that the business generates ample cash flow from operations to maintain and grow the business, pay out some of the cash profits to owners as well as have the option to improve the balance sheet, make acquisitions or buyback shares. 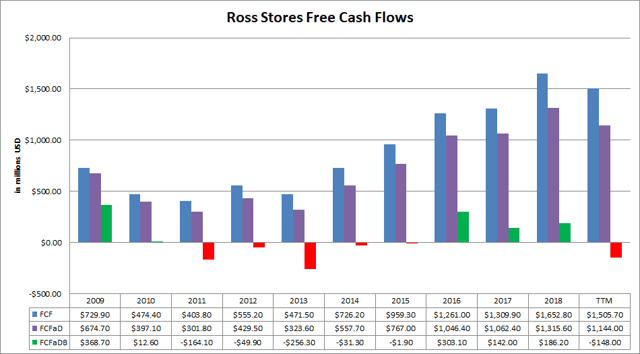 As we saw above, Ross Stores has generated positive FCF every year over the last decade. That positive FCF is what has allowed management to return cash to shareholders via dividends.

In total, Ross has generated $8.54B in FCF over the last decade and paid out $1.67B in dividends over that time. Ross Stores has managed positive FCFaD in every year as well.

Management has spent a total of $6.37B on share repurchases over that time. That puts the cumulative FCFaDB at $0.51B. Ross Stores has shown negative FCFaDB in half of the years as well as the TTM period. 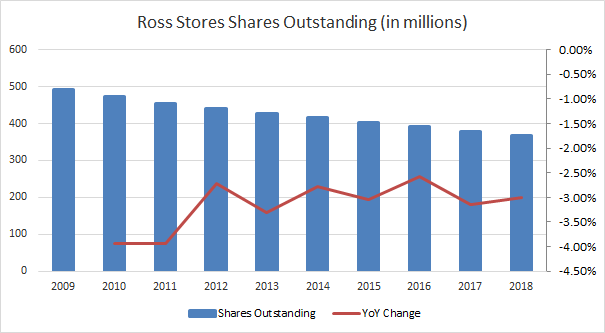 The following table shows the cash used for shareholders which includes capital expenditures, dividends and share repurchases. I've further broken down the cash into the funding source, i.e., whether it is supported by cash flow from the business or other funding was needed. 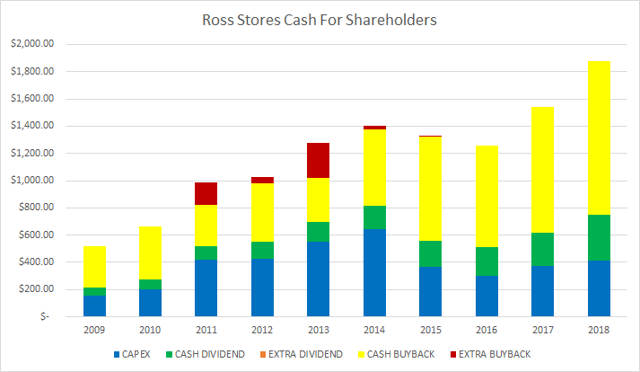 Despite the five years and the TTM period not having operating cash flow fully support the capital allocation plans from Ross' management, I'm not concerned at all. That's because when you look at this in conjunction with the balance sheet, the other funding source was cash held on the balance sheet as opposed to debt. Management has maintained a positive net debt position, i.e., cash > total debt, every year over the last decade.

As such, Ross Stores' debt to capitalization ratio is very attractive. Over the last decade, it's ranged from 7% to 15% with an average of 11%. With a current net cash position, the debt that is held on the balance is of no worry. 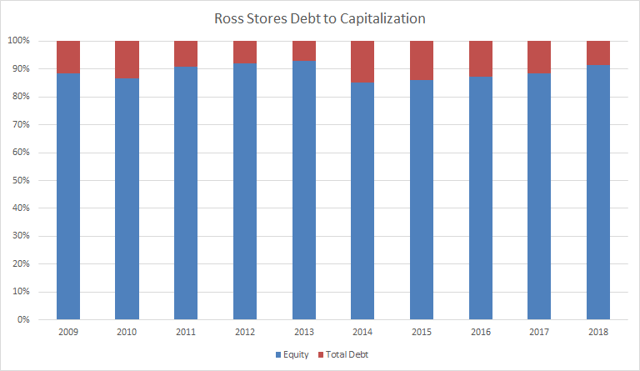 One method that I use to value a potential investment is the minimum acceptable rate of return, "MARR", analysis. A MARR analysis entails estimating the future earnings and dividends that a business will generate, applying a reasonable expected multiple on those earnings and then determining whether the expected return exceeds your threshold for investment.

The following table shows the potential internal rates of return that an investment in Ross Stores could provide if the assumptions laid out above play out. Returns include dividends taken in cash and are calculated assuming a purchase price of $120.72, Friday's closing price. Returns are run through the end of calendar year 2024, "5 Year", and calendar year 2029, "10 Year".

Alternatively, I want to know what price I would need to purchase shares in order to generate the returns I desire from my investments. My typical investment threshold is 10%. I will also examine the price targets based on 8%, the earnings growth return, and 11% which includes 25% undervaluation normalizing over 10 years or ~2.3% per annualized. 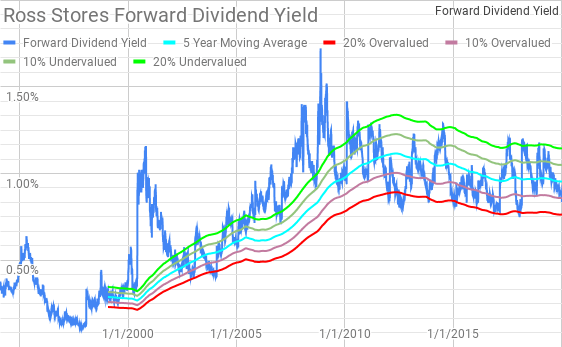 *An interactive version of this chart is available here.

I believe that Ross Stores is one of the better businesses in the retail space with their discount name brand clothing as well as home furnishings. As a discount retailer, Ross is set to benefit from a trade down from the consumer as they try to make their dollars stretch further in the event of a recession.

Couple that with the large potential growth in store count under the namesake Ross Stores brand as well as dd's Discounts stores.

Ross Stores' management is also top notch and takes a conservative approach to growing their footprint. The business carries a net cash position, cash less total debt, and grows the store count through cash flows generated by the business. It's a more measured approach than other consumer facing businesses, but it's one that's served them well.

Dividend yield theory suggests a fair value range for Ross' shares between $97 and $119, implying that shares are on the upper end of fair value with current prices above $120. Of course, Ross is due for another dividend increase to be announced in early March. An increase to $0.28, ~9.8% increase, would push the fair value range to $106 to $130.

My fair value range based on the MARR analysis is $89 to $110 using the earnings growth justified return target of ~8%.

Ross Stores is trading at or near decade highs based on TTM P/E and EV/EBITDA which makes it hard to justify purchasing shares. I would be interested in adding more shares of Ross in the low $110s and preferably <$100. For the time being, I will remain patient and wait for better opportunities.

Disclosure: I am/we are long ROST. I wrote this article myself, and it expresses my own opinions. I am not receiving compensation for it (other than from Seeking Alpha). I have no business relationship with any company whose stock is mentioned in this article.

Additional disclosure: I am not a financial professional. Please consult an investment advisor and do your own due diligence prior to investing. Investing involves risks. All thoughts/ideas presented in this article are the opinions of the author and should not be taken as investment advice.

Follow Passive Income Pursuit and get email alerts
+
Add a comment
Disagree with this article? Submit your own.
To report a factual error in this article, click here.
Your feedback matters to us!