The stock has rallied sharply since last May's low and that rally has put the stock in overbought territory.

Earnings and revenue growth have been a little below average over the last few years, but did show improvement in the third quarter.

Sentiment toward the stock is rather optimistic.

Chip manufacturer Taiwan Semiconductor (TSM) is set to get the tech earnings season rolling when it reports fourth quarter results on Thursday before the open. Analysts expect the company to earn $0.71 per share for the quarter. If the estimate is accurate, it would mark a 12.7% increase from the $0.63 per share the company earned in the fourth quarter of 2018. The revenue estimate for the quarter is $10.46 billion and that is 11.3% higher than 2018.

Over the last few years, Taiwan Semi has seen earnings grow somewhat slowly. The annual EPS growth rate for the last three years has been 1%, but the company did see earnings jump 13% in the third quarter. For 2019 as a whole, analysts expect earnings to decline by 1%.

Revenue has grown at a rate of 5% per year over the last three years and it increased by 11% for the third quarter. The expectations for the year are an increase of 3.1%.

The company has strong management efficiency measurements with a return on equity of 22% and a profit margin of 38.5%. The stock is currently trading at a P/E ratio of 26.93 with a forward P/E of 21.68.

One thing that Taiwan Semi has over many other chip companies is that it pays a pretty decent dividend. At present, the yield on that dividend is 4.1%.

The semiconductor industry has struggled a little in the last few years in terms of earnings and revenue growth, so Taiwan Semiconductor isn’t alone in its struggles. The trade war between the U.S. and China has certainly had an impact on the industry as a whole as the two countries have tried to sort through their issues. With the first round of agreements set to be signed this week, the winners and losers in the tech sector should start to sort themselves out.

The Stock Is Tremendously Overbought At This Time

Turning our attention to the technical analysis for Taiwan Semiconductor, we see that the stock is tremendously overbought at this time. After bottoming around $35.50 back in May, the stock has been on a tremendous run and is trading above the $60 level now. 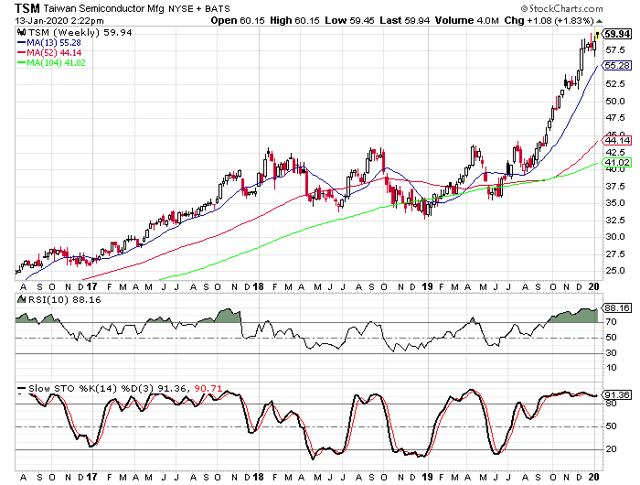 Obviously, I have some concerns about the huge run-up that has been going on for the last seven months. One concern is that with the stock charging higher at such a pace, the expectations could be built into the stock and the company will have a hard time impressing investors enough.

Sentiment Is Skewed To The Optimistic Side

Looking at the sentiment indicators for Taiwan Semiconductor, we see that investors and analysts alike seem to be pretty optimistic about the stock’s future. There are 29 analysts covering the stock at this time and 23 of them rank the stock as a “buy.” There are four “hold” ratings and two “sell” ratings. This puts the buy percentage at 79.3% and that is above average and indicates above-average optimism. 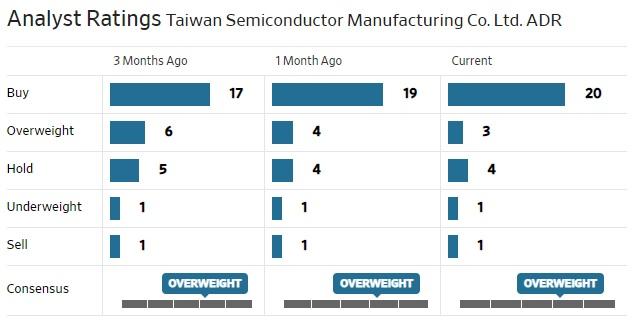 The short interest ratio is at 1.5 at this time and that is also indicative of greater optimism than the average stock. The average short interest ratio is in the neighborhood of 3.0. The number of shares sold short dropped from 14.58 million to 10.06 million during the most recent reporting period and that is a sign that the optimism is growing at this time. Of course, with the tremendous rally in the last few months, short-sellers have been forced to cover.

Looking at the put/call ratio, it is only slightly lower than average and reflects slightly more optimism than the average stock. There are 101,546 puts open at this time and 109,504 calls open. This puts the ratio at 0.927.

My Overall Take On Taiwan Semiconductor

The fundamentals for Taiwan Semiconductor are good, but not great. The price-performance of the stock has been incredible and the Relative Strength indicator from Investor’s Business Daily is a 93. That means the stock has performed better than 93% of all other stocks in IBD’s database over the past year.

My concerns come down to how overbought the stock is and how optimistic the sentiment appears to be at this time. To me it seems like the stock is performing better than the company. What I mean by that is that the stock price has been a top performer, but the company itself has struggled to get the earnings growth and revenue growth that you want to see from a stock that has rallied like Taiwan Semi has.

I give the stock a neutral rating at this point in time. I think the hurdle for earnings is just going to be too high for the stock to see much of a jump after the report. The company has come up short on its EPS estimate in three of the last four quarters, but obviously, that hasn’t caused much of a problem for the stock. Both the October and July reports missed slightly, but in both cases, there was only a small hiccup in the rally.

If you would like to learn more about protecting and growing your portfolio in all market environments, please consider joining The Hedged Alpha Strategy.

One or two option recommendations per month

A weekly update with my views on the market, events to keep an eye on, and updates on active recommendations

Follow Rick Pendergraft and get email alerts
+
Add a comment
Disagree with this article? Submit your own.
To report a factual error in this article, click here.
Your feedback matters to us!