Bank stocks are rallying, but investors need to watch the 2-10 Year Treasury as it will drive NIM growth in the coming months.

Although net interest income might take a hit in Q4, Bank of America's trading income should perform well.

Also, any geopolitical developments and dovish response by the Fed will likely drive yields in the first half of 2020.

Bank stocks have rallied creating multi-year highs for some and all-time highs for others. For those who have been long stocks, you're being rewarded.

Below we can see that bank stocks have jumped since November 2018. I stripped out the December-18 correction and the January-2019 rally to provide a smoother, more accurate reflection of the market.

In this article, we'll explore what's likely to impact Bank of America in 2020, including the upcoming Q4 earnings report. Even if you're invested in other banks, this analysis should help you since the overall drivers in the market will likely be the same for all banks.

It's a challenging environment with low yields and anemic economic growth, which could lead to a short-term pullback in many bank stocks.

However, there are some bright spots that should help BofA power through the low-yield storm. As a result, on the other side of any type of economic slowdown, the bank looks like it should perform quite well in the long term. However, in the short term, including Q4 earnings, the market may not be so kind.

What Can Impact Your Bank Stock Investment

The trade war between the U.S. and China has reached a milestone with the Phase One completion. However, the original tariffs will likely remain in place, and economic growth has taken a hit. Business investment has contracted or slowed over the last few quarters as compared to 2018. Conversely, consumer spending remains strong.

The Fed rate cuts may have prevented a recession, or at the very least, a dramatic slowdown in growth. However, Mr. Powell has stated that the contraction in business investment was a key reason for the rate cuts. Until that improves, expect the Fed to remain dovish to neutral.

The bond market is rallying, meaning prices are rising while yields are falling. Investors have gobbled up bonds due to fear and uncertainty in the U.S. and the global economy. The flight-to-safety trade has not unwound yet, despite all-time highs in some U.S. equity markets.

Economic growth forecasts show that in Q4, the U.S. is expected to grow by 2.3% according to the Federal Reserve Bank of Atlanta's GDPNow model.

Please bear in mind that the Fed Atlanta typically revises its forecasts as more information comes available. Nevertheless, growth should be at or near 2% with most of the growth coming from consumer and government spending.

Also, the GDPNow forecast tells me that the Fed believes the economy – along with the U.S. consumer – is fairly solid. However, in 2020, business investment in the U.S. needs to pick up for growth to remain consistent since the consumer's holiday spending spree is now behind us.

Approximately 50% of Bank of America's total revenue of ~$22 billion comes from net interest income. The profit from this income – called net interest margin – is predominately from the spread or rates it charges for loans and credit cards versus the interest the bank pays to depositors. On variable-rate credit products like credit cards and credit lines, banks can charge a higher rate as interest rates rise in the overall market.

The 2-year Treasury yield is typically driven by the Federal Reserve's adjustments to short-term rates. The rate cuts by the Fed, which were a precautionary measure to hedge against any trade-war fallout, pushed the 2-year yield lower by nearly 50% (or ~140 basis points) since late last year.

The 10-year Treasury yield is typically driven by the market – reflecting economic growth and inflation – but it also reflects the nervousness in the global markets as capital rushes into bonds for safety. The result is the 10-year yield falling from 3% to approximately 1.70% since late last year.

The damage from slow growth, a trade war, and Fed rate cuts is reflected in the 2-10 year Treasury spread. The narrower the spread, the lower the profit that banks earn from credit products.

This divergence between the 2-10 year spread and bank stocks can't go on forever. Something's gotta give, which could include a jump in the 10-year yield, boosting loan spreads and justifying the current stock prices. Or, banks have to correct lower to reflect the economic fundamentals. 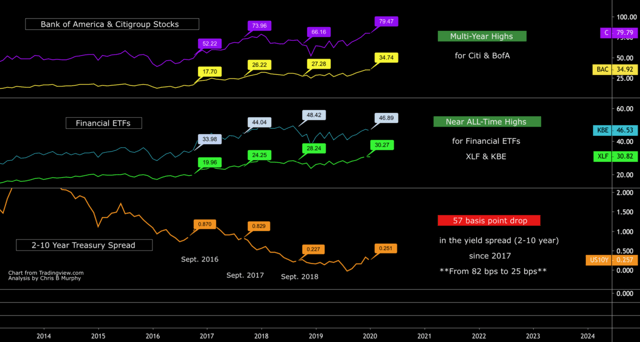 As a result, there's likely to be more pressure on bank executive management teams to cut overhead costs and generate more revenue with fewer resources. This is why investors need to pick bank stocks with diverse revenue streams and that are actively cross-selling products within all the divisions. Also, banks that are investing in digital banking should see better margins in the long term since each new additional dollar in revenue will have fewer overhead costs associated with it. Bank of America does all of this, which is why it's a best-of-breed bank along with JPMorgan.

Below is the NIM for the banking industry broken out by the type of lender as of September, per the FDIC or the Federal Deposit Insurance Corporation. Although September is not current data per se, it's the most recent data from the FDIC, and the NIMs – as well as interest rates – haven't changed all that much since then.

Bank of America's NIM is listed below for Q3.

We can see that net interest income has remained approximately $12.3 billion per quarter while the margins are declining (see below). 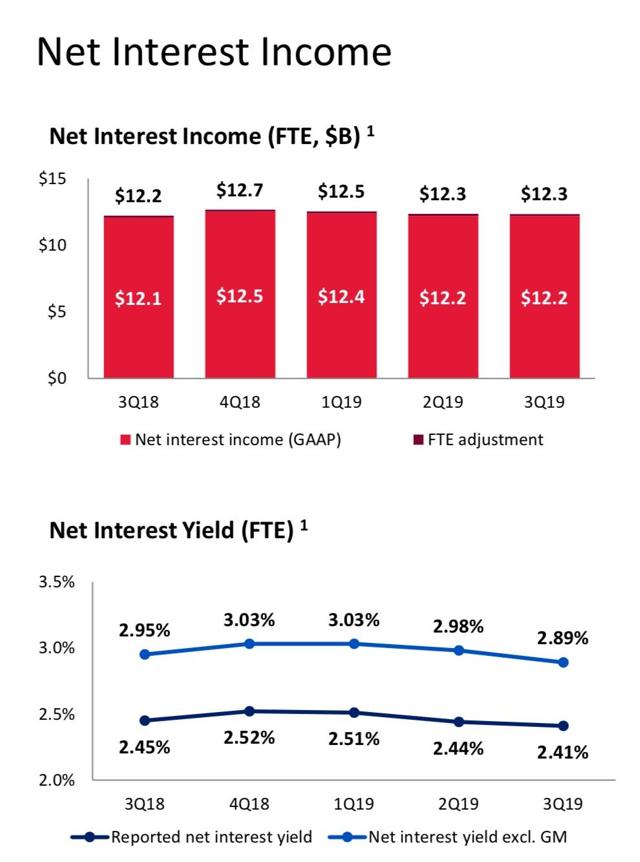 Graphs and data from Bank of America Q3 earnings.

I'm expecting BofA's net interest income to fall slightly – perhaps $300 to $400 million – in Q4 due to lower commercial loan growth and narrower loan spreads. However, any decline would be quickly reversed if the 10-year yield jumps back on top of 2%, which should help boost profitability for existing variable-rate credit products.

The number to beat is $12.3 billion from Q4-18, but we can see the average has been $12.2 billion (in red below) for the past few quarters. Of course, the bank can offset any declines in net interest income by generating new borrowing clients.

Table by Chris B Murphy and data from seekingalpha.com.

For example, if the bank's consumer division performs well and credit card growth continues, the margins are far wider and more profitable. If you recall, we saw this play out in the FDIC graph above showing the 10.70% margin for consumer credit cards versus 3.5% for commercial products in the industry.

In other words, the credit mix will be important in the coming months for bank profitability – and not just for Bank of America. For example, mortgages will likely decline in the winter months while commercial credit growth might slow with the lack of CAPEX spending.

As a result, there could be a shift to consumer-based products like credit cards and personal loans – which have wider margins. However, those wider margins come with higher default risk, and we must carefully monitor nonperforming loans and charge-offs.

Thankfully, NPLs and charge offs have been declining for Bank of America, which shows how well the bank is managing its balance sheet risk. 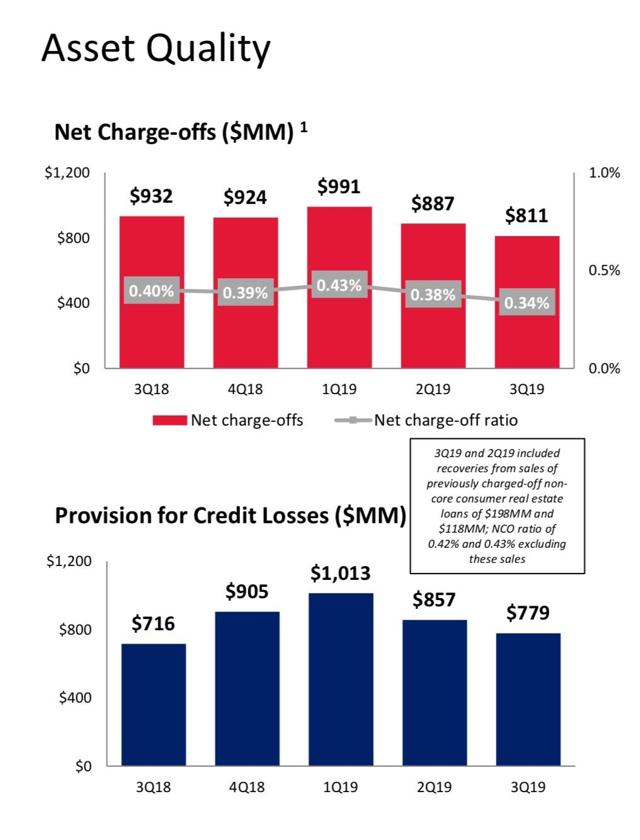 Graphs and data from Bank of America Q3 earnings.

However, please monitor these metrics in Q4 and through the early part of 2020 for any changes.

BofA should see a bump higher in trading activity income for Q4 2019, considering the past quarter was more market-friendly than the correction in Q4 2018. Although the rise should be reflected in other banks as well, such as JPMorgan and Citigroup.

Even if BofA produces slightly above its quarterly average of $1.9 billion (highlighted in red below), the bank should see a $300-600 million gain in trading profits. Although fixed-income trading revenue might be lower, the other areas, such as equity trading, should be higher.

Table by Chris B Murphy and data from seekingalpha.com.

What Does This Mean?

Bank of America's NIM and net interest income will likely decline in Q4-18 and possibly in Q1-2020 – perhaps by a few hundred millions. The loss in revenue should be offset with higher trading income, although that's not always easy to forecast. Brian Moynihan and company are great at managing costs, but I'm not sure how much more they can squeeze out in savings in the coming months. At some point, the economic fundamentals have to support earnings. Or to put it another way, there need to be catalysts driving the "E" in the P/E ratio for the bank.

I realize this article isn't a comprehensive analysis on Bank of America. There are other pockets of revenue, such as new client or loan growth from digital banking sales, which should produce a boost to both revenue and profit margins.

Overall, I believe bank stocks are currently pricing in a substantial rise in yields, and in particular, the 10-year yield. It's hard to say how much is priced into BofA, but I believe it's at least 2% or higher for the 10-year yield, which would typically widen the 2-10 spread and boost NIM.

However, at the time of this writing, the rise in the 10-year yield is not materializing because economic growth is subdued and nervousness remains in the markets surrounding global growth and geopolitical events. Remember, the 10-year yield is driven, in part, by growth expectations. And with business investment and CEO optimism remaining subdued, the consumer has to provide most of the growth in the economy.

In the short-term, something's gotta give. Either bank stocks correct lower by 10% or so, or the 10-year yield needs to jump north of 2.2% in the coming months. Otherwise, we might trade sideways until the economic fundamentals begin to take shape in the early part of 2020.

However, any correction in BAC should be a long-term buying opportunity as long as the economy remains stable, and no new geopolitical issues arise that would push the Fed to increase its dovishness, cut rates, and lead to further-depressed yields.

Although I'm bullish banks in the long term, I want to be comprehensive, please review my earlier article highlighting the potential risks to banks and the bank rally.

To have the next article emailed to you, click the "Follow" button next to my name at the top of this article and check "Get email alerts."

Follow Chris B Murphy and get email alerts
+
Add a comment
Disagree with this article? Submit your own.
To report a factual error in this article, click here.
Your feedback matters to us!