After a somewhat disappointing third quarter, the company's growth trajectory appears back on track.

Following a massive rally in early 2019 and subsequent sell-off, the stock appears to be flying below the radar of most market participants again.

Bargain valuation at just slightly above 2x FY2020 revenue expectations for a company with 60%+ gross margins, no debt and sufficient liquidity for another couple of quarters.

Consistent execution will be key for HyreCar achieving a valuation more in line with peers.

Shares of niche carsharing services provider HyreCar (HYRE) experienced a volatile 2019 with the stock briefly eclipsing $8 in March but falling back all the way to the $2 mark last month after revenues dipped sequentially in Q3 and investors started to scrutinize the company's growth trajectory.

That said, in recent weeks the shares have rallied more than 60% from its December lows, most likely in anticipation of improved Q4 numbers which the company indeed managed to deliver on Monday (emphasis added by author):

LOS ANGELES – HyreCar Inc., the carsharing marketplace for ridesharing, today announced preliminary results for the fourth quarter ended December 31, 2019. Fourth quarter revenues are expected to be between $4.6 million to $4.8 million, and the number of rentals days, that grew each month throughout the quarter, should be approximately 190,000 for the quarter.

“We exceeded all of our expectations in the fourth quarter even as we continued to improve and expand every aspect of our partnerships and platform. In addition to higher revenues, as our commercial initiatives accelerated car supply in key markets, utilization of these cars continues to grow and retention of cars, drivers and vehicle owners has increased during the quarter,” said Joe Furnari, Chief Executive Officer of HyreCar.

“These metrics show the value of our platform for commercial partners and dealerships by allowing them to truly benefit from the Transportation as a Service industry while at the same time helping them fully optimize their inventory and expand their business opportunities into new revenue streams.” Furnari continued, “We expect our partnerships to expand the number of cars on the platform while maintaining high utilization and retention throughout 2020.”

While preliminary results appear just slightly above consensus expectations, top-line growth is nevertheless impressive, particularly after revenues unexpectedly contracted in the third quarter. At the mid-point of the range, sequential revenue growth calculates to 27% while year-over-year growth should exceed 50%. 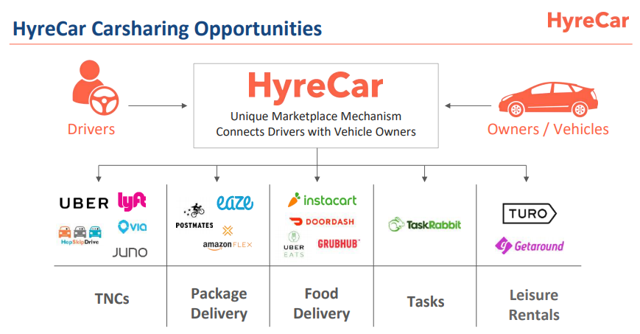 In addition, rental days increased by 30% sequentially to approximately 190,000.

Despite the strong preliminary Q4 sales trends, investor reaction on Monday remained rather muted as the shares finished the session up by just 2.9% on below average volume.

Admittedly, the recent recovery rally might have limited the potential for another substantial move but for my part, I was particularly surprised by Monday's anemic trading volume which points to the stock again flying below the radar of most investors after the company failed to live up to high hopes created in early 2019.

The company's growth ambitions have resulted in ongoing, material cash usage and the requirement to raise additional funds on a more or less regular basis. After a recent shelf registration filing, investors might be particularly wary of another equity offering in the not too distant future.

That said, the company just raised $10.5 million in gross proceeds six months ago and should have sufficient liquidity for the next couple of quarters.

With HyreCar's growth trajectory apparently back on track, the company's valuation at just a little over 2x estimated FY2020 revenues appears eye-catchingly low but the majority of investors will likely require the company to perform according to or even above expectations for another couple of quarters before revisiting the story after the recent hiccup.

Investors looking for more color on HyreCar should consider fellow contributors' WY Capital and Jeremy Blum work on the company.

Personally, I have taken an initial position in HyreCar as I do expect rather positive management commentary and FY2020 guidance on the upcoming Q4 conference call.

Should the company manage to consistently outperform expectations over the course of the year, I would expect valuation to at least double from current levels.

HyreCar appears to be back on track after some less-than-stellar Q3 results as the company released strong preliminary Q4 top-line results on Monday.

Valuation remains rather inexpensive for a high-growth company with 60%+ gross margins, no debt and sufficient liquidity for the next couple of quarters.

Consistent execution will be key for the market to assign higher multiples to HyreCar going forward.

That said, shares represent an ultra-high risk/reward scenario due to the company's somewhat inconsistent performance last year and the likely requirement to raise additional capital over time.

Disclosure: I am/we are long HYRE. I wrote this article myself, and it expresses my own opinions. I am not receiving compensation for it (other than from Seeking Alpha). I have no business relationship with any company whose stock is mentioned in this article.

Follow Henrik Alex and get email alerts
+
Add a comment
Disagree with this article? Submit your own.
To report a factual error in this article, click here.
Your feedback matters to us!