A couple of years ago it was announced that Macy's (NYSE:M) is investing in what it's calling its "Growth50" stores; a $200M investment to upgrade 50 key stores across the U.S., in order to create a more vibrant shopping customer experience. Among other things, the Growth50 stores were upgraded with new lighting and flooring, renovated fitting rooms and restrooms, new or expanded mattress or furniture departments, new product assortments unique to each location's demographics, new food and beverage options, increased staffing levels, and new services like 'My Stylist' (a complementary personal shopping service), 'At Your Service' (a dedicated location for online purchase pick-ups and returns) and 'Scan and Pay' (a feature on the mobile app that allows users to process their own purchases).

This investment is paying off. The Growth50 stores have been delivering solid results. As Macy's CEO mentioned, they have “significantly outperformed the rest of the fleet. These stores had notably higher customer retention rates and better overall customer satisfaction.” Based on the success of Growth50, the plan is to now roll it out to an additional 100 stores, increasing the tally to 150 stores (now referred to as "Growth150").

Given the promising results, important questions for mall/retail REIT investors are: in which stores did Macy's decide to invest in? Where are these initial 50 and subsequent 100 stores? This is an notable investment as Macy's is an important anchor tenant for many malls and shopping centers across the US. Also, as Macy's invests in upgrading various stores, this also benefits the entire center/mall via a positive spillover effect.

Where are the Growth50 stores?

Regarding the initial Growth50 stores, the most interesting observation is that Macy's chose to invest in stores located predominantly in A-malls. In fact, more than 70% of the Growth50 stores are located in malls owned by publicly listed A-mall REITs, namely Macerich (MAC), Simon Property Group (SPG), Taubman Centers (TCO), Brookfield Property (BPR) and Unibail-Rodamco-Westfield (OTCPK:UNBLF). Note, all these REITs are based in the US, with the exception of Unibail-Rodamco-Westfield which is headquartered in Paris, France, but has a large presence in the US via the Westfield brand. The list below is filtered to show the Macy's Growth50 stores located in malls owned by the publicly listed A-mall REITs: 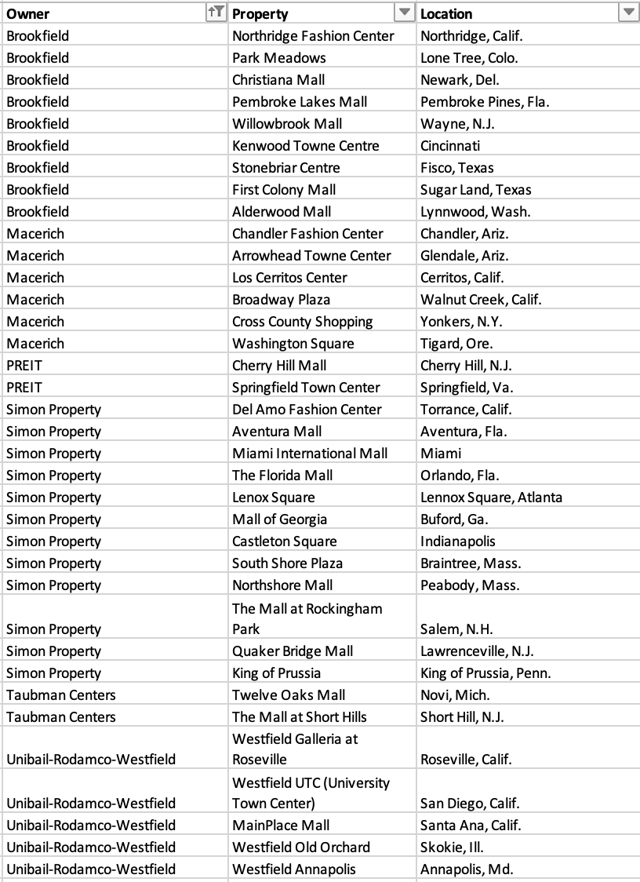 In addition, in terms of other publicly listed mall REITs, CBL & Associates (CBL) also appears in the list, with its Fayette Mall in Lexington. This reinforces the finding that Macy's is investing in its stores situated in A-malls, as Fayette Mall is one of CBL's best performing malls, with sales in excess of $550 PSF, as per the latest 10-K. The remaining Growth50 stores are in centers owned by companies like Pacific Retail Capital Partners, Queensland Investment Corporation, Triple Five Group and The Forbes Company.

In short, these Growth50​ stores are predominantly found at better, A-malls, and have been performing strongly despite pressure in the department store space and the so-called 'retail apocalypse'. Reading between the lines, this is another indication that A-malls are resilient. Many mall tenants are selling record amounts and it is fair to say that the headwinds are caused by lower productivity malls, in many instances in the C and D category.

The market is incorrectly bundling all malls into one category, but the reality is that not all malls are the same. In fact, Macy's was encouraged by the brick-and-mortar sales results of its Growth50​ stores that it is investing more into news stores, rolling out of the concept to 100 additional stores (the "Growth150" as mentioned above). These initiatives are encouraging for deep A-mall owners like MAC, TCO, SPG and BPR.

Where are the Growth150 stores?

We analyzed the Growth50 stores. Given that Macy's is expanding this initiative to an additional 100 stores, mall investors will want to know: where are these stores located? Again, more than 70% of the additional Growth 100 stores are located in malls owned by the publicly listed A-mall companies, namely, MAC, TCO, SPG, BPR and UNBLF. 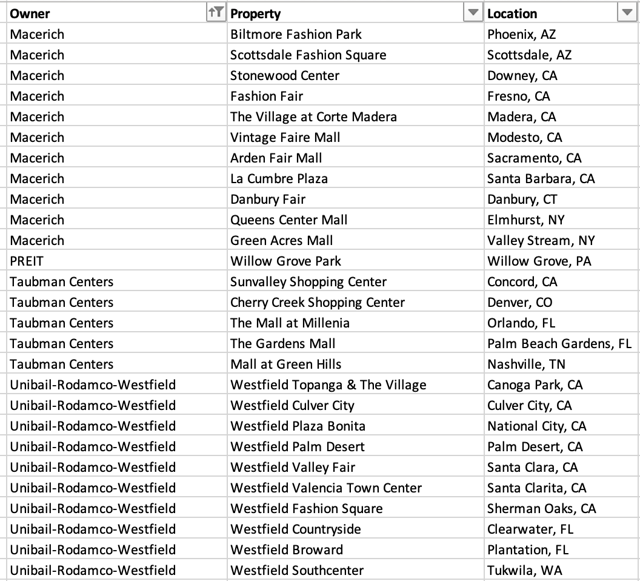 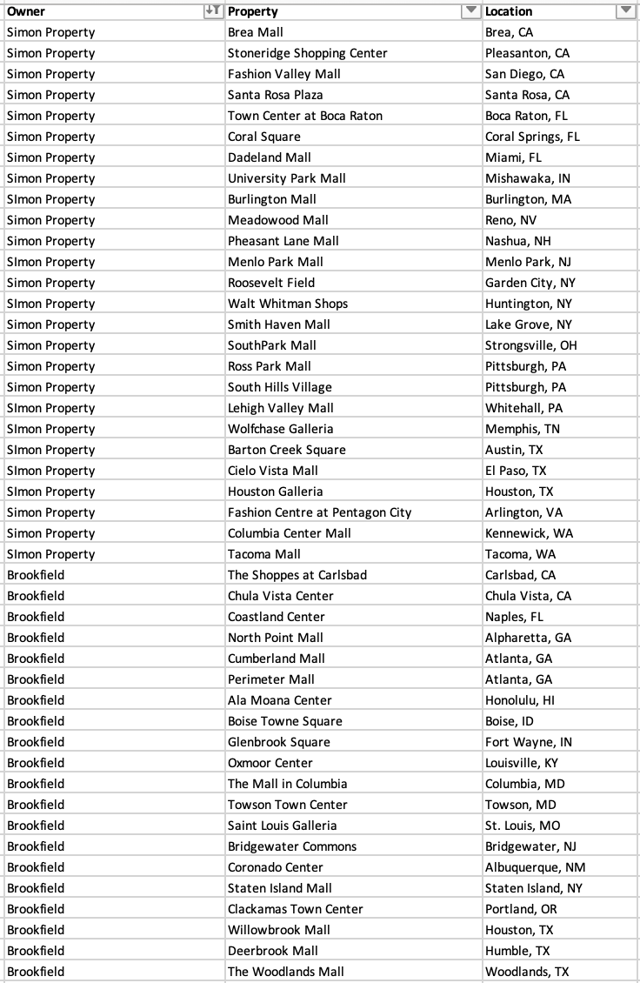 Again, the fact that Macy's is choosing to invest in these locations means something; not all malls are the same. A-malls are performing well and this is supported by the solid data reported by many of the A-mall REITs. But it is also supported my Macy's investment strategy in the Growth150 stores. Macy's is investing in online/e-commerce but it also investing in good brick-and-mortar locations. Macy's CEO has said that upgrades will continue beyond the Growth 150 into 2020, potentially expanding to half of Macy's footprint. This means there will be more of this spillover effect into the malls, and when combined with all the redevelopments malls owners are currently implementing, with an emphasis on mixed-use, entertainment, experiences etc, one can see a clear path towards a sentiment shift and ultimately brighter days ahead.

We analyzed the locations in which Macy's is investing. It is fair to say that Macy's has the best insight regarding which of its stores are performing well and are worthy of maintaining and investing in. So far, the answer is clear. Macy's is investing in stores which are part of A-malls, most of which are owned by the publicly listed REITs. In fact, more than 70% of the stores Macy's is investing in are owned by the publicly listed A-mall REITs. This is another indication suggesting that not all malls are the same, unlike what the mainstream media suggests. One needs to view mall assets on a case-by-case basis. The cookie-cutter, one-size-fits-all formula is no longer applicable in the mall space. So far, A-mall companies like MAC, TCO and SPG are producing solid results, despite operating in tough conditions that are constantly clouded by the ultra negative narrative of the so-called retail apocalypse. I recently wrote an article entitled Misleading Headlines In The Mall Space - Things Are Actually Much Better which highlights that the mall sector is actually in much better shape than most think. In particular:

Mall REIT share prices are in depression mode, dividend yields are at sky-high levels and so are the discounts to NAV. For example, MAC is trading at 50%+ discount to consensus NAV and 12% dividend yield. Macy's Growth150 stores touch around 50% of MAC's portfolio, which will further boost the performance of these well performing Macy's. Also, the recent store closures announced by Macy's dont affect any of MAC's properties. Going forward, I expect companies like MAC and TCO to experience substantial dividend yield compression, meaning share prices are expected to increase and therefore the discount to NAV narrowed. The market will have its 'wake up' moment, sooner or later.

Disclosure: I am/we are long MAC. I wrote this article myself, and it expresses my own opinions. I am not receiving compensation for it (other than from Seeking Alpha). I have no business relationship with any company whose stock is mentioned in this article.

66 Comments
To ensure this doesn’t happen in the future, please enable Javascript and cookies in your browser.
Is this happening to you frequently? Please report it on our feedback forum.
If you have an ad-blocker enabled you may be blocked from proceeding. Please disable your ad-blocker and refresh.