Developed markets have outperformed emerging markets by a healthy margin in the last decade but this doesn't mean a comeback is unlikely.

Things look interesting when valuation multiples are incorporated into the analysis.

In the last 5 years, U.S. markets dominated its global peers by a healthy margin, which doesn't come as a surprise considering the tax cuts in late 2017 and the stellar performance of American companies across industries and business sectors. As evident from the below chart, emerging market equities, measured by the performance of the iShares MSCI Emerging Markets ETF (EEM), have returned disappointing results to investors in comparison to the S&P 500. 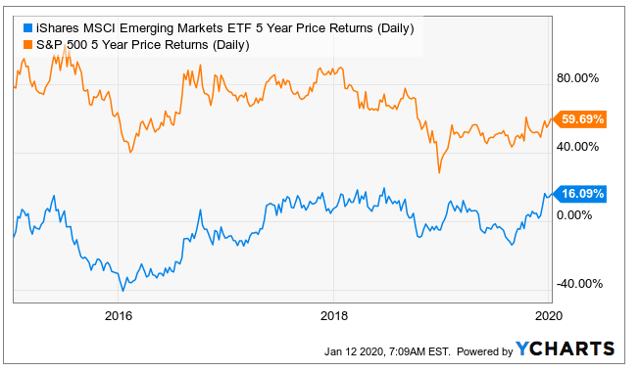 Despite this lackluster performance since the beginning of 2015, it's safe to say that EEM looks an attractive investment for 2020, based on several developments and indicators that are the subject of this analysis.

Can emerging markets stage a comeback?

Empirical evidence is in favor of emerging market equities. Over the last 15 years, EEM has outperformed global markets, which is indicative of the high-growth opportunities available in these markets. Even though world markets caught up with the performance of emerging markets during the financial crisis, and in 2016, the spread has once again increased sharply afterward.

This long-term performance profile is proof of the ability of developing markets to stage a comeback from recent lows. There's no question about the possibility of a stellar performance from emerging market equities but the question is whether 2020 is the year for this to occur.

Investors often undermine the important role played by demographic factors in the economic growth of a country or region. Factors such as life expectancy, availability of advanced technology, the size and quality of the workforce, and the total population will have an impact on the economic growth of a country. As things stand today, demographics are in favor of the continued growth of the developing world.

According to data from Forbes, at the end of 2017, approximately 90% of the world's population under 30 years of age live in emerging markets. While developed countries such as the United States, Canada, and the United Kingdom are aging, partly due to the improved healthcare facilities, emerging countries are home to the biggest labor force in the world. Many governments around the world are focused on getting the maximum contribution to economic growth from this young population, which should help these countries grow at a higher rate than developed countries including the U.S. in the next decade.

Access to the internet and mobile connectivity are increasing on a global scale, and developing regions are catching up with developed countries at a rapid pace. This will create opportunities for concepts such as the Internet of Things (IoT) to establish a strong presence in Asian, African, and Latin American countries, providing a robust opportunity for tech-oriented industries to grow.

The report by GSMA further points out that the cost of connectivity is decreasing in the developing world, which is a positive sign as more people would have access to the internet and its capabilities. This will be a driver of growth as well.

Trade tensions are easing; a booster for investor sentiment

The trade spat between the two largest economies in the world, the United States and China, escalated for nearly 2 years and investors were concerned about the ability of the global economy to grow under these tensions. The tit-for-tat tariffs implemented on each other by these two countries were negatively affecting a few business sectors including agriculture and technology in both the U.S. and China. 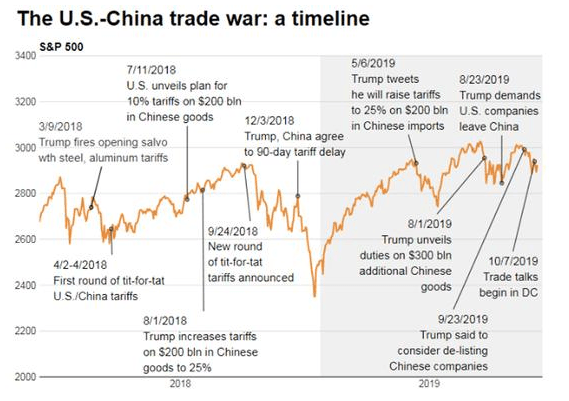 The Phase One trade deal has temporarily put an end to this trade war. While the particulars of this deal and the eventual beneficiaries, if at all, are up for debate, the middle ground reached by these two economic powerhouses has already given a boost to investor sentiment. As geopolitical tensions subside, multinational corporations would once again feel comfortable investing in emerging countries to pursue attractive growth opportunities available in these regions.

Whether it be a country or a company, smaller ones have a clear advantage over their large peers; achieving double-digit growth is easy as there's a long way to go to become a mature, large economy. Based on this notion, it doesn't come as a surprise that developing countries usually grow at much higher growth rates than their developed peers. The below graph illustrates the annual real GDP growth in the last 5 years and the projections through 2024. 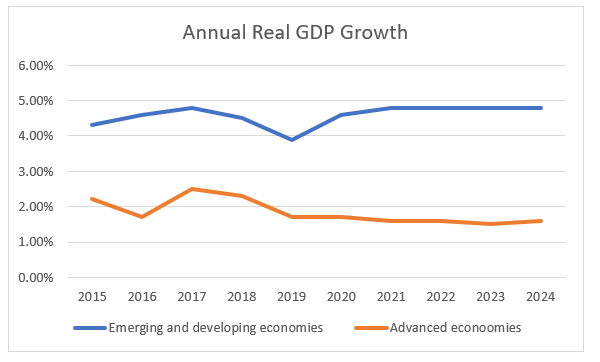 As illustrated, the growth rate differential is expected to widen in favor of emerging markets in the next few years, which is an early indication of where growth opportunities exist. The World Bank shares this same view as well, and projects countries such as India, Brazil, and China to continue to grow at attractive and much higher rates than the U.S. and other developed nations.

Following the lead provided by the Federal Reserve in hiking rates in 2015, many advanced economies raised their policy rates in 2017 and 2018. This eventually led to a similar development in emerging markets as well, which was seen as an obstacle for credit and economic growth in these regions. In addition to this, the Fed's hawkish stance helped the U.S. dollar appreciate as well, which proved to be a major hurdle for the developing world. As we step into 2020, the global monetary policy stance has changed dramatically, driven by a plethora of geopolitical issues that appeared to slow down major developed markets. As illustrated below, advanced economies have now adopted a dovish stance, which has translated into emerging markets as well.

Monetary policy easing will not only help robust credit growth but will also lead to strong currencies as well if the Fed continues to stay dovish. Since August 2019, the dollar has weakened against a few emerging market currencies, including the Russian ruble, Thai baht, and Mexican peso. The trend is likely to continue in 2020.

These developments create a good platform for emerging countries to deliver strong growth in 2020, which should be reflected in the performance of equities.

Things get more interesting when valuation multiples come into play

It makes sense that I'm analyzing emerging market equities because my roots go back to Sri Lanka; a developing nation. Why I wanted to share the below table with my readers should not come as a surprise considering Sri Lanka is expected to top earnings growth in 2020. 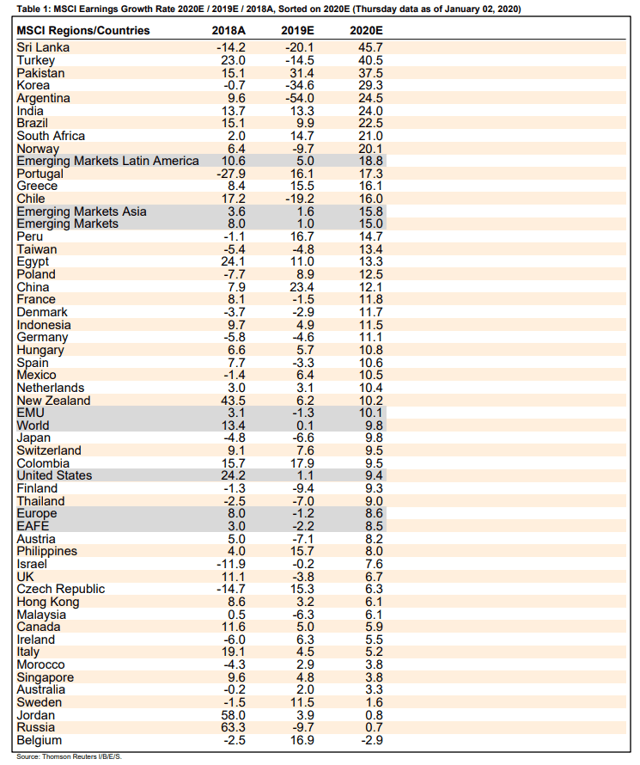 Many developing countries are expected to report stellar earnings growth in 2020, and naturally, an uptick in profitability should translate into a positive performance from emerging market equities. Things get more interesting when we look at the valuation multiples. As we can see from the below chart, emerging market equities are trading at a significant valuation discount to developed market equities, despite the high-growth expectations, easing trade tensions, and the supportive monetary policy decisions.

I expect this valuation discount to trim in 2020 and provide attractive returns to investors. Even though there's a possibility of adverse geopolitical developments, I believe long-term oriented investors should focus more on fundamentals.

China is no longer the double-digit growth machine it used to be, but the country is well and truly one of the fastest-growing nations in the world despite the massive size of its economy. Many international institutions and analysts agree that economic growth of China will slow down in the next few years but at the same time, remain positive. Growth rates of above 5% should be sufficient for many companies to thrive, especially considering the new opportunities arising from the rollout of 5G and the growth of Artificial Intelligence. 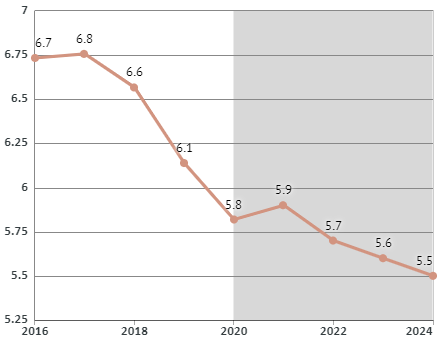 The trade war that escalated in the last couple of years softened the investor sentiment toward China and many investors altogether avoided investing in this fast-growing nation because of the uncertainty surrounding economic and political policies. This was a major reason for the underperformance of equity markets, which might reverse in 2020 along with the improving outlook from both these perspectives.

EEM has a significant exposure to China, which was a major reason behind the lackluster performance in recent years in comparison to the S&P 500. However, this very feature could prove to be the differentiator in 2020. 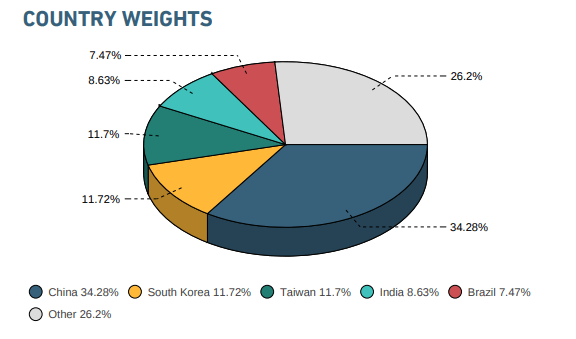 South Korea and India are also two countries that are expected to grow above the global average in the next 5 years, and EEM has positions in both these countries. A pick-up in global manufacturing in 2020 is projected by JPMorgan, which would be a driver for most emerging markets.

The fund is not only for growth investors

There's no doubt that investors wanting to diversify their portfolios and gain exposure to growing parts of the world would turn to EEM time and time again. A lesser-talked-about fact is that EEM is a nice play for income investors who want exposure to international dividend-paying stocks. While providing a steady stream of income, an investment in EEM could prove to be a hedge against the expected slowdown of developed markets as well. The fund currently trades at a dividend yield of 2.14% and distributions can be expected to increase in the future along with higher profitability and dividends of constituents.

An investor would have done better to stick to the U.S. and other developed markets in the last 10 years. However, this is no proof that emerging markets cannot stage a comeback. As things stand, I expect 2020 to mark the beginning of this comeback, and EEM is well-positioned to benefit from this expected growth. It's time to focus more on fundamentals and less on geopolitical tensions. EEM is one of my top picks for 2020, and some analysts agree.

"EM equities stand to benefit most from a turn in global manufacturing, a Phase 1 trade truce, and from some likely pick-up in China data flow" (Mislav Matejka, global equity strategist at JPMorgan)

"If your asset allocation has significant domestic exposure and little-to-no international equity exposure, we think now is an excellent time to make a shift." (Bespoke Investment Group)

If you enjoyed this article and wish to receive updates on my latest research, click "Follow" next to my name at the top of this article.

Disclosure: I am/we are long EEM. I wrote this article myself, and it expresses my own opinions. I am not receiving compensation for it (other than from Seeking Alpha). I have no business relationship with any company whose stock is mentioned in this article.

Follow Dilantha De Silva and get email alerts
+
Add a comment
Disagree with this article? Submit your own.
To report a factual error in this article, click here.
Your feedback matters to us!