On paper, Banco Macro looks to be an amazing long opportunity but financial data is heavily skewed by Argentina's 55%+ inflation rate.

In reality, Banco Macro has poor profitability and is not much cheaper than a safer U.S. bank when corrected for the exchange rate.

Because BMA is an ADR, its stock price is essentially a function of the country's highly volatile currency.

The only way for BMA investors to come out positive is a U.S. dollar bear market.

A wise person once said that if something looks too good to be true it is probably not true. This proverb is truer for investment success than perhaps any other field. Many companies have stellar financial ratios that attract immense investor inflows only to be duds with hidden risks.

One company where this problem is particularly true is Argentina's Banco Macro (BMA) which trades as an ADR in the U.S. The bank has extremely low valuation ratios (TTM P/E: 3X), very high revenue & income growth (doubled TTM), and a ROA last year of 13% (most banks have one of 1-3%).

Surprisingly, most articles covering Banco Macro fail to fully realize why these figures are so extreme: Inflation. In the U.S. it is elusive and relatively nonexistent but in Argentina, it is the driving macroeconomic force.

To illustrate, take a look at the Argentine Peso vs. BMA's price:

As you can see, a bet on BMA is a bet on the Argentine Peso. If you believe Argentina will successfully lower inflation, BMA will likely deliver strong performance as its valuation will rise as well as the exchange rate the ADR is priced in.

As you have probably heard, Argentina has been struggling with keeping its economy afloat which has been a drag on the bank. Banco Macro is one of the largest banks in Argentina and its fate is accordingly largely at the whim of its government which is not known for a free-market orientation.

The country generally runs under a "Peronist" political ideology which usually aims for high spending with a pro-labor/nationalistic flare. Argentina has been running a large 4-6% of GDP deficit for years much of which goes to consumer and business subsidies and has seen its debt to GDP skyrocket:

The previous leader Mauricio Macri aimed to (slightly) reign in spending and stabilize the country's extremely volatile financial system and fight corruption. Last year he lost to the Peronist Alberto Fernández who aims to return the country to its typical path which is historically negative for the country's banking system. Accordingly, when it became apparent that Macri would lose last August, BMA lost about half of its value overnight.

Importantly, Argentina has defaulted on its debt eight times and is on the ledge of number nine. Beyond the 5% of GDP deficit and high debt, the country has a 5.4% of GDP current account deficit, nearly 10% unemployment rate, and has lost about 40% of its FX reserves over the past year. In other words, it is an awful time to be a bank in Argentina and there are few reasons to believe the crisis will be over soon.

A Closer Look at Macro's Financials

When Banco Macro's financial data is corrected for the U.S. dollar exchange rate the negative economic backdrop in Argentina is reflected well. BMA touts a forward "P/E" ratio of 5.7X which looks great on paper but it would be smart to adjust the figure for discount rates.

High inflation generally pressures the value of a country's currency so investors in the BMA ADR have been directly harmed by its decline over the past two years. One could use a currency hedge to mitigate this risk, but that comes with a carrying cost of about 61% as Argentina's current short-term rate is 63% while the U.S.'s is 1.5%. Thus, one must use an interesting rate multiplier to adjust BMA's "P/E" ratio for the actual U.S. dollar earnings one would receive by owning the stock. This is 1.63/1.015 or 1.6X which gives BMA an adjusted forward "P/E" ratio of 9.1X. While this is still low, it is worth pointing out that the U.S. Banking ETF (KBE) has a forward weighted average "P/E" ratio of 11.7X so BMA's "P/E" is really nothing to write home about given the higher risks in the country.

In Pesos, Banco Macro had an amazing ROA of 13% last quarter that has consistently been above 5% for years. However, when priced in U.S. dollars that figure drops below that of almost all major banks. See below: 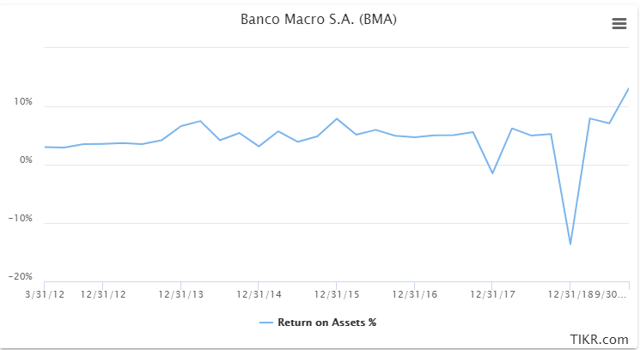 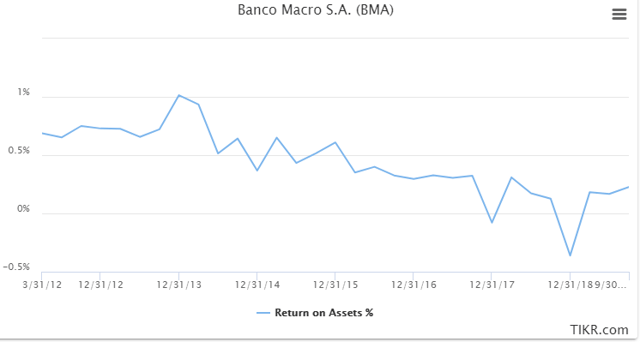 As you can see, the bank's ROA has actually been declining for years and was a meager annualized 23 bps last quarter. Even more, in U.S. dollar terms the bank has seen its assets decline by nearly 50% since 2017 with the bulk of depreciation coming from its loan portfolio. Of course, those assets pay higher yields to make up for inflation losses, but this is still a very problematic situation for the bank.

On a positive note, the bank has been able to lower its leverage over the past few years and now has a healthy liabilities to assets level of 80%:

This is good as it demonstrates that the bank has been able to let inflation devalue its liabilities at a faster rate than its assets. If they can continue on this path, they may emerge from the currency crisis as a strong healthy firm that will likely outperform global peers for a long period of time. That said, it may be a (very) long time before the crisis is over.

I do not believe that BMA is short nor do I believe it is a bad bank, but it is overwhelmingly clear that its current financial figures do not tell an accurate picture. Banco Macro is highly subject to the Argentine government which does not have an investor's interest in mind, particularly international investors subject to the Peso.

Any attempts at the necessary austerity policy in Argentina have been faced with extreme public backlash often ending with an ousting of center-right leaders and occasionally default on government debts. The Argentine central bank is attempting 'to do the impossible' by lowering interest rates (in order to boost consumption and stave off default) and end the country's state of hyperinflation. Of course, this is the only way for Banco Macro to deliver a positive return to investors.

There is one situation where the ongoing monetary crisis will end. If the U.S. dollar exchange rate continues to slide, Argentina's inflation rate will decline without an increase in its discount rate. This could send BMA much higher as it would likely see a higher valuation due to the aforementioned 'interest rate effect' and greater profitability. However, there is little Banco Macro nor the Argentine central bank/government can do to make this happen.

The dollar index is down about 3% from its October 2019 high, but I believe it is too early to call for the dollar bear market that is necessary for BMA.

Follow Harrison Schwartz and get email alerts
+
Add a comment
Disagree with this article? Submit your own.
To report a factual error in this article, click here.
Your feedback matters to us!