Pretium Resources' (PVG) share price has been bouncing up and down for the last three years. It turns out that although its Brucejack mine is a world-class high-grade gold project, the geology of the deposit is pretty complex and it is really hard (at least for now) to reach the projected gold grades and production volumes. Despite this fact, the mine is profitable, it is generating big volumes of cash flows and it enabled Pretium to reduce its debt, and to eliminate the gold stream as well as the offtake agreement. And although it is possible to say that Pretium is probably in its best shape ever, its share price is well below the summer 2019 peak levels just below $14.

Besides the ups and downs of the Brucejack mine, only little attention has been paid to Pretium's other world-class gold project, Snowfield. However, at gold prices above $1,500/toz, it presents a significant value and some serious mid-to-long-term development options. The project is located only several kilometers to the north of Brucejack (map below). It has much lower gold grades, on the other hand, it is much bigger. 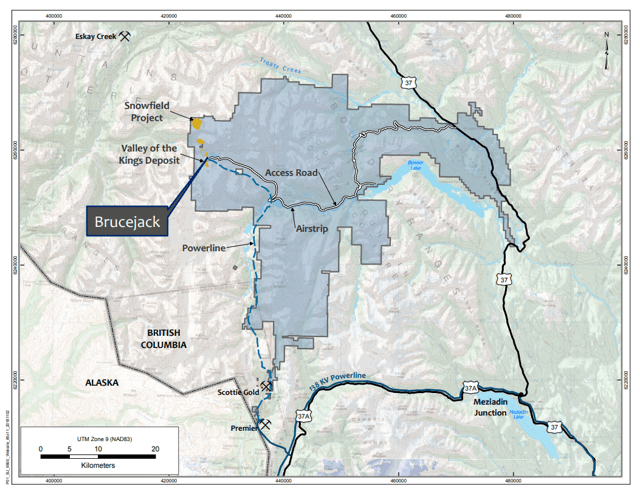 As can be seen above, although Snowfield is situated close to Brucejack, it is a completely different type of deposit. While Brucejack is a high-grade gold deposit, Snowfield is a low-grade polymetallic deposit. Although gold is the primary metal, the other metals provide some nice additional value. According to the 2010 PEA, the Snowfield mine should produce 607,000 toz gold, 57.8 million lb copper and 4.5 million lb molybdenum per year over the 23-year mine life. The CAPEX was estimated at $3.4 billion. The operating costs were estimated at $8.52/tonne milled. At a projected throughput rate of 120,000 tpd, the total annual operating costs would equal $373 million. At the current metals prices, it equals to $276/toz gold or $505/toz of gold equivalent. The original plan was to get Snowfield into production by 2018, however, after the gold prices started to decline, Pretium started to focus on the Brucejack project, as it had much higher gold grades and it was much less capital intensive. Although the PEA is 10 years old, it can provide at least some basic approximate picture of the future mining operation.

As can be seen, the cost to build the mine will be really high. Although the study is old, the nature of the deposit dictates that it must be developed as a large low-grade operation and it is almost sure that also any future economic studies will come to a CAPEX of several billion dollars. This is why Pretium will most probably have to look for a partner, in order to reduce the development risks. What is important, one potential partner is right behind the border of Pretium's Snowfield claims. 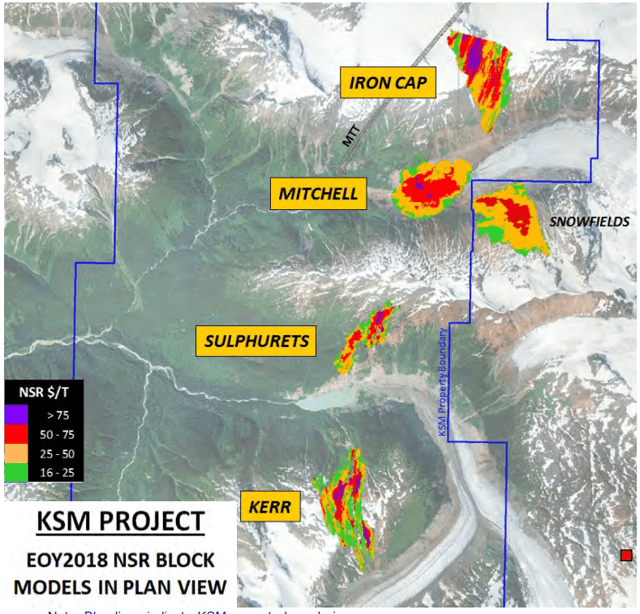 The Snowfield project lies next to Seabridge Gold's (SA) KSM project. KSM consists of several known mineralized zones that contain inferred and indicated resources of 44 million toz gold, 27.8 billion lb copper, 302 million toz silver and 175 million lb molybdenum. KSM's gold grades are lower compared to Snowfield, on the other hand, the copper and silver grades are higher. As KSM is more advanced compared to Snowfield, it has also some reserves (38.8 million toz gold and 10.2 billion lb copper). A 2016 PFS envisions a long-life mining operation with an annual production capacity of 540,000 toz gold, 156 million lb copper, 2.2 million toz silver and 1.2 million lb molybdenum on average, over 53-year mine life. The CAPEX was estimated at $5 billion.

However, there is also a PEA that was prepared in 2016 as well, but it includes also higher-grade ore from Deep Kerr and Lower Iron Cap zones. This scenario projects an annual gold production of 592,000 toz gold, 286 million lb copper and 2.8 million toz silver per year on average, over 51-year mine life. In this case, the CAPEX was estimated at $5.5 billion.

It is obvious, that both, Snowfield and KSM will have to face the same problem. They will need several billion dollars to get into production. This fact forced Pretium and Seabridge to try to find a common solution several years ago. They signed agreements on cooperation that resulted in a study examining the economics of combining Snowfield and KSM. The study was completed in Q1 2012 but its detailed results haven't been released. Only Pretium's webpage states:

The internal engineering study was finalized during the first quarter of 2012 and indicates that developing the KSM and Snowfield deposits together could produce better economics than developing KSM as a stand-alone project, although no property acquisition costs or allocation of initial KSM capital have been considered.

Pretium is well-positioned right now. As the Brucejack mine is in production, it generates huge cash-flows (over $200 million between Q4 2018 and Q3 2019), and it still has at least 12-years of mine life left, Pretium has several options how to deal with Snowfield:

I would prefer the fourth option, however, what is important, all of the abovementioned options provide significant upside potential for Pretium's shareholders. All that is needed, is the gold price staying at its current levels or even higher.

Pretium's market capitalization is $2 billion right now. Its enterprise value is $2.5 billion. Despite some operational issues, the Brucejack mine was able to generate operating cash flow of $201.8 million over the last 4 quarters (Q4 2018 - Q3 2019), which means that its price-to-operating cash flow ratio is approximately 10. As this value is in line with its peers, it is possible to conclude that the market doesn't attribute any value to Snowfield right now. By buying shares of Pretium Resources at their current price, the buyer buys a world-class long-life high-grade gold mine located in a safe jurisdiction (although with somehow unstable quarterly production volumes), and he gets an even larger (although low-grade) gold-silver-copper-molybdenum-rhenium deposit (with market value of contained metals over $73 billion) for free.