GameStop has drawn a flood of misleading doomsday headlines after the last earnings report.

GameStop is still a far cry from bankruptcy and has a healthy cash balance in relation to debt.

The company has been putting their money where their mouth is and has bought back over 1/3 of outstanding shares in 2019.

The cost savings that GameStop has been implementing, combined with the buybacks, will allow shareholders to reap compounded profits once the new console cycle begins in late 2020.

Shorting GameStop is purely speculative at this time; the short float is dangerously high and the chance for additional negative catalysts after the holiday report is slim to none.

To say that 2019 was a rough ride for GameStop shareholders would be an understatement. The company called off its search for a buyer, posted a 673 million dollar loss for FY2018, and drastically cut sales and EPS estimates in the last earnings call, invoking ever-creative analogies from analysts. I chose the articles I did above, instead of GameStop's press releases, to show the kind of apocalyptic spin the media is taking on GameStop. There is no shortage of comparisons to BlockBuster and even the joke that GameStop cannot trade itself in for a dollar and some change has become somewhat of a meme. Outside of some of the bullish articles on Seeking Alpha, it's rare to find an opinion that strays from complete confidence that GameStop is breathing its last.

Given all this negative news, in addition to the still growing threat of digital gaming and e-commerce disruption from retailers like Amazon, I would not fault anyone for believing that GameStop is dying. In fact, I also believe that GameStop is dying. However, it is not the fact that the business will die that is important, but rather the life expectancy. If a business can be compared to a person, GameStop does not have a terminal disease with costly medical bills but rather is simply nearing its retirement. I can say this with confidence because GameStop has a solid balance sheet and more than enough liquidity to survive until its last hurrah, when the next console cycle begins in late 2020 with the release of the Sony (SNE) PS5 and Microsoft (MSFT) XBox Series X. Before GameStop 'retires', it can create a lot of value for shareholders. This fact, combined with the extremely high short interest, makes it hard for me to justify any sort of short position in the stock. Ultimately, the primary goal I am trying to achieve with this article is not to demonstrate the long-term viability of GameStop, but to hopefully shed some light for anyone considering shorting this company to think long and hard before doing so.

The headlines would have one believe that the company is bleeding money, but the true story couldn't be farther from the truth. The loss the company had in 2018 was primarily due to impairment and goodwill write-downs of over 1 billion dollars and adjusting for this, the company actually made $1.45 a share. Additionally, as of the last earnings report, the company had no goodwill left to write off, so the chance for sensational headline risk from losses is significantly lowered.

Unfortunately, in the holiday sales update, the company's performance was worse than expected, as it was in the third quarter. The caveat is that cash flow will still be positive, given that liquidity, including the credit revolver, at year end will be around $900 million. This is after the company already paid off $401 million of it debt in 2019, leaving only $419 million left. There is more than enough liquidity to handle the debt, so there is no risk of GameStop going bankrupt this year. Given the current market cap of the company of $360 million at a price of around 5.50 a share, all GameStop needs to do is continue to convert inventory, which it has over $1 billion worth of, into free cash flow and continue buying back shares. Given over 1/3 of outstanding shares have already been purchased, management is definitely walking the walk. And remember, GameStop is generating free cash flow at the end of the console cycle, so once the new cycle begins, the cost improvements and buybacks already executed will multiply profits all the more. The key takeaway is that GameStop needs to last until the next console cycle to benefit, and with the liquidity, I believe it will.

Given all this, I am bullish on GameStop in the medium term. GameStop does not need to last more than a few more years for shareholders to profit immensely. Now that I have explained the bull case, I will attempt to provide scenarios that will result in a profitable short of GameStop. 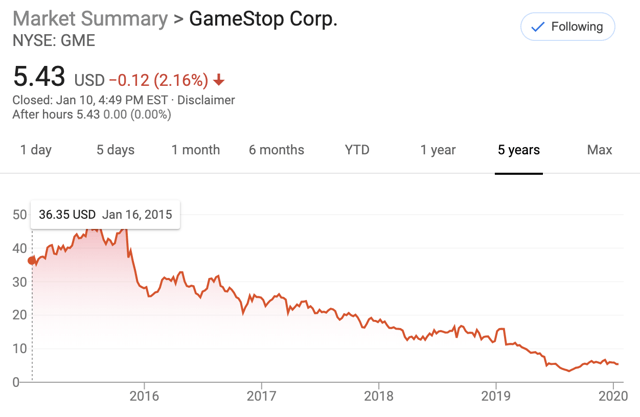 Given the trend over the last 5 years, it may seem like an easy short but past performance is not indicative of future returns. In order for one to make money shorting GameStop, there have to be shares available for shorting, the stock's decline needs to exceed the cost of borrowing, and the stock needs to be bought back at that lower price. One of the most interesting statistics about GameStop stock is that over 100% of the float is shorted. With about 59 million shares floating after the last quarterly report, and the number of shorted shares fluctuating at over 60 million, I imagine shorts are not covering after management has bought back their shares. Given the high short interest, the cost of shorting GameStop has reached as high at 30%.

Given the likelihood that holiday sales for the new consoles will serve as at least a temporary catalyst for GameStop, a short needs GameStop to drop before then. As it turns out, the holidays sales were not pretty, with a 27% drop in sales for the holiday period compared to the prior year. As the company is now expecting a loss for the full year, any short who entered above $6 has a decent chance to make money in the short term. Given the price right was at about $5.50 before the report, let us say it drops another dollar to $4.50. If management has not been buying stock in the fourth quarter, then that translates to a market cap of just above 300 million. Though the free cash flow is expected to be just half of the earlier estimate, GameStop will still have $900 million in liquidity. If GameStop continues buying back shares at the new depressed price, shorts will have to race to sell, resulting in at worst a quick reversion to the old price and at worst a major short squeeze. The same pattern could happen after the FY earnings as well. It becomes a situation of heads, I win a little bit, but tales, and I lose what I invested and potentially more.

But what if nothing noteworthy happens in the full year report and you want to hold onto your short position for longer-term? This has certainly been a winning strategy over the last few years, but if you want to try a long-term short now, you need the company to be gone in 3 years, or you will lose the vast majority of your principal by then if the cost to borrow remains in the 30% range. Even if the cost was half, you still have to discount future cash flows given the opportunity cost. If GameStop manages to drop 20% each year for the next few years, you only net a 5% gain at a 15% cost to borrow.

Shorts could hope that management squanders capital on various wild goose hunts to bring back growth, and as a bull, this was a fear of mine when George Sherman became CEO. However, management has been extremely frugal in how they spend the company's money, given their cost reductions as part of their GameStop Reboot revamp and their willingness to return shareholder capital. The real risk in the short term is that GameStop did not provide an estimate for their losses for the year after reducing even their $.10-.20 EPS outlook. This is probably the most concerning part of the holiday report for me, as if the losses escalate greatly, then shorts could make great money in the short term. It may very well be a tug of war on the stock price between bearish sells from the last cycle and bullish buys for the next cycle, so I believe the stock will see significant volatility in 2020. Besides an even steeper drop in profits, my only other fear when I wrote my article on GameStop last year was that the next generation consoles may be digital-only, which we now know will not be the case.

Given all this, I personally do not see the risk-reward in shorting GameStop to be worth it for any farther out than the near term. I can understand if one is not a bull given the secular decline of physical media and wants to avoid a position. However, at this point, I believe the easy money has already been made shorting GameStop. Shorts are not just fighting bulls to lower the price, but the company as well as it buys back shares. As a value investor, I look for situations where the downside is limited and the upside is significant. Shorting GameStop has the exact opposite dynamics, as one is limited to doubling their investment in the absolute best case but the losses are limitless.

Note that what I am saying is not in my best interest, as I benefit if shorts drive down the price and management is able to buy back at lower prices. So why did I write this? As much as I enjoy articles that share under-covered gems, I think Seeking Alpha has been most valuable to me when it saved me from losing money on duds. The last thing I want is for retail investors to see the oft-repeated headlines and think that GameStop is an easy short, so I hope this article has provided some reasons to do a little more research first. In the immediate term, GameStop may be a profitable, hisk-risk short but as the new consoles enter the market, tread carefully. As always, look before you dive!

Disclosure: I am/we are long GME. I wrote this article myself, and it expresses my own opinions. I am not receiving compensation for it (other than from Seeking Alpha). I have no business relationship with any company whose stock is mentioned in this article.

Follow Value Adventurer and get email alerts
+
Add a comment
Disagree with this article? Submit your own.
To report a factual error in this article, click here.
Your feedback matters to us!