Torn apart by the US-China trade war, Tencent (OTCPK:TCEHY) shares have finally started to recover. Since the beginning of December, the company appreciated in value by more than 20%, and its stock is, currently, trading at its 52-week high. Better than expected performance in Q3, the successful launch of Nintendo Switch in China, and the upcoming signature of Phase I trade agreement between China and the United States are all positive developments that will help Tencent to keep momentum at the beginning of 2020. Going forward, I see two major catalysts for growth that have a high possibility of pushing Tencent stock price higher, and thereby, I remain bullish about the company's future.

Tencent continues to be the biggest gaming company in the world in terms of revenues. By being located in China, Tencent has two major things going for it. Since China is the largest gaming market with annual revenue of $36.5 billion in 2019, the company is able to successfully monetize its domestic audience by providing an extensive portfolio of online titles to various demographic groups. At the same time, Tencent is able to sign lucrative licensing deals with foreign companies that want to aggressively expand their user base and are looking to enter new markets.

In Q3 alone, Tencent reported an increase of its gaming revenues to $4.13 billion, up 11% Y/Y. As of today, gaming accounts for nearly 30% of the company's overall revenues. Out of those $4.13 billion, around 10-19% of revenues come from international gaming licensing deals (Source: Tencent Q3 Presentation, Page 11). The main reason why every major gaming publisher like Activision (ATVI) and Electronic Arts (EA) wants to make a deal with Tencent is due to the fact that the gaming industry is being heavily regulated by Beijing. The Chinese Communist Party holds a tight grip over the country's entertainment sector. In order for any foreign entertainment product to be released in the country, it first needs to be approved by the government. By leveraging its Beijing ties, Tencent is able to successfully launch new licensed entertainment products in China and make a considerable amount of profits for itself and its partners. As an example, thanks to its partnership with Tencent, Nintendo (OTCPK:NTDOY) has been able to launch its own console Switch in China earlier last month. According to some analysts, Nintendo will be able to sell around 4 million copies of the hardware by March.

Going forward, I believe that gaming will continue to be the company's major driver of growth. As the gaming industry is expected to annually increase in value by 15% until 2025, Tencent will be able to successfully hold a dominant position in the market and benefit from such growth. The company already has plans to broaden its partnership with other gaming publishers and invest more in the development of first-party IPs.

In the last few quarters, the gaming business has been making one of the most impressive returns for the company and I'm positive that it will continue to create additional shareholder value, as it will grow along with the overall gaming market in the foreseeable future.

The US-China trade war that started in the first half of 2018 negatively affected Tencent's share price. The Trump Administration was especially harsh when it came to Chinese tech companies, imposing additional sanctions and limiting their operations inside the United States. However, I believe that the improvement of relations between Beijing and Washington will have a positive long-term effect on Chinese stocks like Tencent and others.

After all, the company's stock started to depreciate in value in the Spring of 2018 when the trade war started and it began to recover at the beginning of December when relations started to normalize.

I personally believe that the selloff that occurred in the last year and a half was unjustified. If we look at the recent earnings results, we will see that the company has been making a lot of progress recently. Its total Q3 revenues increased to $13.7 billion, up 21% Y/Y while non-IFRS operating profits for the same time period increased to $4 billion, up 27% Y/Y.

What's interesting is that the positive Q3 report was released at the beginning of November, but the company's stock started to move upwards only at the beginning of December when the talks with the Chinese government resumed. This makes me believe that Tencent, as one of the biggest public tech companies in China, is indeed sensitive to the trade war issue and its stock closely correlates with US-China trade negotiations.

After all, if we look at the chart below, we will see that in the last 13 quarters, the company has been increasing its revenues sequentially and there was no real reason to drastically depreciate in value in the last year and a half as it did. 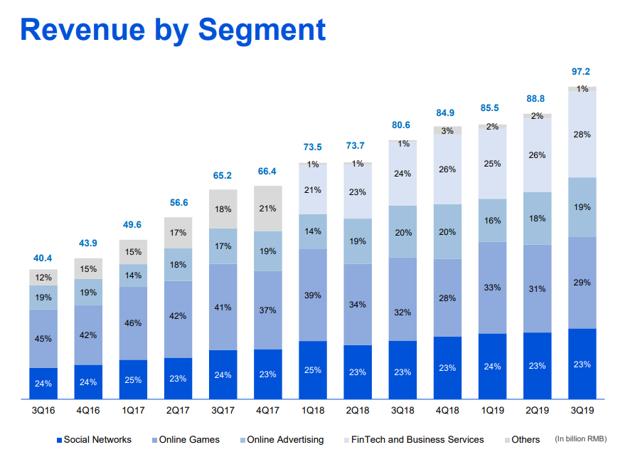 The major mistake that I did when publishing my latest article on the company in April of 2018 is that I didn't take a US-China trade war into account. Back then, the trade war only started and I did not expect that the Chinese tech sector will drastically suffer from it. I was wrong.

While I'm cautiously optimistic now, as tensions are easing off, I believe that if negotiations for the Phase II agreement fail, then Tencent stock will once again suffer. If that happens, then it won't matter how much the company will be able to grow its revenues because the market will start to dump Chinese names once again as it did before.

In addition to geopolitical risk, Tencent could be considered slightly overvalued to its domestic and international peers. The table below clearly shows that the company's P/E of 39x is much higher than the median P/E of its competitors of 27.31x. 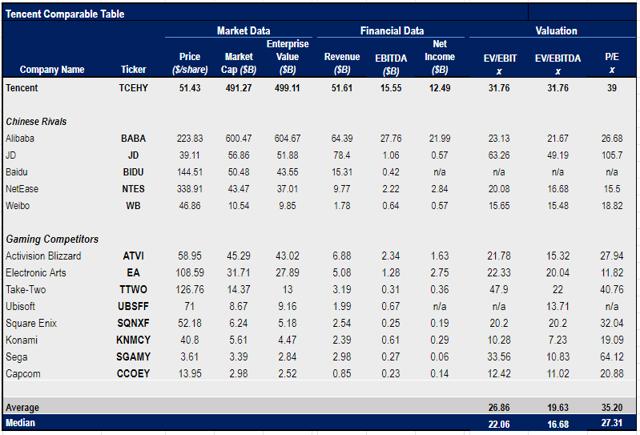 Source: GuruFocus. The data for the table was gathered and structured by the author.

However, Tencent has always been a growth company. In the last three years, Tencent increased more than two times in size and thanks to its competitive advantages in China, it will be able to continue to hold a strong foothold in the gaming and tech industries. Nevertheless, I don't think that it is the best stock for value investors that want to invest in a stable business that is not exposed to political risks.

Tencent is, undoubtedly, one of the most successful gaming companies in history. The gaming business has been the company's major driver for growth in the last few years and it will continue to create additional shareholder value in the foreseeable future. In addition, as US-China relations are starting to slowly improve, Tencent stock has all the chances to appreciate in value even more.

While there are certain geopolitical risks that are associated with Tencent, I believe that there is more upside than downside to the company's stock. According to Wall Street Journal, there are currently 38 'BUY' recommendations for Tencent's stock, which makes me believe that there's no need to sell my position in the company at the current market price.

Aleksey Razdolgin
1.75K Followers
Aleksey is CEO of the proprietary trading company Arbitrage Trades. Aleksey is in charge of creating new opportunities in this rapidly growing investments field. He is personally investing his own money into stocks, cryptocurrencies and other emerging trends of the financial industry.
Follow

Disclosure: I am/we are long TCEHY, ATVI, EA, NTDOY. I wrote this article myself, and it expresses my own opinions. I am not receiving compensation for it (other than from Seeking Alpha). I have no business relationship with any company whose stock is mentioned in this article.