Five mega-tech stocks are dominating our stock market like we haven't seen since 2000.

This poses significant risks for investors, even those that don't own these stocks.

Valuations and equity positioning are at extremes.

History may not repeat, but it often rhymes.

Back in the late 1990s, we had four mega-cap technology stocks that led the Nasdaq Composite to its all-time high in 2000. They were Microsoft (MSFT), Intel (INTC), Cisco Systems (CSCO) and Dell Computer. They were known as the Four Horsemen because of their unquestioned market dominance, and early on they led the euphoria over internet-related stocks that fueled the dot-com bubble. Nearly three years later the S&P 500 index (SPY) had lost half its value.

Today, we have seen more than a 50% surge in the Nasdaq 100 (QQQ) over the past year and a 30% gain in the S&P 500, led by five mega-cap technology stocks. They are Facebook (FB), Apple (AAPL), Amazon (AMZN), Microsoft (MSFT) and Google (GOOG) (NASDAQ:GOOGL). These names also have unquestioned market dominance in today’s marketplace. 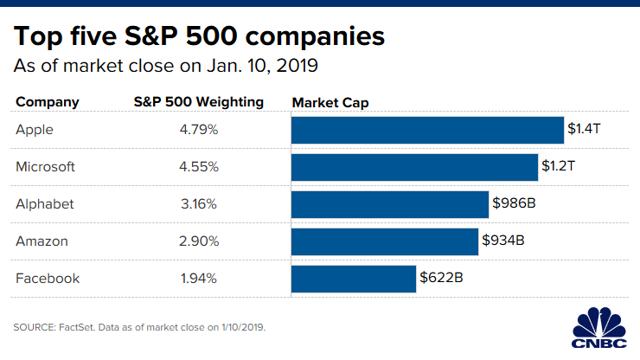 One similarity between the Four Horseman of 2000 and the mega-caps of 2020 is their tremendous influence on the overall market, as can be seen below by their cumulative weightings. The weighting of today’s top five names is now 17.3%. I’m not suggesting that history is going to repeat itself, but often it rhymes. If you lived and invested through the 1990s, as I did, then you’ll understand what I am talking about when I say that the dot-com boom was a sentiment-driven rally. I’m starting to see the same explanation for the current rally, as there really haven’t been any concrete fundamental developments to explain or validate it. The momentum stocks are rising in price day after day on hopes and expectations, and Wall Street analysts are happy hop on board for the ride, as usual. 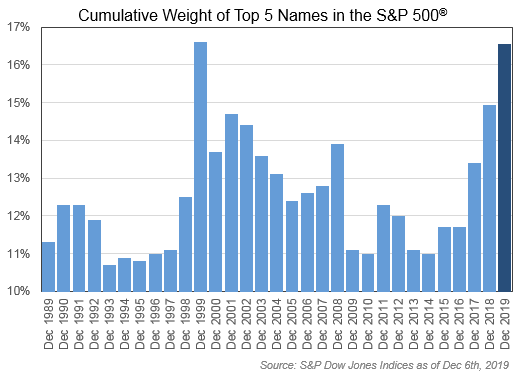 The least expensive of these stocks is Apple, which I own. The last time I bought the stock was in early 2016 at $95 a share when very few investors were interested in it. Carl Icahn had just sold all his shares in the company, citing concerns about business in China. The stock was trading below the market’s multiple, but still had great long-term growth prospects, even though the analyst community was divided on its outlook. It was easy prey for a value investor like me. Today, it’s a different story.

After doubling in price over the past 12 months, analysts are climbing on top of each other to raise price targets. This comes even though the stock is at historically overbought levels. A new high target of $375 came from D.A. Davidson today.

D.A. Davidson raises its Apple [NASDAQ: AAPL] target from $300 to $375, citing the 5G iPhones expected this fall. That would be about 20% upside from current levels. 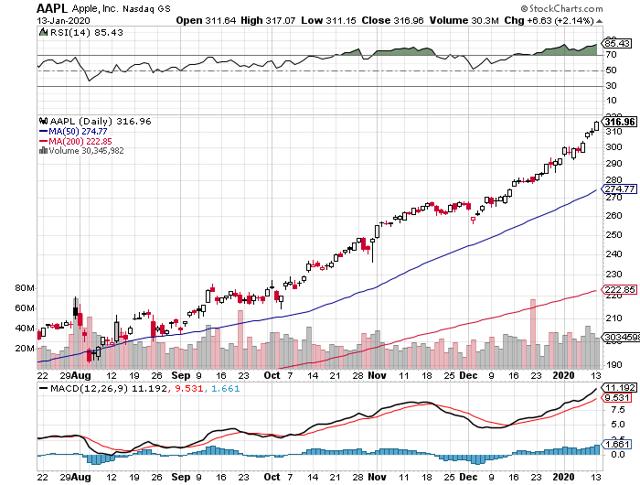 I don’t want to sell my Apple position, other than to trim shares to maintain my position limits, but it looks as expensive today as it was cheap in 2016. If I covered up the name of the stock on the chart above and told you that this company traded at 23x forward earnings and 5x sales, while expecting to realize 6% revenue growth and 10% earnings growth in the year ahead, would you buy it? I would not. I have five iPhones in my house and countless Apple devices, but I have no intentions of paying another $1,000+ for a new phone just because of 5G. Don’t get me wrong, I love the company and its products and services, but it’s a matter of valuation.

What is notable about the stock price surge for Apple, and the ever-more-bullish calls by analysts that have followed, is that this is not just an Apple phenomenon. In fact, Apple is just getting swept up in the frenzy. Surging valuations are pervasive throughout the marketplace for momentum stocks, but at even greater extremes. Apple is cheap when it comes to momentum.

Shares of Tesla (TSLA) have more than doubled over the past three months, which makes Apple look like a slow mover. This is not a small-cap stock, but an $85 billion market cap that is now the most valuable car company in the US. I know Elon Musk does lots of other cool stuff behind the scenes, but his company sells cars! Is it worth 81x earnings? Soon we will find out. Analysts are validating this valuation with comments like this one from Oppenheimer’s Colin Rusch, who just raised his target from $385 to $612:

“At the same time, we believe the company’s risk tolerance, ability to implement learning from past errors, and larger ambition than peers are beginning to pose an existential threat to transportation companies that are unable or unwilling to innovate at a faster pace.”

So now things like ambition and willingness to take risks are being used to calculate valuations, rather than revenues, profits and debt. This is right out of the 2000 playbook, as fundamentals were discarded for enthusiasm. 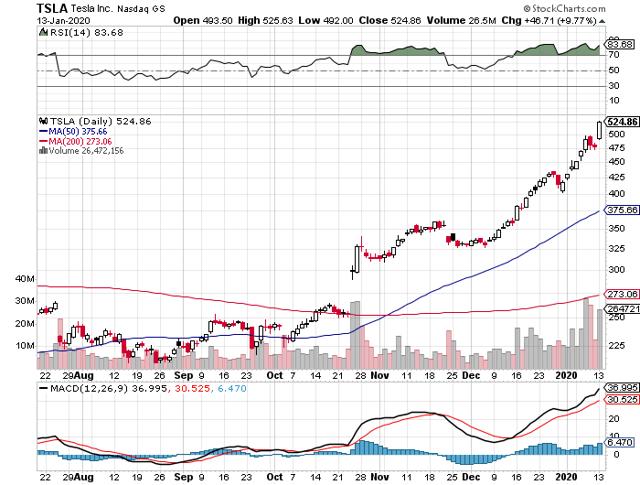 Beneath these and other behemoths that dominate the Nasdaq and S&P 500 are numerous smaller names that trade at multiples to sales, not earnings, of greater than 10. When I see a stock trading at 10x sales, I’m always reminded of what my father told me in the summer of 2000, during the early days of the Nasdaq collapse. He said, “never pay 10x sales for a stock unless you comfortable with 80% drawdowns.” He was a growth stock fund manager at the time. I’ve never forgotten that sage advice, but investors seem to be buying these stocks today like they are risk-free assets.

For example, Wingstop Inc. (WING) is a $2.6 billion market cap that trades at 100x earnings and 14x sales. They sell chicken wings. They must be damn good wings. I’ve never tried them, and I love wings, but I’m not buying the stock for a valuation that suggests they have a cure for a horrible disease that plagues a large percentage of the population. 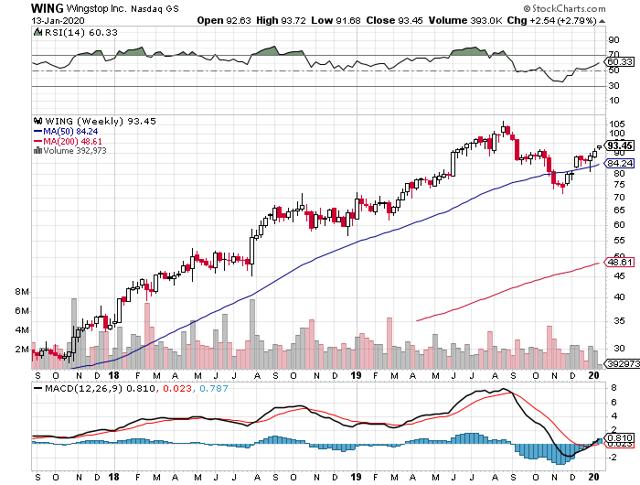 The rally in the stock market over the past year has been spectacular, and you didn’t even have to own technology stocks to benefit as a stock investor. The momentum stocks have created upward momentum for the entire market. Still, there are similarities between today and 2000 that should breed caution. The most important is the tremendous influence a small number of mega-cap companies have on all the major market indices. The other is the lack of fear.

I listen to seasoned market strategists and analysts opine about specific stocks and the broad market every day. I also read reports and market commentaries day and night. I can’t remember the last time I saw so little attention paid to the potential downside risks of investing in financial markets. The repeated line of defense is that the Fed’s got our back. Yet the Fed doesn’t have the best long-term track record when it comes to just about everything. This institution is the pumping heart of our boom and bust business cycle. I wouldn’t forget that.

I get the sense that investors who lived and invested through the 1990s, and experienced the two-year downturn that followed, are a little savvier today. Yet a Deutsche Bank measure shows positioning toward equities has only been more extreme by individuals 4% of the time. The last time was just before the huge sell-off in February 2018. This is another of many contrarian indicators that I have shared with readers in recent weeks. 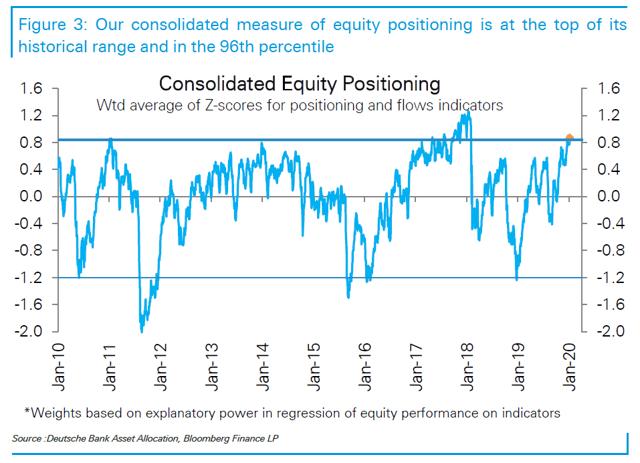 Lastly, there is one huge difference between today and 2000 that we need to keep in mind. Individual investors have been largely marginalized by computer programs, which has led to an era of long periods of low volatility, followed by sudden surges in volatility that lead to sharp price declines. Computer programs now account for as much as 90% of all trading on any given day. These programs are now as overweight as they have ever been through their systematic investing approach. We know what happens when they all hit the sell button at the same time. 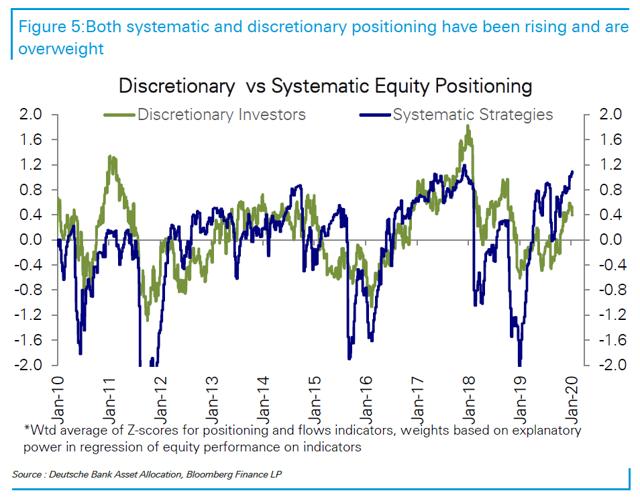 History may not repeat, but it often rhymes. I think playing good defense in 2020 may be a better strategy than focusing on offense, as there will surely be better buying opportunities from the extremes we see today. Investing is as much about managing risk as it is about taking risk.

Disclosure: I am/we are long AAPL, CSCO, INTC, MSFT. I wrote this article myself, and it expresses my own opinions. I am not receiving compensation for it (other than from Seeking Alpha). I have no business relationship with any company whose stock is mentioned in this article.