I assign a "Neutral" rating to Bangkok Dusit. Increased competition in the Bangkok market and losses from its new wellness center and high-end hospital are likely to be a drag on the company's earnings in the near term. On the other hand, Bangkok Dusit's Centers Of Excellence and the increased penetration of the insurance payer segment are expected to be key medium- to long-term growth drivers for the company.

Readers are advised to trade in Bangkok Dusit shares listed on the Stock Exchange of Thailand with the ticker BDMS:TB where average daily trading value for the past three months exceeds $20 million and market capitalization is more than $13 billion. Investors can invest in key Asian stock markets either using U.S. brokers with international coverage such as Interactive Brokers, Fidelity, Charles Schwab, or local brokers operating in their respective domestic markets. 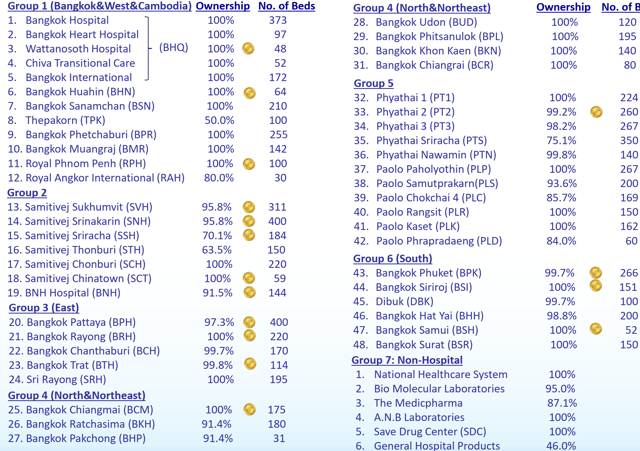 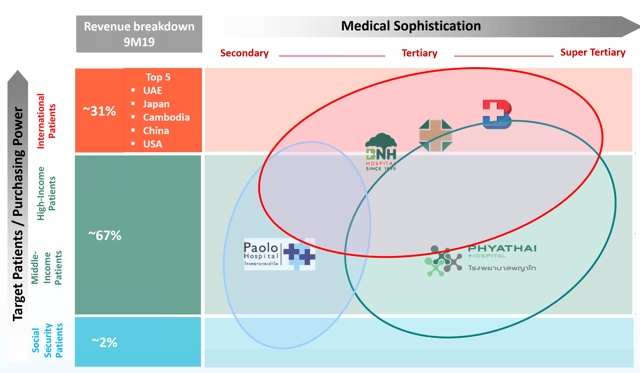 Increased Competition Expected In Bangkok Due To New Supply 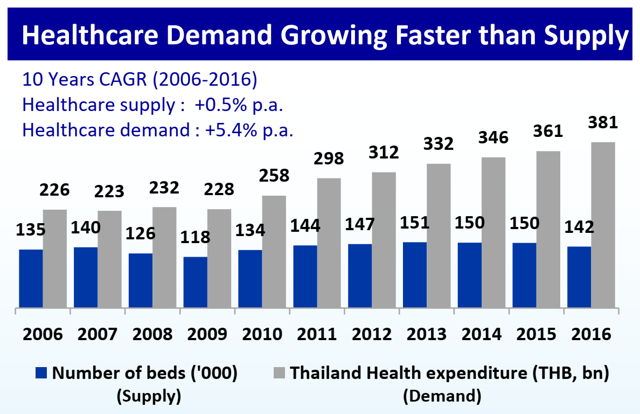 However, increased hospital supply is expected in Bangkok, Thailand's capital, which is potentially negative for Bangkok Dusit. The Bangkok market accounts for approximately 46% of Bangkok Dusit's registered beds as of end-June 2019. As per the chart below, Bangkok was already facing oversupply in 2018 with a ratio of 51 hospital beds per 10,000 people, compared with 23 hospital beds per 10,000 people for Thailand as a whole.

Supply Of Hospital Beds In Thailand By Region In 2018 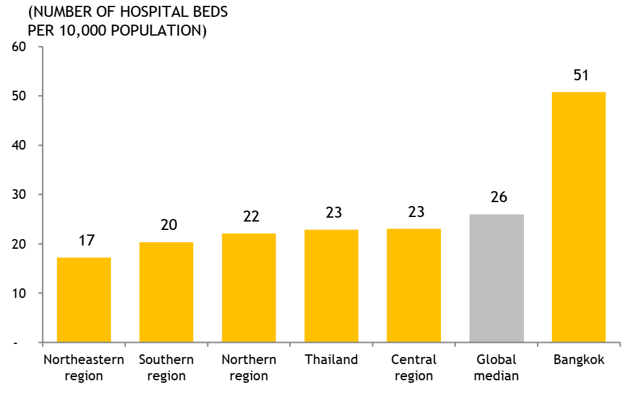 Starting in 2020, several new hospitals are expected to be opened in Bangkok, including private hospitals, Vimutti Hospital, Med Park and TPP Healthcare Hospital, and public hospitals, Piyamaharajkarun Hospital and Chulalongkorn Bhumisiri Hospital. Going forward, Bangkok Dusit could potentially lose patients to these new competitors; the company had an estimated 16% market share of the Bangkok in terms of the number of beds. The risk of stiffer competition is partly mitigated by Bangkok Dusit's upcountry exposure (54% of Bangkok Dusit's registered beds as of end-June 2019 are located in markets outside of Bangkok), and a longer time taken for new entrants to establish their reputation and gain the trust of patients.

Bangkok Dusit's core net profit for 9M2019, excluding a Bt6.1 billion gain relating to a divestment of a 38% stake in Ramkhamhaeng Hospital Public Company Limited, declined -2% YoY to Bt7,680 million, despite a +7% YoY growth in patient revenue to Bt59,323 million over the same period. Start-up losses associated with Bangkok Dusit's new wellness center (BDMS Wellness Center) and a new high-end hospital (Bangkok International Hospital), which opened in June and July 2019, respectively, were a drag on the company's profitability.

Bangkok Dusit also opened a new hospital, the 172-bed Bangkok International Hospital, which specializes in neurological, orthopedic and spine care, in July 2019. On the positive side of things, Bangkok Dusit is nearing the end of its planned hospital network expansion, operating 48 hospitals now as compared to its 50-hospital target. The company has only two new hospitals as part of its project pipeline, the 233-bed Jomtien Hospital (located in south-east Thailand in the Chonburi province focused on middle-income patients) and the 100-bed Samitivej International Children Hospital expected to open in 2020 and 2023-2024, respectively.

Upgrading Of Selected Hospitals To Become Centers Of Excellence

Apart from the new BDMS Wellness Center which plans to capitalize on growing health consciousness and demand for wellness and preventive care, another key cornerstone of Bangkok Dusit's strategy is its upgrading of 10 selected hospitals to become what it refers to as Centers Of Excellence focused on tertiary care. The Centers Of Excellence have developed and established a reputation for expertise in specific clinical areas like cardiovascular, neurology, and orthopedics. 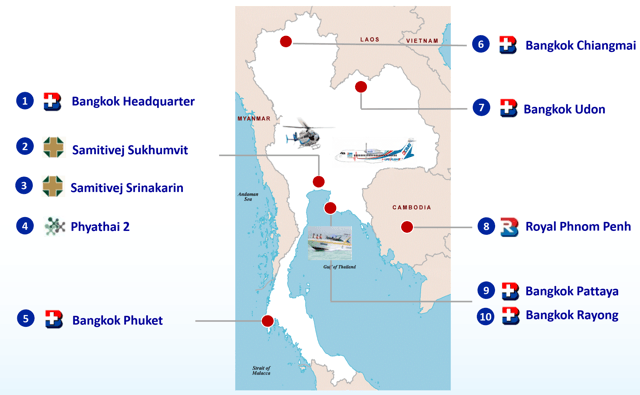 Bangkok Dusit has entered into new partnerships to drive further growth for the insurance payer segment. In May 2018, the company collaborated with insurance company, Allianz Ayudhya Assurance, to introduce My First Class @BDMS, a health insurance rider offering healthcare coverage at its hospitals. My First Class @BDMS is targeted at expatriates and Thai people in the upper-income segment with annual premiums ranging from Bt37,271 to Bt318,756.

In February 2019, Bangkok Dusit partnered with Viriyah Insurance to launch a new healthcare insurance program (exclusive to the company's hospitals) referred to as The Viriyah Insurance Program 3 (Delight). This is targeted at the middle income population with annual insurance premiums in the Bt17,664-Bt75,780 range. The Viriyah Insurance Program 3 (Delight) has both outpatient coverage (a maximum of Bt1,000 per visit for up to three visits per year) and inpatient hospitalization coverage (covering the doctor consultation fee in full and covering injury, sickness and accidents).

According to data from the Thai Life Assurance Association, insurance premiums relating to health and rider policies grew by +10% YoY in Thailand for 1H2019, despite a -6% YoY decline in total insurance premiums in Thailand over the same period. Leveraging on partnerships with insurance companies, Bangkok Dusit has the potential to further increase revenue contribution from the insurance payer segment going forward.